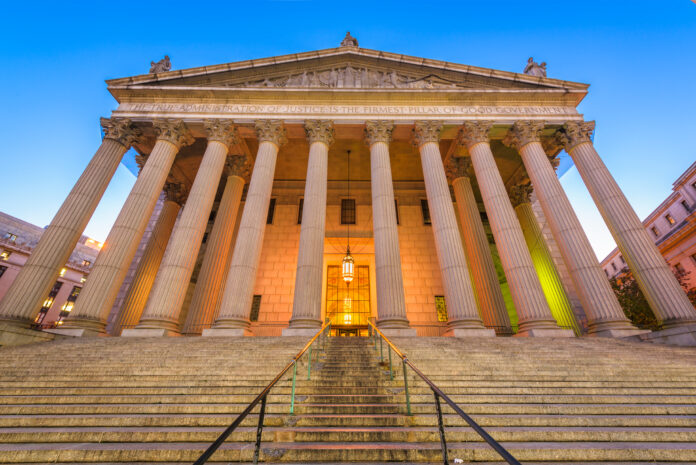 Judge Amy Coney Barrett is scheduled to face the Senate Judiciary Committee on October 12, less than two weeks from today. Committee Chairman Lindsey Graham (R-S.C.) has set an expedited schedule that allows the Senate to complete her confirmation to the Supreme Court before Election Day.

Between now and then, naturally, the Left will throw all the spaghetti they can find or invent against every handy wall, using every weapon remaining available to them in a desperate bid to delegitimize her confirmation. Because ultimately they cannot prevent it.

The Left’s weaknesses are that they have no substantive argument to make against Barrett, and no power to stop her confirmation. But unload on her they will. Be prepared for a very ghastly experience. Unintentionally hilarious at times, but always ghastly.

The Left’s strategy with the federal courts is shifting rapidly. Senate Dems used to lead with the claim that solid judicial nominees were “outside the legal mainstream.” In English, this means that Justices Clarence Thomas, Sam Alito, and Brett Kavanaugh take the constitution as written, and won’t bend it to progressive purposes.

But Senate Minority Leader Chuck Schumer (D-N.Y.) and his band, including especially the likes of Senator Dianne Feinstein (D-Calif.) have lost that fight. Almost no likely Democrat voter thinks or cares much about judicial philosophy, while the Right is widely and deeply energized by President Trump’s court nominations. That they are outside a long-gone mainstream of progressive legal hegemony is the point, Chuck and Dianne, not the problem. And with every successful Trump nomination, Clarence Thomas is more and more the mainstream now, and Americans increasingly recognize it.

Between the confirmations of Justices Neil Gorsuch and Brett Kavanaugh, the Democrats recognized that carping about judicial philosophy was failing to move the needle among moderates and the politically unengaged, while boring most of their own base back to their bongs. An activist core increasingly ready to disband police departments and burn cities down couldn’t care less about the finer points of statutory construction, or the relative merits of textualism or originalism.

The base they have cultivated doesn’t care about legal principles. What they care about are outcomes, the articles in their pseudo constitution: the sexual revolution, wealth redistribution, government micromanagement of markets, radical environmentalism, and above all the trope that the United States is a completely and unalterably racist nation which needs to be broken and remade in their Marxist image.

To the extent that the Left can rely on the Supreme Court to impose and preserve the substance of these pseudo constitutional outcomes, the Left likes the Supreme Court. For decades, “the Supreme Court holds such and such” has taken the place of the syllogism in every left-wing moral argument. It is understandable that they have done whatever they could do to deflect the Supreme Court from its slow but steady trudge back to the rule of law.

So when Trump nominated Kavanaugh, the Senate Democrats repeated an old play to both engage their base and try to buffalo Republicans away from supporting their nominee: they recycled their orchestrated smear of Clarence Thomas as an allegation of attempted rape with Brett Kavanaugh as the perpetrator.

Reflect on that for a moment. When faced with nominees who will change the philosophical composition of the Court for the better—that is to say, in keeping with the Constitution as it was actually written—phony sex scandals have been the Democrats’ weapon of last resort. Ghastly indeed. Thankfully, both times this gambit was tried, it failed.

A “Crisis” of Illegitimacy

Except that for a growing corner of the Left, these shameful theatrics have worked to addle their minds. The Supreme Court includes Justices Thomas and Kavanaugh (and will include Justice Barrett) to be sure, but more and more activists, legal academics, talking heads, “entertainers,” and politicians openly dismiss them as illegitimate. By extension, and increasingly, their decisions are taken as illegitimate. In legal terms, we are seeing a growing nullification movement on the Left. In more familiar terms, the Left is trying to cancel the Supreme Court.

So the attacks on Judge Barrett and her family will employ any tool that will induce the view that her accession to the Supreme Court is illegitimate. This will build on their view that Trump himself is not legitimate, and the supposed outrage of him nominating and the Senate confirming Barrett in short order before an election that might change party control of both the Senate and the White House.

The righteousness of Trump and McConnell’s sound decision to proceed on this timetable is amply demonstrated elsewhere; I need not repeat it here. But I will add that the Left’s howling in the darkness about timing is really their own despair at the late Justice Ruth Bader Ginsburg (God rest her soul) departing the Vale of Tears right now, of all times.

On the procedures, the only illegitimate approach being advanced is the Left’s, which is that this president may not nominate, and this Senate may not confirm any nominee, because … well, because it would suck for them.

But this procedural argument will fail, and after their decades of using procedures and sham sex scandals to thwart restoration of the rule of law in the federal courts, it couldn’t happen to a nicer group of people.

But that is not the end of the fight for the Left. Because Justice Barrett for Justice Ginsburg is not a one-for-one swap on the Supreme Court. She will replace a reliable left-wing vote—indeed, the intellectual leader of the Left on the court for decades—to create a Roberts-proof Rule of Law Block that should end the Left’s hegemony over the Court for a generation.

Because mind you, if the Court can’t be the source of their moral authority, they damned well aren’t going to peacefully transfer that power to the Right.

One can already see this shaping up on the Left with the grotesque fascination with the Haitian birth of Judge Barrett’s two adopted children. Professional Expert Anti-Racist Ibram Kendi tweeted that the adoptions may make Barrett a “white colonizer,” and her children “props of denial” whom she viewed as “savages” until she and her husband “civilized” them by teaching them whiteness. Ghastly.

On the more “academic” but still absurd side of the Left, claims are circulating that Judge Barrett wrote in a law review article that the 14th Amendment (which guarantees the state-level protection of the civil rights of all Americans regardless of color) “may not be legitimate.” It has been too easy to demonstrate that this is a gross misreading of the article even out of context, but that does not keep the Left from lobbing it around. Unintentionally hilarious, but still ghastly.

This is a preview of how the Left will try to tear down the very federal courts which they recently controlled. They will add them to the inventory of irredeemably racist institutions whose founding and entire purpose was always, and still is, to perpetuate white supremacy. The logic of fraudulent enterprises like the “1619 Project” and of the destruction of statues of Washington and Jefferson leads inexorably to the Supreme Court, whose century-plus old sins include the Dred Scott and Plessy v. Ferguson decisions. Never mind that both decisions are long since overturned, one of them by no less than the Civil War. Delegitimized the Supreme Court must be, and its long-ago history paired with the charge of irredeemable racism is as good a means as any to do so.

Scot S. Grant
Scot S. Grant is the pseudonym of a constitutional litigator living in California, where he has decided to fight it out instead of fleeing.