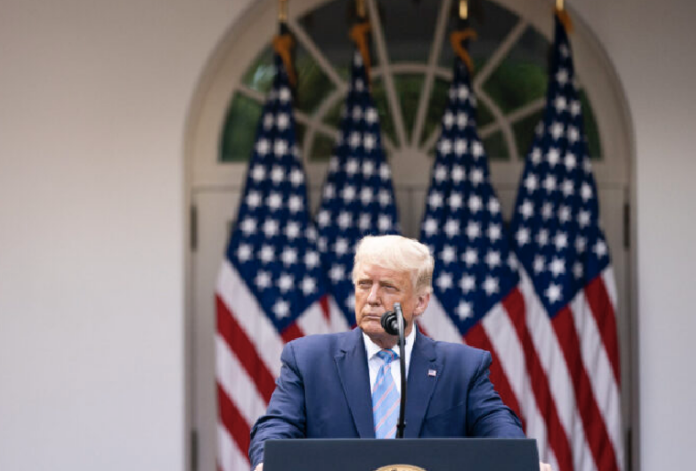 President Donald Trump returned to the White House after spending three days in the hospital where he underwent experimental treatment for COVID-19.

Trump, age 74, announced his infection and that of First Lady Melania Trump in the early morning on October 2, after a week of campaign events starting at the White House, then Pennsylvania, Virginia, the debate in Ohio, Minnesota, and New Jersey.

Later that day, Trump boarded Marine One to be taken to Walter Reed National Military Medical Center. In a video recorded before departure, Trump said, “I think I’m doing very well, but we’re going to make sure that things work out.”

Six days after admission, President Trump gave an 18-minute speech from a White House balcony to a crowd on the South Lawn and vowed to get back on the campaign trail as soon as possible.

On October 10, Trump’s physician, Sean Conley, gave the green light in a memo.

“This evening, I am happy to report that in addition to the President meeting the CDC criteria for the safe discontinuation of isolation, this morning’s COVID PCR sample demonstrates, by current recognized standards, he is no longer considered a transmission risk to others,” Conley stated.

In another memo, October 12, Conley stated the President is not infectious to others.

According to the CDC, people with mild to moderate COVID-19 symptoms remain infectious up to 10 days after symptom onset (Trump’s symptoms date back to Oct. 1, and he tested positive the same day).  Those with more serious cases remain infectious for up to 20 days.

In addition to Trump and First Lady Melania, at least 11 other White House personnel tested positive for the virus.

During his brief hospitalization, Trump received three treatments, two of which are available to the general public, the other of which is not.

The president received the antiviral Remdesivir, made by Gilead Sciences, Inc., and the steroid dexamethasone, both of which are now routinely used in treating hospitalized COVID-19 patients. He also received a monoclonal antibody treatment made by Regeneron Pharmaceuticals Inc. called REGN-COV2, which is still in clinical trials and is not yet approved by regulators. He also received zinc as part of his treatment.

Although many COVID-19 survivors have been treated with Remdesivir and dexamethasone, and some may have taken zinc, Trump appears to be unique by augmenting these treatments with REGN-COV-2.

The combination of the antiviral drugs was a puzzling choice, says Jane Orient, M.D., executive director of the Association of American Physicians and Surgeons and policy advisor to The Heartland Institute, which co-publishes Health Care News.

“These are experimental drugs,” Orient stated on the Heartland Daily Podcast, October 7. “They are in the testing stage. They have many side effects. I don’t know how they interact together. I have no reason to believe they should be dangerous given together, but we haven’t really tested that.”

Orient said she was surprised Trump was not prescribed hydroxychloroquine (HCQ), another experimental drug that has helped reduce illness for some COVID-19 patients. One such patient is Brazilian President Jair Bolsonaro, who openly disclosed the details of his HCQ treatment this summer when he was infected with the coronavirus.

“He said he was doing well and showed the pill bottle, and this would help to make it more likely that regular people could get the drug,” Orient said. “It is very safe and effective if used early and might obviate the need for more expensive and dangerous drugs later on.”

Trump told reporters in May that he was taking HCQ, but it is not clear if he was still taking the drug at the time of infection.

“The drug has a very long half-life, so it is likely there was a little bit in his system, which might have been helpful,” Orient said.

The president was also treated with Dexamethasone, a steroid that suppresses the extreme inflammatory reaction typical in COVID-19 patients.

Remdesivir, which was cleared by the FDA earlier this year for hospitalized COVID-19 patients, is an antiviral medication that keeps the virus from spreading in the body during an infection. REGN-COV2 mimics the naturally occurring antibodies that the immune system produces to combat pathogens, such as viruses.

The Role of Zinc

Trump is also widely reported to be taking zinc, which people can buy over the counter at the pharmacy.

Zinc has long been recognized as playing a key role in regulating metabolism and the immune system. Severe zinc deficiency “depresses immune function,” the National Institutes for Health (NIH) explains in a fact sheet for professionals.

“Even mild to moderate degrees of zinc deficiency can impair macrophage and neutrophil functions, natural killer cell activity, and complement activity,” NIH stated in the fact sheet. “The body requires zinc to develop and activate T-lymphocytes.”

The NIH adds that many of these problems can be corrected by zinc supplements.

Zinc deficiency is common in older people who tend to avoid consumption of red meat, a dietary source of zinc. Trump is famous for his consumption of steak and fast-food hamburgers, so his taking of zinc doesn’t appear to address an underlying deficiency, but it may have contributed to his body’s recovery process from the virus.

When Notables Get Sick

Trump’s speedy recovery—complete with a dramatic Marine One flight from Walter Reed back to the White House—contrasted with that of another world leader, British Prime Minister Boris Johnson.

Johnson’s hospitalization in the spring lasted two weeks, including several anxious days when he was in intensive care.  Johnson returned to work quickly after his release but has appeared somewhat hollowed-out and far from his customary flamboyant self. Trump, whose case was clearly milder, appears eager to get back on the campaign trail and is as combative as ever.

In either case, it is important to note that simply because well-known people get sick, it is not a sign of a monumental health threat, Orient says.

“If you get the disease, chances are better than 99.5 or .9 percent that you will get over it, just as the common cold or the flu, even if you’re old,” Orient said. “We are all going to die. There are all kinds of pathogens, and one of them, someday may have our name written on it, but in the meantime, we can’t live.”