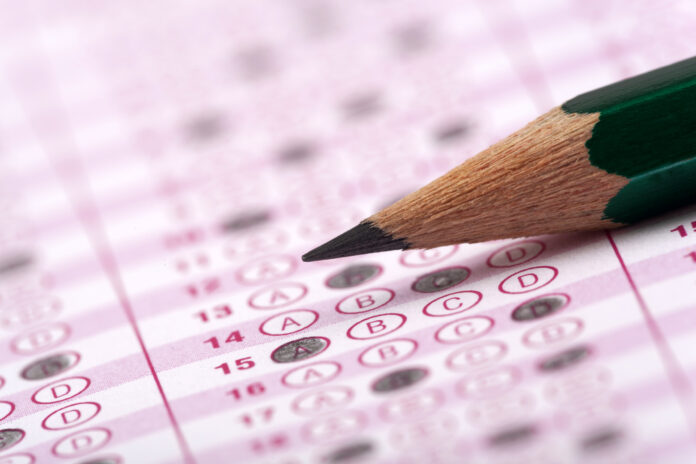 A federal agency is canceling congressionally mandated nationwide tests scheduled for 2021, ending the only way to reliably measure the effect of different school shutdowns across state lines until approximately 2023,  the agency’s commissioner announced the day before Thanksgiving.

“The change in operations and lack of access to students to be assessed means that NAEP will not be able to produce estimates of what students know and can do that would be comparable to either past or future national or state estimates,” said James Woodworth, the commissioner of the U.S. Department of Education’s National Center for Education Statistics, in a Nov. 25 statement.

The National Assessment of Educational Progress is a biannual test in reading and math that Congress requires states to participate in to get federal K-12 funding. Because states water down their tests to hide how poorly many American children are educated, and NAEP uses higher standards separated from politically manipulated policies such as teacher evaluations, it is considered the nation’s “gold standard” test. It has operated since 1969, and its next test window is early 2021.

Usually the test results fully come out in the calendar year after they are collected, meaning the postponement likely eliminates this important window into national achievement until 2022. That’s three years of hiding the truth about how governors have damaged American kids and our nation’s future while foreign competitors have kept their children in school because COVID is a low risk for young people.

On July 31, the NAEP’s governing board passed a resolution urging the commissioner to carry out the tests as legally mandated. It noted “in a time of such unprecedented disruption to education and assessment, there is a need to collect reliable and valid data to understand and compare student achievement across the nation, states, select large urban districts, and various student subgroups to support effective policy, research, and resource allocation.” It also noted that NCES had developed plans to safely administer the tests, and Congress was considering additional funding to make that possible.

U.S. Education Secretary Betsy DeVos has continued to require states to follow the law and administer their own annual tests. Yet she wrote in a Nov. 24 letter to Congress that she directed NAEP to cancel the 2021 tests as a consequence of governor and schools’ decisions to create chaotic schooling environments that complicate testing.

“The 2021 NAEP tests would have shed light on the significant learning loss following the school closures last spring and the widespread failure to reopen schools this fall,” DeVos wrote. “While the data would have been helpful, the much more valuable and actionable measures of learning loss will be the annual assessments required of states by the Every Student Succeeds Act. I strongly believe that states should implement their own assessments on schedule in spring 2021, given that they do not face the same constraints as NAEP and have ample time to plan for successful test administration tailored to their unique circumstances.”

In addition to participating in the biannual NAEP, federal law requires states to administer their own tests annually as a condition of receiving federal funds.  Woodworth noted that states will still be conducting their own tests this coming spring, asserting that is safer than having NAEP personnel do it.

He made no mention of having considered ways to still achieve the law’s objective of transparency in exchange for public funding for education by measures such as asking states to build NAEP questions into state assessments, having local teachers proctor their own classes for the NAEP tests, or using remote proctoring, which is common in higher education.

Historically, Republicans have made deals with Democrats to increase federal funding for K-12 in exchange for so-called “accountability” measures, most of which are tied to tests. With no consistent and reliable test results for nearing a decade now — testing was also both disrupted and rendered less useful with the massive Common Core overhaul President Obama forced on the nation — Democrats once again continue to achieve their objectives while requiring Republicans to forfeit theirs.

It’s long past time for Republicans to stop playing this game and release states from federal education meddling. It only works as a ratchet to the left. If states and federal agencies can ignore federal law “because pandemic,” and the Obama administration could ignore the law “because ‘progress,’” states can ignore federal education law because the U.S. Department of Education is unconstitutional.

Originally published by the California Political Review. Republished with permission.

Joy Pullmann
Joy Pullmann is executive editor of The Federalist, a happy wife, and the mother of six children. Her newest ebook is “The Family Read-Aloud Advent Calendar,” and her bestselling ebook is “Classic Books for Young Children.”