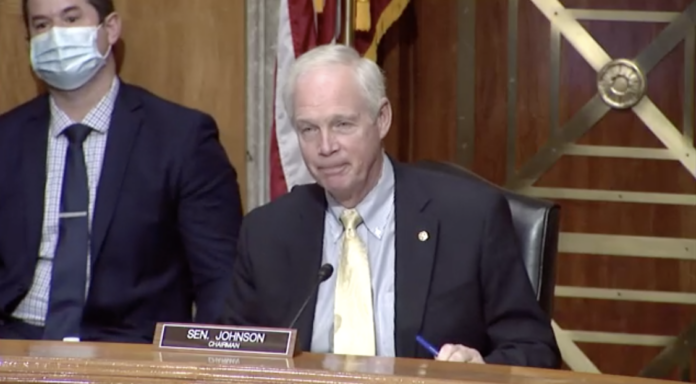 Ten out of 14 senators failed to show up for a second hearing on how off-patent drugs and other early treatments are keeping patients with COVID-19 alive and out of the hospital.

“The goal of this hearing is identical to the goal of our first hearing,” Johnson said in his opening statement. “[It is] to discuss early treatment options that attack the disease in the first state by limiting viral replication. Doing so would hopefully prevent progression to cytokine storm, micro thrombosis, and possible death.  This is how Tamiflu works in limiting the severity of the flu. It is how we approach every other disease.”

Attacked from the Get-Go

The nation’s approach to handling the pandemic has been anything but common-sense, stated Johnson. “We’ve impoverished millions by shutting down economies, poured billions of dollars into ventilator production and new drug and vaccine development, but spend virtually nothing on research and trials using existing drugs and nutraceuticals. In fact, there has been a concerted effort to clock doctors who actually treat COVID patients from compassionately using their ‘off label’ prescription rights for early treatment protocols. Why?”

Several of the physicians testifying took exception to Peter’s accusation that they are driven by politics.  Ramin Oskoui, M.D., a cardiologist who practices in the Washington, D.C. area and an adjunct faculty member at Georgetown University School of Medicine, testified that he was unclear why the U.S. Food and Drug Administration has done an about-face on encouraging physicians to use their professional judgment in finding new uses for safe, existing drugs.

“What happened with Covid?” asked Oskoui. “Why are practicing physicians being condemned or ridiculed for being ‘ahead of the research’- and why are they being prevented from prescribing these drugs against a disease the FDA does not yet have an officially approved treatment?” Oskoui said calling such practice “quackery,” is “medical McCarthyism.”

Another witness, Pierre Kory, M.D., and associate professor of medicine at St. Luke’s Aurora Medical Center, stated he was offended remarks that his testimony is politically driven. “I am a physician and a man of science. I have done nothing, nothing but commit myself to scientific truth and the care of patients.” Kory pointed out that his organization has published nearly 2,000 peer-reviewed publications on COVID and was attending the hearing to share new evidence on the effectiveness of the drug ivermectin for early state COVID treatment.

Another witness, Armand Balboni, M.D., PhD., chief executive officer at Appili Therapeutics, stated he is by no means an “anti-vaxxer,”  in reference to articles like one published in the New York Times. One such article on December 7, was entitled, “Elevating Fringe Theories, Ron Johnson Questions Virus Science.”

“I am a lifelong Democrat with a subscription to the New York Times,” said Balboni.

Science is an Open Mind

Sen. Paul, a physician who recovered from COVID-19, stated science is about having an open mind. “The back and forth is how we determine the truth.  Science is not about the attack,” stated Paul. “If you close your eyes, that’s how science dies, [when] you say the government consensus or the scientific consensus is this. That’s the closing of the scientific mind and a recipe for disaster.”

Paul brought up one concern about testimony defending the use of observational data. While such trials have shown compelling results on the use of early treatment, Paul asked how science can know whether or not the patients would not have gotten better on their own, with no intervention. Jane Orient, M.D., the executive director of the Association of American Physicians and Surgeons and policy advisor to The Heartland Institute, which co-publishes Health Care News, and a witness, responded.

“If you have something that is going to protect your Grandma if it works, and doing nothing is going to put Grandma at risk, then are you engaging in some kind of human sacrifice to use a placebo, said Orient. “The RCT (randomized clinical trial) is outdated and we should be looking at other statistical approaches, like Bayesian analysis so that we can get a good date without running into this ethical dilemma.”

Balboni responded that the nation should be encouraging “hybrid trial methodologies” to combine RCT and observational studies and that it might likely take a “private/public partnership,” when it involves off-patent drugs. “Single companies, as we hear, don’t have the ability or the incentive to run these trials. We are doing this at risk as a consortium,” said Balboni. “This has to be a whole of government approach and a commitment to going beyond this immediate problem.”

Johnson stated the Committee will be sending a letter to the National Institutes of Health requesting a review of the trials on Ivermectin.