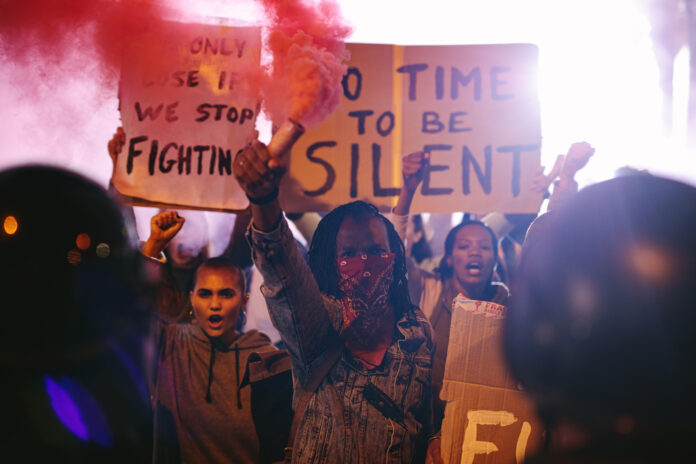 In Portland, President Biden’s inauguration sparked another day of unrest, where approximately 200 people marched through the city and smashed windows at Democratic Party headquarters, The Oregonian reports.

Over 150 extremists vandalized federal immigration buildings and attacked police officers in Portland, One America News Network reports. The mob chanted, “we want revenge,” and “we are ungovernable.” Additionally, some demonstrators carried signs that read, “We don’t want Biden, we want revenge.”

The building housing ICE agents was targeted. One of the organizers of the event told The Oregonian that their goal is to abolish the agency.

“We have to fight for that no matter who is president,” the organizer said.

In Seattle, a mob calling for the abolition of ICE marched through downtown damaging property the Seattle Times reports. They protested both former President Donald Trump and newly inaugurated President Joe Biden. An Amazon store and Starbucks shop were vandalized. Police made arrests for property damage, burglary, and assault.

“Hours after [President] Joe Biden called for unity, Antifa committed more acts of terrorism in Portland and Seattle. Should we have seen this coming? Yes, they literally promoted their violent riots…errr peaceful protests,” Jason Rantz tweeted.

“While Democrats pretend to take political violence seriously, only calling it out when conservatives infrequently engage in the odious form of activism, Antifa continues to roam the streets of their communities committing blatant acts of destruction,” Rantz writes in his tweets.

Many hoped the terrorism would stop when President Donald Trump left office, but flyers posted by Antifa groups continue to invite “affinity groups” to demonstrate, One News Network reports.

“The election of President-elect Joe Biden does not signal the end of violent anarchist group antifa, sometimes portrayed by sympathetic media as a national anti-Trump movement,” writes Paul Bedard for the Washington Examiner.

Attorney Luis Robles told Budget and Tax News that Antifa members think the law does not apply to them. Antifa activists try to remain anonymous, concealing their identity and hiding within the group environment. They have been getting away with criminal activity for months.

“Once they realize they have power, it’s like everything comes off the table and they feel they can’t be contained,” Robles said. “They think they will have no consequences.”

That mentality is reinforced by Antifa members’ disagreements with the direction of government, says Political Science Professor Lindsey Lupo in an interview with Budget & Tax News.

“When it comes to uprisings and more violent political activism, people tend to engage in these behaviors when they desire change, feel that the violence can be effective, do not support the government, and face a level of coercion (e.g. policing) that does not fully dissuade them from acting,” Lupo said. “With regard to the latter, this is why we don’t often see much anti-government activism in very repressive, non-democratic political systems, such as China.”

A growing concern is the United States’ growing political divide, with strong ideologies on either side. After the Capitol riot, the radical subsets of both groups have become concerning—but, as David Applegate points out in a commentary for Budget and Tax News, the capitol protesters did not attempt to hide their identity as Antifa does. Most of the extremists at the capitol have been identified, arrested, and charged with a crime.

“The concern among democracy scholars is growing anti-democracy sentiment on both sides of the ideological spectrum,” Lupo said. “On the left, there is some allegiance to Marxism, a political philosophy that has historically required totalitarian control and on the right, there is some support for ‘strongman’ leadership that disregards democratic norms and institutional checks and balances.”

The violence and hostility of rioters is causing more harm than most would assume, Robles says.

“The Marxist line is, ‘Workers of the world unite,’ but the real term should be, ‘Races of the world divide,’ because that is what they are really doing,” Robles said. “It’s the most subversive way to control people and destroy society.”

Radicals and rule breakers, regardless of party affiliation, are expected to follow the law.

“The law should be applied equally,” Robles said. “All of these breakdowns in the rule of law—it may seem small, but it is very profound.”