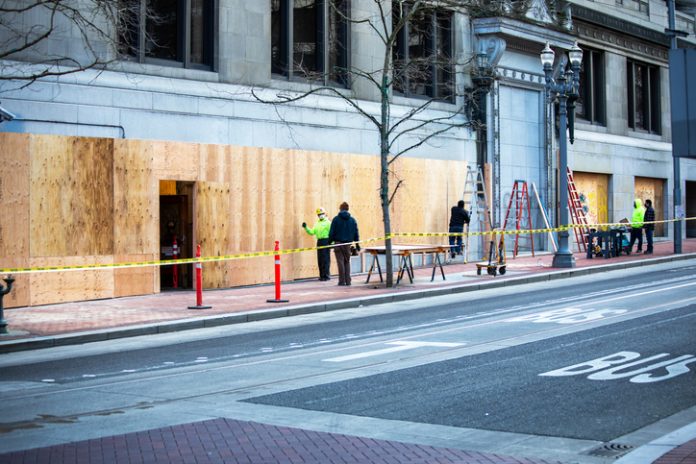 Wheeler’s request for more funds came after the death of a man shot in broad daylight, Fox News reports. Rising violence in Portland has been an ongoing problem since last summer, with cases of rioting, looting, arson, and attacks on police rising rapidly.

Last week a group of 50 Antifa rioters attacked the Federal courthouse, lighting fires while people were inside the building, The Federalist reports. Multiple rioters were arrested and detained.

The riot began as a rally calling for “the end of America” in support of descendants of indigenous people. Activists took over the lobby of a building and damaged private property. Others confronted a lone security guard in front of a Chase Bank branch. Others chanted “Death to America!” and “F— America!” while throwing water and other liquids at doors.

Seattle radio talk show host Jason Rantz told Fox News the far-left activist groups will continue to engage in violence and riots indefinitely unless the city implements a more aggressive response by police and actual consequences for the illegal activity.

“Now they say they are doing this over the weekend for Breonna Taylor,” Rantz said. “Before that, it was for indigenous people. In the coming weeks it’s going to be for George Floyd, but to be clear, they aren’t really interested in that. These are radicals who have an ideological agenda, and they’re using those issues for cover so they can engage in this kind of domestic terrorism.”

The anarchy and lawlessness have continued with almost no consequences for the bad actors, Budget and Tax News reports. If a progressive District Attorney, such as the one in Multnomah County, refuses to prosecute these crimes, criminals become emboldened, Rantz says.

“They are creating this kind of chaos on purpose,” Rantz said. “They are doing it because there are seldom any consequences.”

Wheeler’s request for funds would cover an additional police team of two sergeants and 12 police officers, plus the option to rehire retired police officers temporarily, The Hill reports.

An oversight committee is also included in the proposal. This group would comprise community members tasked with tracking and publishing the new police team’s arrest record and providing guidance on tactics.

The proposal now goes to the City Council, where passage is uncertain. Portland lawmakers have been a vocal driver of the greater national movement to defund police. Only a few months ago, the city voted to reduce the police budget and eliminate a gun-violence control unit.

No members of the City Council have expressed full support thus far for Wheeler’s plan for the partial reverse of police defunding.