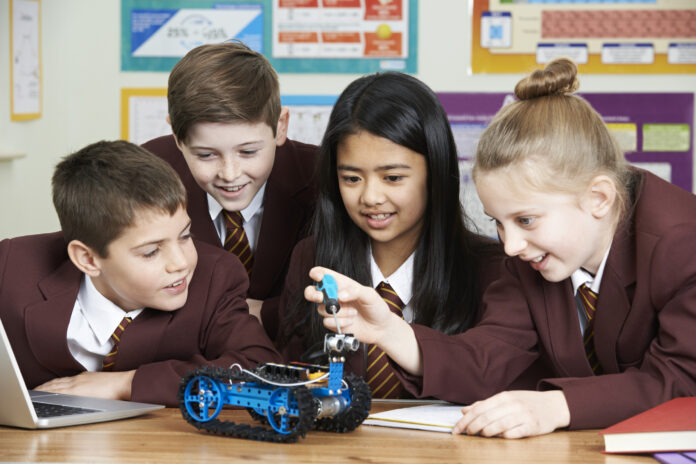 “American civic education should teach students how to be citizens” and help them find their place both in the “country and in the world,” says Bill of Rights Institute president David Bobb. He argues that the recently released “Roadmap to Educating for American Democracy,” an “inquiry-based content framework” for improving K-12 history and civics, can help to achieve this goal.

The Roadmap was the product of a 20-month collaborative process between members of Educating for American Democracy, a cross-ideological coalition of over 300 scholars, educators, students, and administrators funded by the National Endowment for the Humanities and the U.S. Department of Education. The Roadmap is organized around seven themes such as civic participation, “We the People” as a political idea, and the United States’ place in the world. It provides key historical and civic concepts for each theme, covering important topics such as the virtues necessary for republican citizenship. Additionally, it gives teachers sample questions grouped by grade level and five design challenges featuring topics that tend to be left out of classroom discussion.

David Bobb and Paul Carrese, director of the School of Civic and Economic Thought and Leadership at Arizona State University, were heavily involved in developing the Roadmap. According to Carrese, its creation was inspired by a “clear lack of adequate civics and history education” in the United States, a shift that was already taking place in the mid-1950s, when his father taught middle school history and social studies.

The Roadmap corrects this imbalance by helping teachers instill core knowledge and civic virtues, with the goal of developing “wise, prudent, thoughtful, and patriotic citizens,” Bobb says. It forges a “new community compact between teachers and parents,” Bobb continues, “based on presenting viewpoint diversity.”

Rather than attempt to secure a “mushy middle,” Bobb explains that EAD members “set aside the usual polarization” and grappled with differing views, ultimately finding compromise. “The Roadmap pulls national conversation to the center,” Carrese says, pointing out how most teachers reject ideological indoctrination in the classroom.

Both Bobb and Carrese argue that the key to creating thoughtful citizens is free and open debate. Bobb states that the Roadmap allows for “Socratic exchange, where students are invited” to become “conversant with the American political tradition,” growing in knowledge as they study and ask challenging questions. Ultimately, it “rekindles and reinvigorates civic friendship,” in Bobb’s estimation, because it promotes ideas and principles that Americans “hold in common,” which “can help us surmount many areas of disagreement.” Carrese maintains that by examining contentious questions – ranging from the Constitution’s relationship with slavery to the events of January 6, 2021 – the Roadmap immerses students in debates about America’s defining ideas.

The Roadmap, Bobb argues, does not implement a national curriculum – but it does challenge the “hegemony” of textbook cartels, giving teachers the freedom to “choose the curriculum for the best civic education.” The Roadmap was designed to give states and individual communities guidance to decide for themselves how they will implement it in their classrooms.

Neither Bobb nor Carrese – nor the Roadmap itself – endorses or encourages the idea of proselytizing teachers turning students into political activists or pushing critical race theory and “action civics.” As Bobb and Carrese note, however, teenagers do need to develop a strong voice of their own, considering that most will be voting by the time they graduate from high school. Carrese argues that focusing on important duties pertaining to citizenship doesn’t detract from highlighting vital civic knowledge.

Even with increased civic unrest in the United States, Bobb believes that educators have an important opportunity to revive civic education. Most Americans, he contends, still believe in Martin Luther King, Jr.’s dream – the idea that the Constitution and Declaration of Independence are “a promissory note to which every American was to fall heir.”

For Bobb and Carrese, the Roadmap signals the potential beginning of a civic rebirth – one whose success will hinge on parents, teachers, and school boards coming together for the good of students.

In these head-spinning times, first principles about government are all in play: what it’s for, and how it relates to the people. Not long ago,...
Read more
School Reform News

By Jarrett Stepman The revolt against indoctrinating students and other Americans with critical race theory is ramping up, despite left-wing denial and opposition. But a simple reaction...
Read more
School Reform News

By Jarrett Stepman The revolt against indoctrinating students and other Americans with critical race theory is ramping up, despite left-wing denial and opposition. But a simple reaction...
Read more

Shapiro: The Movement Against Critical Race Theory Is Deeply Necessary

According to the establishment media, critical race theory, or CRT, is a distraction. It is a right-wing smear. It is a conservative attempt to...
Read more
Load more