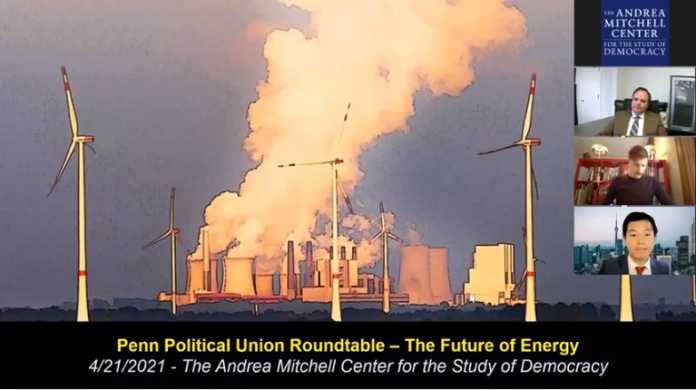 Below is a video from the University of Pennsylvania Political Union of a panel discussion and debate that President of The Heartland Institute, James Taylor, participated in last week regarding energy, environment, and climate.

From the Andrea Mitchell Center for the Study of Democracy:
4/21/2021 – AS THE U.S. AND THE WORLD GRAPPLE with the future of energy, they face a wide array of challenges and opportunities: growing populations, expanding consumer demand, deepening environmental and climate impacts; and, at the same time, new technologies both for generating cleaner energy and for more effectively extracting fossil fuels. Even as the Biden administration charts one path to the future, there are numerous alternatives. Join the Penn Political Union (PPU) as it welcomes five experts in energy policy for a panel discussion and debate:
THE PENN POLITICAL UNION (PPU) is an undergraduate organization formed in 2014 that features parliamentary-style deliberation on urgent contemporary issues. To represent a wide spectrum of political opinion, students affiliate with five member political parties: Libertarian, Conservative, Centrist, Liberal, and Progressive. The goal of PPU, in both debates and less formal discussions, is to fully represent political diversity while maintaining civility and openness to other outlooks.

The Heartland Institute greatly appreciates the opportunity afforded by the University of Pennsylvania Political Union to participate in this discussion. For more information about obtaining a speaker from our stable of experts on climate, energy, and environment, please contact us via our website at Heartland.org