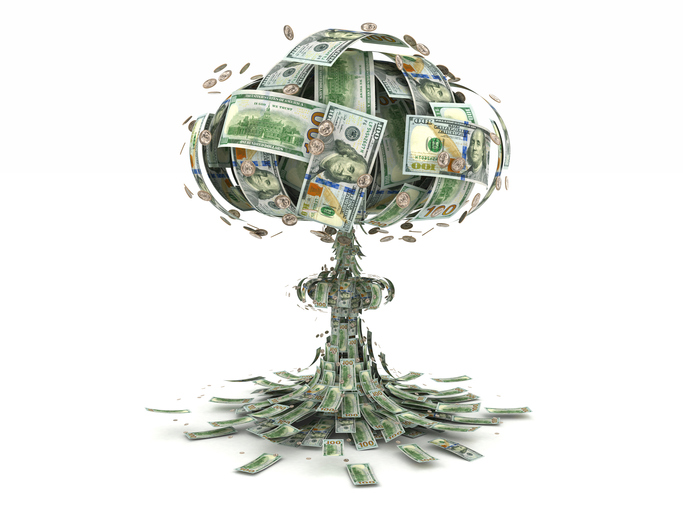 Economic data shows an explosive increase in incomes and spending. The Fed confirms it intends to keep purchasing federal debt to keep the party going. The hangover will be awful.

Not only did the economy soar going into the first quarter, but recent data indicate it is increasing at a faster pace going into the second quarter.

As expected, today’s report on consumer spending and incomes shows an explosive increase in March resulting from federal stimulus checks. Inflation in March rose sharply, up at a 4 percent rate without food and energy prices and a 6 percent rate for the total.

Weekly employment data continue to show declines in both initial unemployment claims and the number of workers receiving unemployment payments.

Next week’s economic reports will continue to show business activity increasing at a rapid pace.

The Markit business surveys show both manufacturing and service companies grew more rapidly in April than in March. As a result, the ISM survey due on Monday and Wednesday should show further strength.

On Friday, the jobs report should reflect the improvement shown in weekly employment
numbers.

The ongoing unprecedented strength in economic demand will continue to result in shortages and upward pressure on prices. Look for inflationary pressures to continue to build.

The stock market continued to roll this past week, with gains of 1 percent to 3 percent. Small cap indexes gained the most, with the Nasdaq close behind.

Biden’s $2 trillion of “free” handouts, follows his $2 trillion infrastructure bill, which followed his $2 trillion Covid-rescue bill. Free handouts seemed to work well last year in response to Covid, so why not up the ante?

The federal budget is soaring. Four years ago, the entire budget was $4 trillion. Last year it was $6.6 trillion. This year, who knows? The Fed promises to buy all the new debt, so why not party on. What could go wrong?

The first sign of trouble is in the first quarter GDP numbers. They show quarterly spending increeased at a 10.7 percent annual rate, the highest increase in spending in 37 years! Inflation was the highest in 14 years.

There is a problem with spending like drunken sailors. The economy isn’t capable of producing output at these rapid rates of spending. Shortages and inflation are inevitable.

The economy is still able to produce goods and services at a rate of increase of 3 percent to 4 per year. However, it won’t be able to do that with Biden increasing federal spending
and taxes.

These plans undermine growth by siphoning off productive spending. This why the progressive agenda has led to zero ecnomic growth the past five times it was tried.

Democrats are hoping the massive stimulus will produce enough free stuff to get them elected to congressional majorities in 2022 again without voters realizing the cost.

I doubt that it will work. Going overboard with “progressive” policies is likely to bring the hangover from this party sooner than they expect.

For now, the party will continue for both the economy and the stock market. In spite of the Fed’s hopes, however, shortages and rising inflation will produce higher longer-term interest rates, which will bring economic growth to a halt.