With state officials already warning that this year could be the worst wildfire season California has ever seen, Gov. Gavin Newsom is blaming “climate change” and “extreme weather” due to climate change, rather than prioritizing clearing away underbrush, thinning out forests, and allowing prescribed burns.

It’s going to be a long, hot summer.

In December 2017, Meterologist Anthony Watts published an article: “Is climate change REALLY the culprit causing California’s wildfires? Watts proved that the federal government’s own data showed wildfires had declined significantly since the early 1900s, undermining claims made by the media that climate change was making wildfires more frequent and severe.

Flash forward to 2021: Watts, a California Globe contributor, notified the Globe that the National Interagency Fire Center, the keeper of U.S. wildfire data for decades, tracking both the number of wildfires and acreage burned all the way back to 1926, has now “disappeared” a portion of it, and only show data from 1983. You can see it here.

The entire dataset was available to the public for decades, Watts says.

Why would the NIFC do this?

Watts explains in an article at Climate Realism:

By disappearing all data prior to 1983, which just happens to be the lowest point in the dataset for the number of fires, NIFC data now show a positive slope of worsening wildfire aligning with increased global temperature. This truncated data set is perfect for claiming “climate change is making wildfire worse,” but flawed because it lacks the context of the full data set. See figure 1 below for a before and after comparison of what the NIFC data looks like when you plot it. 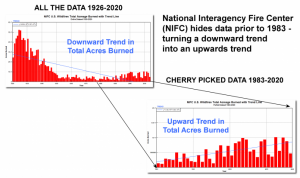 Watts says with the Biden administration now in control of NIFC, the agency now says:

“Prior to 1983, the federal wildland fire agencies did not track official wildfire data using current reporting processes. As a result, there is no official data prior to 1983 posted on this site.”

“This attempt to rewrite official United States fire history for political reasons is both wrong and unscientific.”

“The reason for NFIC erasing wildfire data before 1983 is not transparent at all. NFIC cites no study, provides no scientifically sound methodological reason to not trust the historic data that previously the agency publicized and referenced,” Watts said. “Indeed, NFIC provides no rationale at all for removing the historic data justifying any claim that it was flawed or incorrect.”

Katy Grimes, the Editor of the California Globe, is a long-time Investigative Journalist covering the California State Capitol, and the co-author of California’s War Against Donald Trump: Who Wins? Who Loses?

Katy Grimes
Katy Grimes, the Editor of the California Globe, is a long-time Investigative Journalist covering the California State Capitol, and the co-author of California's War Against Donald Trump: Who Wins? Who Loses?

COVID-19 – Is Your Doctor Foolish? – Commentary

Parker: Clarence Thomas and the Declaration of Independence