Moore: The Return of the Corporate Welfare State 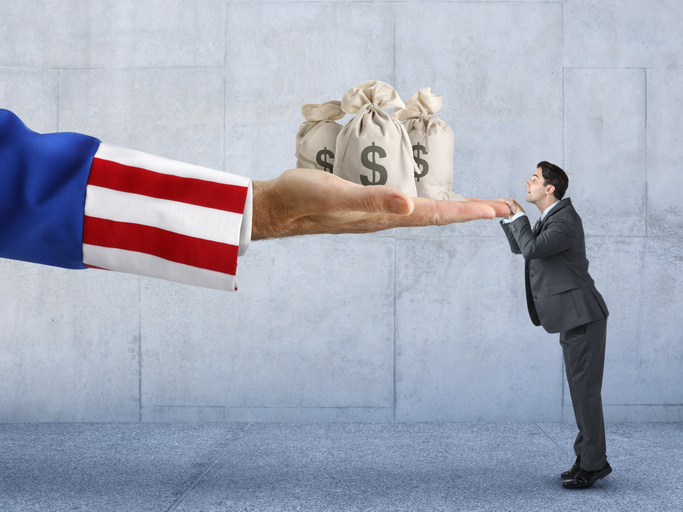 No one is paying much attention, but Washington is building up a vast new multitrillion-dollar welfare class: corporate America.

Deep inside President Joe Biden’s budget are hundreds of billions of dollars of loans, grants and loan guarantees for corporate America. This Aid to Dependent Corporations is most prevalent in the area of renewable energy. Despite more than $100 billion already doled out to wind and solar companies over the past 30 years, the Biden plan would enrich often-very wealthy investors in solar and wind plants with another $100 to $200 billion in the president’s green energy scheme.

For the past dozen years, we keep hearing how much cheaper and more efficient the wind and solar industries are becoming, and yet the subsidies keep getting more expensive and long-lasting. Explain that one.

Then there is another stash of tens of billions of taxpayer dollars for companies such as Tesla and Ford so they can make electric cars. The government will also spend billions for road recharging stations. Wait a minute. I don’t recall Uncle Sam paying to build gas stations across the country.

These are mostly Democratic initiatives, but Republicans are in on the gambit. In early June, the Senate passed by a 68-32 margin what CNBC has called “one of the largest (bipartisan) industrial bills in U.S. history.”

The idea is to shower money to manufacturers, semiconductor makers, tech companies and the military industrial complex to allow America to compete more effectively with China. The bill’s price tag is $250 billion.

Congress and the White House actually believe that politicians and government agencies can do a better job of allocating capital than our multitrillion-dollar financial markets and venture capital firms.

Brian Deese, the chief economist for the Biden White House, recently explained the rationale for erecting this new corporate welfare state: “The idea of an open, free-market global economy ignores the reality that China and other countries are playing by a different set of rules. Strategic public investment [corporate welfare] to shelter and grow champion industries is a reality of the 21st-century economy.”

That is a dangerous absurdity. If you believe this, you believe that Al Gore invented the internet. And what has the government “invested” in over the last 20 years that has had a positive return? The New York subway system?

Back in the 1970s, there was a big scare that Japan’s industrial policy, the Ministry of International Trade and Industry, would overtake America’s technological prowess. Liberals said we should imitate the hands-on policies of the Land of the Rising Sun. Instead, Ronald Reagan was elected, who cut investment taxes and cut government spending, and since then, the U.S. stock market has risen three times faster than Japan’s. It was almost all private sector-driven, with tens of trillions of dollars of wealth created by the revolution in innovation in places such as Silicon Valley.

The last big government venture to “partner” with private industry happened in the Obama years, when his trillion-dollar stimulus plan of 2009 wasted tens of billions of dollars on more than a dozen now-bankrupt companies such as Solyndra.

The quest to keep America dominant in 21st-century industries in robotics, bioengineering, manufacturing, 5G technologies, 3D imaging, artificial intelligence, fracking technologies, micronuclear power plants, and so on is an honorable one. But inventions and innovations almost never come from government; when they do, they often send companies on wild-goose chases as they hunt down “free” government dollars instead of selling private investment capitalists on their business models. Operation Warp Speed wasn’t so much a government-directed program as a deregulation to get a vaccine in people’s arms in record time.

If we want more investment, what is the logic of the Biden plan to raise taxes on private investment capital—through higher personal income, capital gains, and dividend and corporate tax rates? These will drain funding for private ventures and make investments in U.S. companies less attractive in after-tax returns relative to investing in other countries—such as China.

Dumbest of all is that while Congress ladles out trillions of dollars into new corporate welfare programs, we now have bipartisan bills to break up “monopolistic” big tech companies, including Amazon, Apple, Facebook and Google. These firms have market capitalization of more than $6 trillion, employ hundreds of thousands of American workers, and arguably do more to spur American innovation than all the government programs in the history of the United States.

Deese is dead wrong. China and its communistic economic system will not outcompete the United States in the 21st century unless we are dumb enough to tax our own successful companies, break them up if they are “too successful” and destroy our domestic energy industry. If politicians decide where investment dollars are going, we will soon be paying for hundreds of bankrupt Solyndras and our tech leadership really will be in mortal peril. Washington is a much greater threat to American supremacy right now than China.

Stephen Moore is a senior fellow at the Heritage Foundation and an economic consultant with FreedomWorks. He is the co-author of “Trumponomics: Inside the America First Plan to Revive the American Economy.” To find out more about Stephen Moore and read features by other Creators Syndicate writers and cartoonists, visit the Creators Syndicate website at www.creators.com.