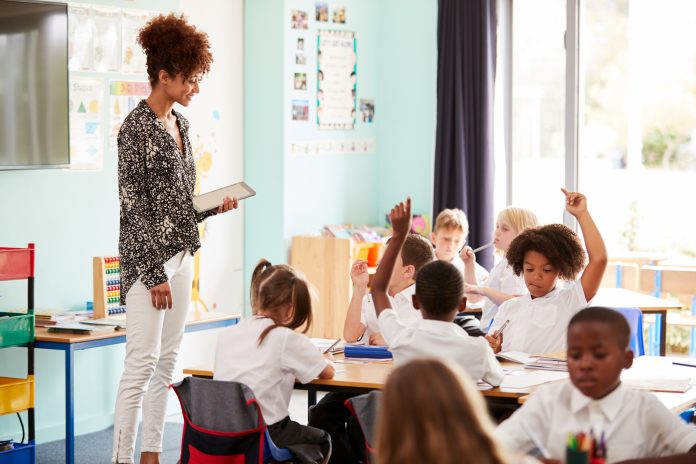 The U.S. Department of Education looked into critical race theory’s abyss and blinked.

In April, the agency proposed prioritizing the theory’s racially discriminatory ideas in a small federal grant program for K-12 schools. But after a “significant” number of comments to the announcement, the agency demurred earlier this week, saying it would not give a “competitive advantage” to applicants proposing to use critical race theory.

Hungarian philosopher Georg Lukacs once described critical theory, the neo-Marxist progenitor of critical race theory, as being “on the edge of an abyss, of nothingness, of absurdity.” Hardly a compliment—and that came from another Marxist.

President Joe Biden’s administration was prepared to embrace this absurdity and inject it into federal grants for history and civics instruction in K-12 schools, as his administration has done in other areas of federal policy.

Critical race theory is a philosophy that views everything in public and private life—from government to business to art and anything in between—through the prism of racial identities.

The worldview is based on critical theory, which originated in Germany after World War I and combined the Marxist belief of an oppressed working class with an opaque description of relative truth.

The philosophy swept through universities in the U.S. in the 20th century. In the 1960s, theorists claimed American law was systemically oppressive, creating critical legal theory. By the 1980s, theorists added race, giving us critical race theory.

Derrick Bell, one of the originators of critical race theory, wrote, “We use a number of different voices, but all recognize that the American social order is maintained and perpetuated by racial subordination.” Bell’s ideas echo today in the writings of Boston University professor Ibram X. Kendi, who says, “It is a racial crime to look like yourself or empower yourself if you are not White in America.”

Biden’s administration must have missed Kendi’s racially discriminatory ruminations when it recommended the professor’s work to K-12 teachers across the country in the original federal grant announcement for history and civics instruction.

Educators’ application of the theory to classroom instruction—including segregating students for school activities and considering a child’s race when making decisions about student sanctions for disruptive and even dangerous behavior—likely violates civil rights laws.

An opinion by Montana’s state attorney general, Austin Knudsen, agrees. In May, Knudsen said, “A school unlawfully discriminates on the basis of race if it has effectively caused, encouraged, accepted, tolerated, or failed to correct a racially hostile environment.”

Knudsen went on to say: “Notably, racial acts need not be targeted at any particular individual in order to create a racially hostile environment.”

School assignments, then, such as in Iowa City, Iowa, public schools that say white individuals have an unfair privilege that produces “white supremacy” in America—even if there are white students who condemn racism—arguably violate federal laws.

The Education Department’s proposed changes to the grant program to add critical race theory generated some 35,000 comments, and the department backed away from adding it to the program’s priorities on Monday. Anyone who opposes racial discrimination should welcome the agency’s retreat.

The sheer number of federal grants—in education and other policies—and the administration’s prior statements and actions aligned with critical race theory’s prejudice mean the task remains for everyone to hold this administration responsible for following the Civil Rights Act of 1964.

Education Secretary Miguel Cardona wrote in his statement on the agency’s decision to temper its adherence to critical race theory that his department will “continue our work providing engaging, innovative learning opportunities to students, in order to build stronger societies and better futures for all communities.”

His agency could start by making sure this and any other grant program does not overtly or covertly promote discriminatory theories with Marxist roots.

To create “better futures for all communities,” focus on giving students the skills they need to be successful in school and in life. No one will balk at that idea.