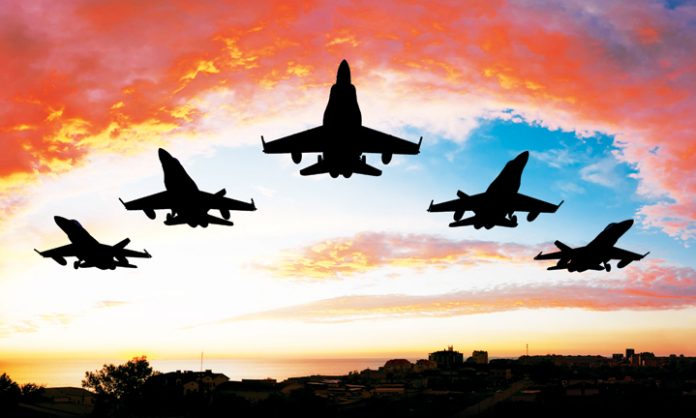 The Texas legislature took steps to stop a massive Chinese-owned industrial wind facility from being built near Laughlin Air Force base in southwest Texas.

The Blue Hills Wind development attracted attention because its developer, GH America Energy, is the U.S. subsidiary of the Chinese Guanghui Energy Company which is owned by Sun Guangxin, a Chinese billionaire who reportedly has ties to the Chinese Communist Party (CCP).

As planned, the industrial wind facility will be sited on 140,000 acres of land approximately 70 miles from Laughlin Air Force Base, raising concerns the CCP will be able to spy on or interfere in U.S. flight training and operations.

Legislators also raised concerns the power supply to the base could be compromised or made vulnerable.

“Our greatest concern is the long-term implications this will have on the Air Force’s mission of pilot training not with a single application, but rather a cumulative strategy that cannot be evaluated in the first filing,” Val Verde County Judge Lewis G. Owens Jr. and Del Rio Mayor Bruno Lozano wrote. “We believe that this project and all future projects of a similar nature will result in unacceptable risk to national security of the United States.”

“It has long been my priority to protect the State of Texas,” Campbell told Environment & Climate News. “As chair of the Veteran Affairs and Border Security committee, I have the honor and unique responsibility of protecting the citizens and service members of this great state.

“Just as a service member swears an oath to protect this nation and state, so too have I sought to do this through Senate Bill 2116,” said Campbell. “In the wake of February’s historic storm, and several attacks on infrastructure within the United States, I have taken a more active role in securing our critical infrastructure, and SB 2116 is part of that effort, by actively prohibiting foreign adversaries from taking advantage of critical infrastructure in our the state.”

Texas is critical to the America’s national security, says Campbell.

“Texas is one of the most strategically important states in the country, with the 9th largest economy in the world, and over 15 military installations,” said Campbell. “Unfortunately, this makes Texas a target for foreign adversaries, and we must ensure hostile nations seeking to harm our state are prevented from connecting physically or remotely into our critical infrastructure systems.”

“The recent Colonial Pipeline Cyber-attack showed that our critical infrastructure systems are not as secure as we need them to be,” Campbell said. “Not only must we learn from these failures, we must address them. Senate Bill 2116 puts our state on the right track.”

Texans should be concerned China could exploit our state’s electricity grid and disrupt operations, says Jason Isaac, director of Life:Powered, a project of the Texas Public Policy Foundation.

“If you thought 4 million Texans losing power during the worst freeze in recent memory was bad, just imagine the chaos a coordinated attack on our electric grid would cause,” said Isaac, a former state representative. “The Chinese Communist Party has a history of creating intentional vulnerabilities in technology, and companies that connect to the grid are given access to privileged and confidential information, including threat response protocols.

“Because electricity and internet access play such a critical role in our lives–not to mention our national security–we should take every precaution to make sure our grid is protected from the real possibility of a cyberattack,” Isaac said.

The threat from China is too great to allow this project to be completed, says Mark Mathis, founder of the Clear Energy Alliance.

“How is it possible this project was ever even considered,” asked Mathis? “Why would we allow any nation–let alone Communist China–to purchase such a large tract of land near a military installation?

“The Chinese Communist Party is spreading its tentacles around the world,” said Mathis. “China is on a fast track to replace America as the world’s dominant power, yet members of the interagency Committee on Foreign Investment in the United States seem so obtuse that they can’t imagine our most threatening adversary using this facility to compromise our energy and national security in more ways than we can even identify.”

It is good Texas took what steps it could to prevent this dangerous project, especially in the light of federal inaction, Mathis says.

“Let’s hope the Texas legislature’s action can stop Blue Hills in its tracks, because the whole thing is beyond outrageous,” said Mathis.