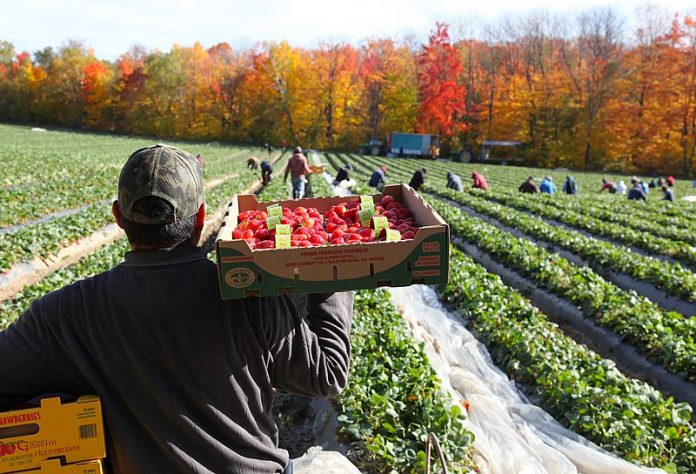 In one of the most closely watched property rights cases in recent memory, the Supreme Court of the United States ruled a California regulation giving union organizers access to workers on the private farms in the state violates the constitutional rights of the property owners.

The June 23 decision came in the case of Cedar Point Nursery v. Hassid.

In 2015 organizers from the United Farmworkers of America (UFA) entered the property of Cedar Point Nursery, a strawberry growing operation in Northern California, in an attempt to persuade the 3,000 employees of Cedar Point and Fresno-based Fowler Packing Company to join their union.

Property owners have the right to exclude trespassers from their property, but California’s 1975 Union Access Regulation, created by the state’s Agricultural Labor Relations Board, required farm owners to allow union organizers onto their property for three hours a day, 120 days a year for organizing activities.

The regulation was upheld by the California Supreme Court in a 4-to-3 decision in 1976 and had gone unchallenged since then, until the UFW organizers entered Cedar Point’s property without permission during the 2015 harvest.

At the time, Mike Fahner, owner of Cedar Point Nursery, didn’t even know the regulation existed, because his workforce had shown no interest in unionizing.

California’s regulation violated the nursery’s property rights protected by the Fifth Amendment of the U.S. Constitution, said Roberts in his majority opinion, finding the nursery must be compensated

promotion of individual freedom,” wrote Roberts. “The Takings Clause of the Fifth Amendment, applicable to the States through the Fourteenth Amendment, provides: ‘[N]or shall private property be taken for public use, without just compensation.’

“The right to exclude is ‘one of the most treasured’ rights of property ownership,” wrote Roberts. “The access regulation appropriates a right to invade the growers’ property and therefore constitutes a per se physical taking.”

“Rather than restraining the growers’ use of their own property, the regulation appropriates for the enjoyment of third parties the owners’ right to exclude,” wrote Roberts. “The upshot of this line of precedent is that government-authorized invasions of property – whether by plane, boat, cabal, or beachcomber – are physical takings requiring just compensation.”

The Supreme Court’s ruling affirmed all private parties must comply with the U.S. Constitution, said the PLF, in a statement.

“Today, the Supreme Court … affirmed that the government cannot force people to allow third parties to trespass on their property,” said PLF. “[Union Organizers] have no special right to invade private property and disrupt commercial operations, and property owners have a fundamental right to exclude trespassers … [and] [g]overnment can’t make a regulation violating that right even if it limits the hours when it applies.”

The court’s ruling is an important win for property owners, says Daren Bakst, a senior research fellow in The Heritage Foundation’s Institute for Economic Freedom.

“The court has made it clear that excluding who can enter your property is a fundamental element of private property rights, and government can’t simply modify this right when it feels like it,” Bakst said “If the government is going to allow an invasion of private property, as the California regulation did for labor organizations against farmers, it will be deemed a per se physical taking, requiring the payment of just compensation.”

Bonner R. Cohen, Ph.D., (bcohen@nationalcenter.org) is a senior fellow at the National Center for Public Policy Research and a senior policy analyst with the Committee for a Constructive Tomorrow.