In Boston, a ten-foot-wide “skinny house” went on the market two weeks ago for $1.2 million, a 33 percent gain over the last time it sold four years ago. That’s more than $1,000 a square foot for what the realtor says is a 1,165-square-foot home (though Zillow says it is only 800 square feet). The house sold in one weekend for an undisclosed amount. 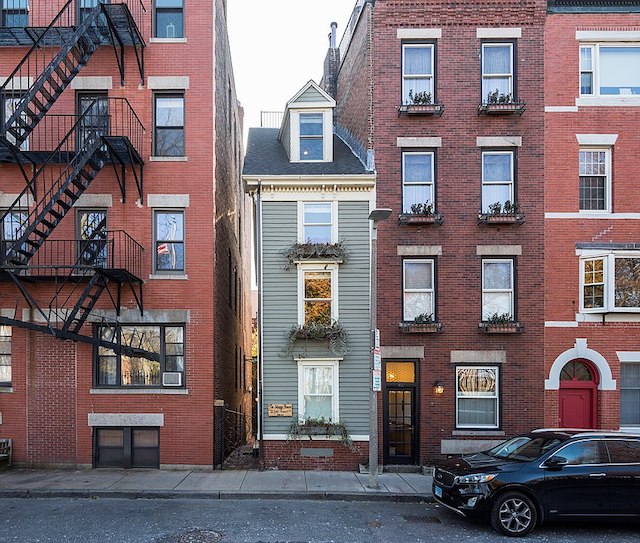 Sold for at least $1.2 million. Photo by Rhododendrites.

Bidding wars in San Francisco suburbs are setting records for premium prices above the asking price. Nearly 7.5 percent of homes are sold for more than 30 percent of the list price.

All over the country, housing markets are going crazy, even in sedate places like Philadelphia. If you have a house to sell, now is the time to put it on the market; if you want to buy, it is probably better to wait.

This housing frenzy is due in part to the coronavirus. More than one out of ten Americans moved in the year after the pandemic began, says Zillow. This is unusual enough that Zillow called it “the great reshuffling.”

“The main driver is that people want more space, prompting higher sales of luxury, suburban, and rural homes,” says an economist at Redfin. However, reducing the risk of exposure to infections is also an issue: many people are buying homes without visiting them in person in order to minimize risk of exposure to the virus. Such people are going to take exposure risk into account when deciding where to live.

Affordability is also an issue. Census data show that, between 2010 and 2020, California had negative domestic in-migration (meaning more Americans moved out than moved in), while the highest in-bound moves in 2020 were in Arizona, North Carolina, and Texas, which are among the most affordable states.

Like so many effects of the pandemic, this one merely accelerated pre-existing trends. In 2006, an urban planner named Arthur Nelson claimed that Millennials and other younger generations didn’t want to live in single-family homes and predicted that, by 2020, the United States would have millions of surplus suburban homes, apparently crumbling away.

On one hand, Nelson clearly didn’t understand the basic law of supply and demand. Beyond that, his predictions were also completely wrong. Even before the pandemic, Millennials accounted for more than half of all home loans, and their purchases of single-family homes only accelerated during the pandemic.

Despite Americans’ clear preference for single-family homes, cities are still planning and subsidizing so-called transit-oriented developments and other attempts to increase densities. Planners even want California to reauthorize tax-increment financing so they can give even more subsidies to high-density developments.

Here’s a clue: if you have to subsidize it, then that means people don’t really want it. Don’t try to convince yourself that there is demand for something that only gets built if there are enough subsidies.

Developers are able to rapidly respond to changes in market demand, at least if they are not hampered by government regulations. Urban planners, however, are still enthralled by a form of housing that was obsolete a hundred years ago. This makes them completely unwilling to learn from all the information the current housing market is telling them.