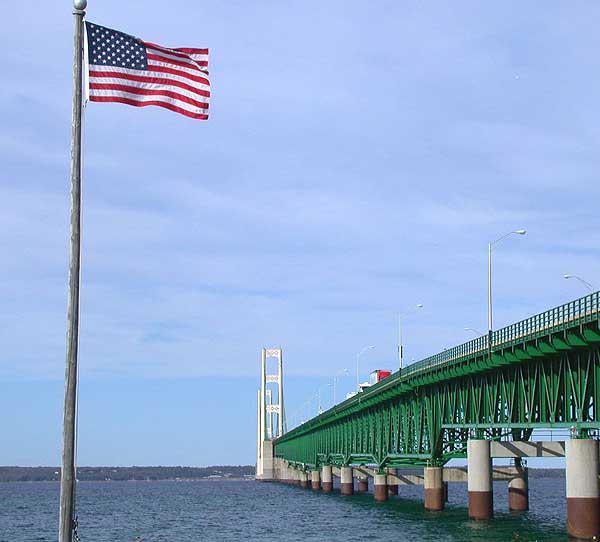 Michigan Gov. Gretchen Whitmer’s executive order mandating that Canadian pipeline operator Enbridge shut down its Line 5 is on hold following a decision by U.S. District Judge Janet Neff to reject the state’s request to remand the case to state court.

Enbridge Line 5 is a major oil pipeline in operation since 1953. The pipeline delivers 540,000 barrels per day of crude and refined products from Superior, Wisconsin, to Sarnia, Ontario, via the Straits of Mackinac in the Great Lakes.

This lawsuit has interstate and international implications which is why it should be heard in Federal court, Neff ruled.

“The State Parties’ claims ‘arise under’ federal law because the scope of the property rights [they] assert necessarily turns on the interpretation of federal law that burdens those rights, and this Court is an appropriate forum for deciding these disputed and substantial federal issues,” said Neff.

Despite Neff’s ruling the pipeline’s ultimate fate may not be decided in federal court. Whether Line 5 will continue to operate or be improved and expanded may ultimately be decided in bi-national discussions that are ongoing between the Biden and Trudeau administrations.

In the meantime, the Biden Administration has pledged to place Enbridge’s long-term plan to construct a tunnel to house a rebuilt section of pipeline under the straits under strict environmental review. This move could result in major delays regulatory delays in the construction of the replacement pipeline.

Whitmer claims the underwater section of the pipeline could leak into and damage the Great Lakes.

Based on this fear, she issued an executive order revoking an easement issued in 1953 allowing Line 5 to cross the Straits of Mackinac. When Enbridge ignored the order, Michigan Attorney General Dana Nessel in November 2020 filed suit in Ingham County.

Enbridge in return filed to remove the case to federal court, arguing only the federal Pipeline Hazardous Materials Safety Administration (PHMSA) has jurisdiction and the authority to order the pipeline’s closure.

Voluntary mediation between Michigan and Enbridge ended without a settlement.

The Canadian government filed an amicus brief asking Judge Neff to stall the state-ordered closure, in May 2021.

Canada argued there has not been a major pollution event involving the Mackinac Straits in the pipeline’s 68-year history and that PHMSA’s 2019 and 2020 monitoring and in-line inspections found no unsafe or hazardous conditions in Line 5.

The brief also cited the 1977 Transit Pipeline Treaty, which states in Article II that, “No public authority … shall institute any measures … which are intended to, or which would have the effect of, impeding, diverting, redirecting, or interfering with in any way the transmission of hydrocarbon in transit” between the two nations.

Canada then invoked Article IX of the treaty, requiring national governments of Canada and the United States to settle any disputes regarding the interpretation, application, or operation of the agreement by negotiation, and, failing that, through arbitration at the request of either party.

Court filings indicate there are ongoing “high-level” diplomatic discussions about the pipeline’s future in both Washington, D.C. and Ottawa – but no formal arbitration.

In its amicus brief, Canada asserts “a hastily and unduly imposed shutdown” would harm both countries’ economies and undermine the confidence in reciprocal, enforceable, bi-lateral commitments at the heart of the United States-Canada relationship.

“A shutdown of Line 5 would cause certain, immediate and serious harm to several important public interests,” said Canada’s brief. “Central Canada and parts of the northern United States, would lose relatively safe, efficient, and reliable access to fuel that is essential to the Toronto and Detroit Airports, to businesses that employ thousands of people in Ontario, Quebec, Michigan, Ohio, and Pennsylvania, and to the propane supply on which many residents in Michigan rely for heating and cooking….

“In short, businesses, employees, consumers, and potentially the environment, would suffer,” Canada said.

Pipelines are the safest way to ship oil and gas and closing the Line 5 would result in an increased risk to the environment, said Ryan Duffy, an Enbridge spokesperson.

“Pipelines continue to be a safer, more reliable way to transport fuel than truck, train or barge…,” said Duffy. “Line 5 has operated safely for more than 68 years at the Straits of Mackinac providing the Midwest and the Great Lakes Region with a much needed source of energy.

“To have that threatened by a single governmental entity creates concerns about energy security as winter approaches and the economy as the region looks to re-emerge from the pandemic,” Duffy said.

Whitmer’s position is ridiculous and dangerous, says Jason Hayes, director of environmental policy at the Mackinac Center for Public Policy in Michigan.

“Rather than trying to shutter a vital pipeline, it would be better for the environment and the economy, to keep the current pipeline open while expediting Enbridge’s plan to build a utility tunnel that would replace and relocate the portion of the Line 5 pipeline running beneath the Straits of Mackinac,” Hayes said. “The waterways of the Great Lakes would be better protected and an essential piece of the region’s and nation’s energy infrastructure, and the employment and economic benefits it provides, would be secured for years into the future.