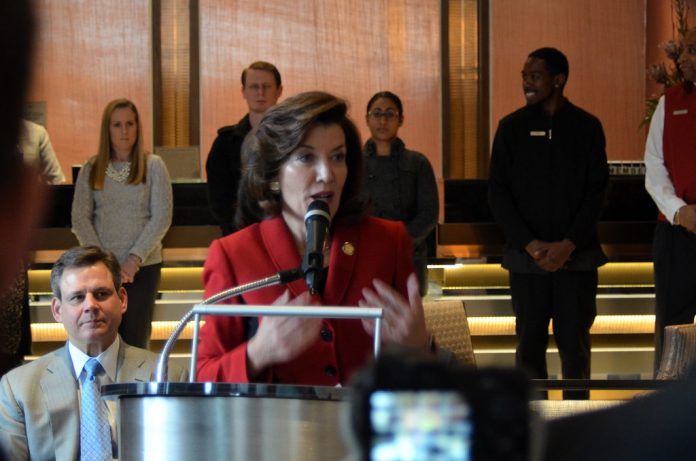 (The Center Square) – New York Gov. Kathy Hochul signed the bill resetting the state’s congressional districts into law Thursday evening, and not long after that, 14 residents filed a lawsuit in a state court seeking to block its implementation.

Republicans have howled at the redistricting process. They claim Democrats used gerrymandering to design the new map to give them an even greater advantage in upcoming elections.

An analysis by FiveThirtyEight indicates Republicans would hold advantages in four of the 26 proposed districts. The party currently represents eight of the 27 seats in Washington.

In the lawsuit filed in a Steuben County Supreme Court, residents said state lawmakers and officials failed to follow the constitutional amendment voters passed in 2014. That amendment established an independent panel to design districts in a fair and nonpartisan manner.

However, the panel failed to reach a consensus on a new congressional map. That prompted the Democratic-led New York Legislature to take up the process itself in time for the upcoming primary and general elections.

Starting in 2023, New York will have 26 congressional districts, one fewer than it had over the past decade.

In the suit, the residents make two separate arguments. First, they claim that lawmakers did not follow the process voters called for in 2014, and as a result, the new map should be nullified. In turn, they ask for the court to “expeditiously” redraw the map.

However, should the court find that the legislature acted within its authority to redraw the map, the plaintiffs want the courts to reject what the Democratic lawmakers designed.

“…the map is an obviously unconstitutional partisan and incumbent-protection gerrymander,” the suit states.

In a floor speech Wednesday supporting the redistricting effort, state Senate Deputy Majority Leader Michael Gianaris, D-Brooklyn, criticized Republicans for their work in setting up a process he said was designed to fail.

“When you set up a commission with equal numbers of both parties, you’re going to get deadlock,” he said. “So, if you don’t like what was designed, you shouldn’t have designed it that way. We wouldn’t have done it that way. We’re just dealing with the process that you handed us when we succeeded in taking you out as the majority.”

Originally published at The Center Square. Republished with permission.