A Life-Changing Meeting of Minds

In 1985, Roosevelt Montás arrived in the United States aged twelve, speaking no English, accustomed to life in a rural mountain village of the Dominican Republic where he had passed his boyhood—a village with one shared telephone. Six years later, he matriculated to Columbia University. He went on to earn his PhD there, and subsequently joined the faculty in the Core Curriculum, one of the very few remaining Great Books programs to be required of all students. Montás calls it a “relic.”

Montás’s book Rescuing Socrates: How the Great Books Changed My Life and Why They Matter for a New Generation is both an apologia for the study of great books and the story of his moral and intellectual development. “My thinking about my education is inseparable from my particular experience,” Montás writes, and “the driving force behind this book is the way in which liberal education has altered and enriched the trajectory of my life.”

Montás’s mother had emigrated two years earlier, endured the low-wage jobs, daily hardships and culture shocks that typify the lives of industrious and determined immigrants, and paved the way (barely) for her two sons to join her. His father’s priorities did not include moving or supporting his ex-patriated family, whose other members all worked and saved. “I cannot take lightly the opportunity Mom created for me,” Montás declares. “I doubt there is any place on earth my mother could have taken me where I could construct a life as rich and broad as I have here, in the United States.”

As for the early culture shocks, Montás declares that the flight to New York “was only three and a half hours long, but the distance I traveled . . . was in many ways incalculable.” Consider the changes: from rural village to mega-city, from a monolingual, monocultural community to polyglot urbanity dominated officially by English, from a world where advanced formal education was not part of the daily picture of life. 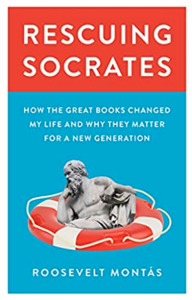 While Montás’s formal educational trajectory in New York began in the bilingual classrooms of Queens, his informal education had already begun under his father, a self-styled Marxist who made a point of speaking out against Dominican strong men, corrupt officials, and Yankee imperialism. While his father worked irregularly at tailoring in the home, local men gathered to discuss “some political, historical or metaphysical question.” At night, the front porch became the site of a local “symposia,” referred to by locals as la escuelita, the little school. Once in New York, the Pentecostal community in which the author found himself deeply involved for a time, provided examples of people reading texts as if their souls depended upon proper interpretation.

Most importantly, a teenaged Montás rescued a volume of Plato from a sidewalk garbage heap—a Harvard Classic whose beauty as a physical object is also noted—and read it with the openness and curiosity that consistently shine through in the author. “There I stood before a trove of precious books.  . . . In ways I could not have understood, before me was the treasure I had come to America to find.”

Fortune favors the ready and receptive, and Montás not only salvaged a life-changing book but met an inspiring high school history teacher. “Teacher-fire” was immediately evident in Mr. Philippedes, who guided the author’s reading, engaged him in intellectual conversations and eventually spurred him to apply to Columbia. Surely Mr. Philippedes must have sensed an equivalent student-fire in the word-hungry boy whom he presented with a copy of The Iliad as a Christmas present. Philippedes was “doing his best to prepare” his tutee for what was to come. “Trying to make sense of this monster of a text is an intellectual initiation that all Columbia students undergo, a kind of rite of passage.”

The culture shocks continued upon enrollment at Columbia, which tried to prepare students with “marginalized identities” during a summer “bridge” course that the author credits with helping him get ready for the speed and depth of university class work. Even so, Montás imagines that if he had had a cell phone available, he would have called his brother to come take him back home during the first days at the university. “Belonging is a funny thing,” he writes. “People don’t feel like they belong because they are told they belong… Explicit institutional gestures at inclusion almost always backfire. Yet gestures must be made.”

Resistance to and outright rejection of so-called Dead White Male authors, especially in the guise of required course work, has been a force in higher education for some forty years. Yet “all Columbia students” are still required to take two semesters of Literature Humanities, the course sequence that changed Montás’s life and that he champions as author, teacher, and administrator (he served ten years as the director of Columbia’s Center for the Core Curriculum).

Montás rejects the essentialism and ever more literal minded versions of relevance dominating the current resistance to classical texts. “As a young person trying to understand what it meant to be who I was and to be where I was, I found in Plato a genuine affirmation of my identity,” he writes. The positive value he finds in the texts of Augustine, Plato, Freud, Gandhi and others is there for all to find. Those who wish to impose a color bar or an identity politics litmus test on such authors are answered respectfully but firmly by Montás. He writes that even as a student, he “quickly came to resent expectations about who I was supposed to be, what I was supposed to like, what political views I was supposed to hold, what student groups I was supposed to join, what classes and topics I was supposed to be interested in, what identity I was supposed to need affirmed.”

Obviously, the book arrives at a red hot period of the culture wars. But the liberal arts have long been “a hard sell.” Even those who do not see white supremacy root and branch in traditional curricula are not apt to support the sort of requirements found at Columbia—or anything half so rigorous.

The reasons for this are many. Parents, students, faculty, and administrators have all become more instrumental, transactional, and narrowly vocational in thinking. Universities borrow more and more from the vocabulary and ethos of corporations and less and less from the language of pedagogical leadership. Social justice advocacy rides high in the saddle, while the wisdom of the past trails behind in the dust.

Some faculty actually do oppose the premises behind any sort of general education requirements on either pedagogical or political grounds. Others may agree in theory with a general-ed core curriculum but contemplate with trepidation the expenditure of time and energy involved in the interminable wrangling that would be involved in curricular decisions and implementation. Many faculty recognize that teaching general education will not benefit their careers since promotion and tenure rely so heavily upon research and publication in a specialized field.

But so compelling are Montás’s arguments on behalf of the traditional liberal arts core that ignoring the classics comes to seem a form of cheating oneself, and colleges which make no requirements along these lines might be accused of cheating their students. “People fortunate enough to have had [a liberal arts education] often describe it as a life-altering experience,” Montás states, but those who have not had it may well not imagine what they have missed. It is up to faculty and the administration to make the case rather than dodge the responsibility.

Montás makes the case best by recounting the particulars of his own engagement with great authors, including the four figures mentioned above—Augustine, Plato, Freud, and Gandhi—each of whom governs a chapter. His analyses are interesting and subtle and always return to considerations of how their work made the author a more fully conscious person and a more ready citizen. Freud would not be on any list of writers that I would recommend to students, yet I take to heart the author’s claim that Freud enabled him to understand deep matters, and in thus winning my reluctant sympathy Montás reveals the ineffable nature of the value of great texts, which depends upon the meeting of minds.

Here is the very model of intellectual dialogue: Freud speaking to Montás and Montás considering thoughtfully and speaking back—a demonstration of the fact that the value of liberal arts education is to be found in the experience itself rather than in bean-counter terms such as “learning outcomes” or starting salaries.

Matthew Stewart is Associate Professor of Humanities and Rhetoric at Boston University. Originally published by  The James G. Martin Center for Academic Renewal. Republished with permission.