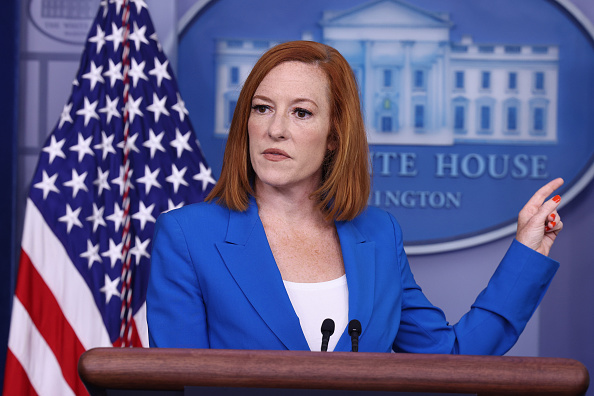 Alabama and other states that ban performing gender reassignment procedures on children will face consequences, says the Biden administration.

Alabama passed a law making it a felony to use puberty blockers, hormone treatments, and surgery on children.

“President Biden has committed in both words and actions to fight for all Americans and will not hesitate to hold these states accountable,” said White House Press Secretary Jen Psaki, in her daily press briefing, on April 8. “Alabama’s lawmakers and other legislators who are contemplating these discriminatory bills have been put on notice by the Department of Justice and the Department of Health and Human Services that laws and policies preventing care that health care professionals recommend for transgender minors may violate the Constitution and federal law.”

In addition, federal health agencies have released a series of documents detailing the specific gender surgeries and hormonal treatments for minors the Biden administration supports.

Leftist activist groups, including the American Civil Liberties Union (ACLU), GLAAD, and The Trevor Project, condemned the Alabama bill for denying “gender-affirming care.” The ACLU said in a tweet it will sue the state.

Arizona and Texas have passed laws cracking down on such procedures and more than a dozen other states are considering similar laws.

“That every major medical association ‘agrees’ with something does not make it correct,” said Orient. “‘Major’ likely means it makes significant contributions to politicians.”

“Rank-and-file members have little influence on what the official position might be,” said Orient. “Members are never even polled as far as I know.

“The organizations have big budgets, and they get funding from entities with a profit [motive] or ideological agenda: research funding is a government monopoly and the professional-managerial class has mostly been captured by progressives,” said Orient.

The American Medical Association (AMA) strengthened its opposition to “governmental intrusion” into gender-affirming care in 2021, arguing that denying such care to children can have “tragic consequences.”

“The AMA favors government intrusion into many forms of medical care, such as forbidding therapy directed toward reducing unwanted same-sex attraction; blocking progesterone treatment intended to reverse a chemical abortion; or many forms of stem-cell or cancer therapy,” said Orient.

“I think AAPS members would agree that gender-confused children need compassionate appropriate care, but most would disagree with puberty blockers, cross-sex hormones, or mutilating surgery in minors, on the general principle that informed consent is impossible,” said Orient.

The surgeries can involve removing breasts and mutilating genitals, and puberty-blocking drugs can leave patients sterile and cause other irreversible damage. The research shows such interventions are inappropriate and harmful to children, says a position statement titled “Gender Dysphoria in Children,” published by the American College of Pediatricians, in 2018.

“The USMA stands firmly against genital mutilation and delusion-reinforcing interventions performed on innocent children who are not yet sufficiently mature to make a sound decision on their mental health,” said Gonzales. “Despite Ms. Psaki’s ransacking of the available scientific knowledge, physicians are well aware that all mammals, including homo sapiens, are either male or female.”

Gender-reassignment procedures are inappropriate for most patients, says Gonzales.

“With rare exceptions relating to bona fide chromosomal and receptor abnormalities or in cases of exceedingly rare mental health disorders, any attempt at morphing basic scientific precepts to accommodate a deranged political agenda that uses children as its victims is nothing less than the worst form of child abuse and should be shunned by physicians, policymakers, and the lay public alike,” said Gonzales.

‘Children Are Not Political Pawns’

President Biden supports the radical transgender agenda and is willing to sacrifice the well-being of children to achieve political goals, says Gonzales.

“He is meddling with a very complicated issue having significant life-long deleterious ramifications on innocent patients for decades to come,” said Gonzalez. “Our children are not political pawns to be recklessly deployed without concern for their physical or mental wellbeing. President Biden may fight for deranged leftist policies, but he has repeatedly demonstrated that he is unwilling to fight for the very children he is spuriously claiming to defend. He will only fight against gender dysphoric children and the parents who are trying to raise them.”

This article was updated on April 29.