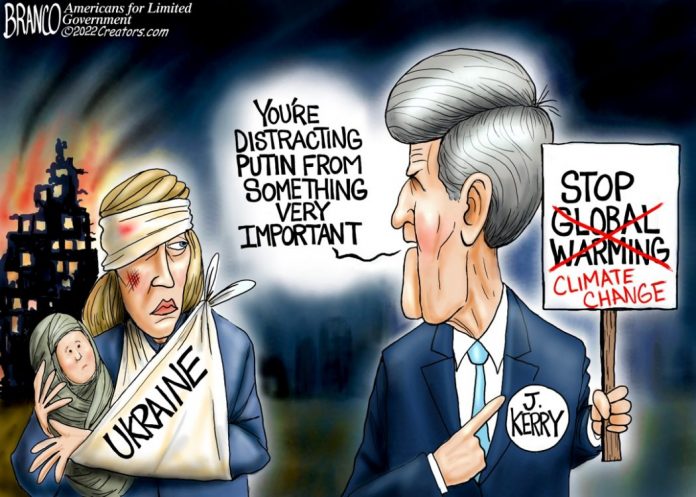 Remarks by the President Joe Biden’s “Climate Czar” John Kerry on the eve of Russia’s invasion of Ukraine casts a revealing light on the mindset and priorities of those entrusted with guiding America’s response to the outbreak of war in Europe.

In a February 21 interview with BBC Arabic, Kerry expressed his concern that a war in Ukraine could divert attention and resources from what he sees as a larger threat: a warming climate.

“I’m concerned about Ukraine because of the people of Ukraine and because of the principles at risk, in terms of international law and trying to change boundaries of international law by force,” Kerry, the U.S. special envoy on climate, explained. “But massive emissions consequences to the war – but equally importantly, you’re going to lose people’s focus, you’re going to lose certainly big country attention because they will be diverted and I think it could have a damaging impact.

“So, you know, I hope President Putin would realize that in the northern part of his country they used to live on 66 percent of the nation that was over frozen land,” Kerry continued. “Now it’s thawing and his infrastructure is at risk, and the people of Russia are at risk, so I hope that President Putin will help us stay on track with respect to what we need to do for the climate.”

One day before his BBC interview, Kerry told GZERO Media’s Ian Bremmer that a Russian invasion of Ukraine will have a “monumental impact on ability and willingness of people to do what’s necessary” to curb emissions, and it will be “very tough for the climate agenda, there’s no question about that.”

Kerry’s hope that Putin would prioritize the climate over geopolitical considerations was dashed when Russian troops invaded Ukraine four days after the BBC interview.

The invasion has roiled energy markets around the globe, prompting several European nations to pledge to reduce or end their dependence on Russia for oil and natural gas by the end of the year. Underscoring the changed mood in Europe, the United Kingdom, endowed with potentially rich shale formations, is actively reconsidering its stance on fracking. In addition, Germany is reversing course, speeding up the approval process and construction of two liquefied natural gas import terminals on its North Sea Coast and approving a greater use of coal.

Both countries have invested heavily in wind and solar power, which has proven expensive to consumers while failing to produce the baseline energy both countries need.

In the United States, the Biden administration’s energy policies had already resulted in rising gasoline prices months before the invasion.

Scrambling to quell consumer anger over rising prices at the pump, on March 31, the White House it would release 180 million barrels of oil from the national Strategic Petroleum Reserve in the next six months.

This would be the biggest release in the history of the reserve and leave it at its lowest level since 1984. Based on the effect of past releases from the SPR onto oil markets, Biden’s move is likely to have at best a minimal, temporary effect on the price retail price gasoline at the retail level.

Other than tapping the Strategic Petroleum Reserve, the administration is staying the course on fossil fuels, including blaming the oil companies and Putin for rising gas prices.

In his proposed $5.8 trillion budget for the 2023 fiscal year, Biden is seeking $50 billion in climate programs, including $18 billion to improve the U.S. government’s resilience to climate change, $3.3 billion in funding for clean energy projects, and at least $20 million for a new “Civilian Climate Corps.

‘Error of Their Ways’

Biden refuses to get serious about America’s and the world’s energy needs even with a war raging, says Jay lehr, Ph.D., a senior fellow with the International Climate Science Coalition,.

“We have long reached the point where John Kerry’s comments can no longer be taken seriously,” said Lehr. “Instead of acknowledging the errors of their ways, which some European countries to their credit are doing, the Biden administration is continuing its own war against affordable and reliable energy for the American public.”

The tragedy that befalling the people of Ukraine will have reverberations that will last for many years, yet the world and the United States seem to be missing a golden opportunity to reconsider their anti-fossil fuel policy positions, says Craig Rucker, president of the Committee for a Constructive Tomorrow (CFACT), which co-publishes Environment & Climate News.

“Putin’s invasion also provided an opportunity for the U.S. to step in with its abundant natural gas and come to the aid of Europeans eager to be done with energy dependence on Russia,” said Rucker. “Alas, based on it policy proposals, the Biden administration seems intent to provide little or no such relief.

“And in the true spirit of John Kerry, the United Nations Panel on Climate Change, completely oblivious to Europe’s energy crisis, has just called for a ‘substantial reduction’ in the global use of fossil fuels in order to avoid the worst impacts of climate change,” said Rucker.

Bonner R. Cohen, Ph.D., (bcohen@nationalcenter.org) is a senior fellow at the National Center for Public Policy Research and a senior policy analyst with CFACT.