Commentary: Rescuing “Virtue and Talents” Amidst the War on Tests

On March 28, 2022, Stuart Schmill, Dean of Admissions and Student Financial Services at the Massachusetts Institute of Technology (MIT) announced the school’s plan to restore the consideration of standardized tests to its undergraduate admissions process. A heavyweight bucks against the self-destructive path of attacking merit and standards. Will more follow suit? Or, is MIT’s rebellion too little and too late?

In his 1813 letter to John Adams, Thomas Jefferson laid out his vision for American meritocracy— “a natural aristocracy among men,” grounds of which “are virtue and talents.” This republic of merit separated the newly independent nation from the old world where artificial aristocracies “founded on wealth and birth” hindered the common good. Jefferson stipulated what it meant to have a merit-based education system that diffuses learning democratically and efficiently:
“to establish in each ward a free school for reading, writing and common arithmetic; to provide for the annual selection of the best subjects from these schools who might receive at the public expense a higher degree of education at a district school; and from these district schools to select a certain number of the most promising subjects to be completed at an University, where all the useful sciences should be taught. Worth and genius would thus have been sought out from every condition of life, and completely prepared by education for defeating the competition of wealth and birth for public trusts.”

The Test-Free Movement in a Historical Context

Forces within, from slavery to school segregations under Jim Crow laws to race-based admissions, have tried to corrupt the grand proposal of equality and merit. Like previous illiberal bargains to categorize students by race, the central focus of test-free admissions is also preoccupied with immutable features of the individual, under the fashionable banner of social identities, rather than observable academic performance. But unlike historical race-based practices that were rooted in bigotry and racism, arbiters of “equitable” college admissions in the modern era claim they are waging battles against the evil spirits of white supremacy, systemic inequities, and structural racism.

The movement away from merit-based considerations started with the holistic evaluation model, in which academic, nonacademic, and environmental factors are compounded to build a full profile of the applicant. Harvard invented the model nearly a century ago to limit Jewish enrollment. But even with capturing unmeasurable factors for holistic evaluations, the racial composition of student bodies at selective U.S. colleges and universities was still not squarely reflective of America’s general demographics.

Many thus have turned to race-based affirmative action to artificially drum up the admission numbers of the so-called underrepresented minority students (URMs). Applicants with statistically significant academic gaps are lumped into the same freshman classes. Yet again, this soft experiment of race-conscious admissions fell short of achieving the goal of racial diversity. In spite of the broad-spectrum implementation of race-based affirmation action, the share of URMs at elite institutions has decreased since 1980.

Getting Rid of the Tests in the Name of Equity

Instead of scaling back because it’s not working, universities and colleges have then decided that they must do even more along the line of race consciousness. In summer 2018, the University of Chicago led the herd by dropping SAT and ACT from its undergraduate admissions to “level the playing field.” As of March 31, 2022, over 1,830 accredited institutions of higher education in the U.S. are test-optional, while 83 campuses are test-free. The newest participant in the test-blind craze is the California State University (CSU) system as its Board of Trustees recently voted unanimously to permanently remove standardized tests to “focus on equity.”

The existence of a racial academic achievement gap is frequently cited as the chief factor: the average SAT score by race is distributed as 1223 (Asian), 1114 (white), 978 (Hispanic), 933 (black), and 913 (American Indian/Alaska Native). Fair Test, the leading non-profit organization championing the test-free movement, claims that test-makers have built-in cultural biases and testing feeds the school-to-prison pipeline. The National Education Association, the country’s largest teachers’ union, argues that standardized tests “have been instruments of racism and a biased system.”

Failing to explain why Asian Americans have the highest test scores in spite of historical marginalization and inter-group diversities, the notion of inequity causing testing discrepancies defies logic. Equally ludicrous is the assertion that high-stakes testing naturally disadvantages students of color. To construct divergent testing scores as a symptom of racism is tantamount to arguing that other achievement gaps in K-12 are a direct result of racist institutions and practices. Once again, the highest-performing group by aggregated data on high school graduation and college preparedness is Asian-American students, 93 percent of whom graduated from high schools in 2019 (compared with 89 percent of white students, 82 percent of Hispanic students, 80 percent of black students) and 75 percent were college-ready (compared with 57 percent of white, 29 percent of Hispanic, and 20 percent of black students). These facts strongly invalidate the “racism” thesis.

MIT also emphasized “equity” in its recent decision to reinstate SAT and ACT: “We believe a requirement [for testing] is more equitable and transparent than a test-optional policy.” The competition to reclaim equity in its apolitical sense–a state of social organization that renders fairness on an individual basis—is supported by empirical evidence from the University of California’s Standardized Testing Task Force and countless anecdotal accounts of hard-working, first-generation, low-income students achieving their college dreams via the route of testing in. Ironically, the pro-testing advice from the UC Task Force was conveniently ignored by the UC Board of Regents, which finalized a decision to eschew ACT/SAT and other possible testing alternatives in late 2021.

Now MIT, in its counter-hegemonic, heterodox stance on merit and equity, stands in stark contrast to the majority of test-optional elite institutions, including most Ivy League colleges.

The assault on merit and standards is not a victimless act. Meet Victim #1 – assiduous students of Asian descent whose only “crime” is their race. Under the previous regime of holistic admissions, statistical evidence from high-profile cases including SFFA v. Harvard and eyewitness accounts from former admissions officers demonstrate systemic higher standards and racial stereotypes levied against Asian-American applicants.

Efforts to eliminate standardized tests exacerbate the problem: my preliminary data analysis below on 12 high schools in Bay Area, California shows that majority-Asian schools have suffered steep declines in student admissions by UC Berkley in the last three test-free admissions cycles. In Berkley’s traditional feeder school—Lynbrook High where Asian students take up an 85 percent majority— for instance, the admission rate by Berkley dropped from 29.8 percent in 2019 to 8.84 percent in 2020 and 5.98 percent in 2021. And the racial balancing acts took place regardless of discrepancies in math and reading among these high schools. 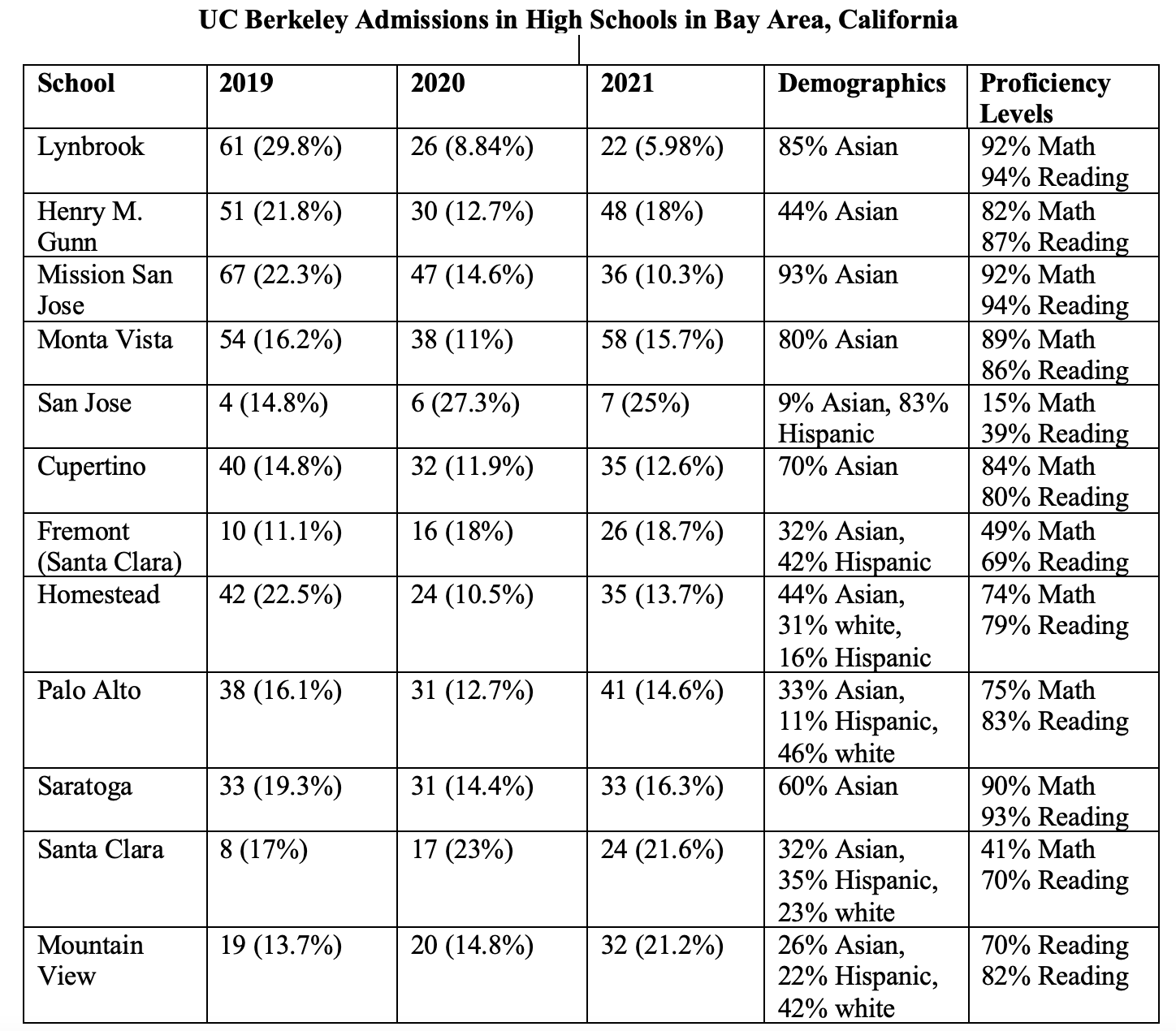 While the so-called underrepresented students are generally hurt by academic mismatch and the soft bigotry of low expectations, the system itself occasionally backfires. A detailed investigation by the New Yorker of a story in which a student is penalized by the University of Pennsylvania for “inaccurately” reporting her “first-generation,” “low-income” statuses exposes the inherent flaws of an identity-based approach to selecting and rewarding talents. A bigger victim exists at the institutional level, where declining national academic performance would deteriorate further in an everything-goes, standard-free system.

According to ratings by the Program for International Student Assessment (PISA), the U.S. ranked #25 on 15-year-old students’ academic performance in math, science, and reading among nearly 80 countries and #37 on its average math score in 2018. The American Association for the Advancement of Science reported that just 16 percent of its members considered the quality of American K-12 STEM education to be above average. Getting a bigger share in a shrinking pie is a fool’s errand. MIT, America’s top college for science and technology education, understands that.

The fundamental issue in the test-blind paradigm shift is this assumption that higher education institutions can become effective agents for change to cure complicated policy and cultural problems rooted in K-12 and the bigger society. In other words, advocates of test-blindness possess such wishful thinking that lowering or eliminating standards can somehow miraculously improve the reading, writing, mathematics, and STEM proficiencies of under-performing students.

When I took a 5-hour train to Chongqing to take an admissions test required by most American graduate schools I planned to apply to, after a magnitude 7.9 earthquake had nearly destroyed my college town, the last thing on my mind was to look for and get offended by questions that did not honor my culture. I scored 112 out of 120, without private tutoring and with only hand-me-down test practice books. My insignificant story is one in the ocean of millions who strive to overcome their human limitations and work hard to get ahead in a system that sees their self-worth defined as “virtue and talents,” rather than “wealth (or lack thereof) and birth.” Perhaps the solution to our current quagmire has been hidden in plain sight the whole time—embrace standards and return to merit-based admissions. MIT gets it and more should follow.

Wenyuan Wu holds a Ph.D. in International Studies from the University of Miami and is the Executive Director of Californians for Equal Rights Foundation. She previously served in the same capacity for the historic No on 16 Campaign. Dr. Wu has been interviewed by the Wall Street Journal, Fox News, National Review, NBC News, ABC News, NPR, Quartz, Ed Source, College Fix, and others. She writes for Minding the Campus of the National Association of Scholars and sits on the board of Parents Defending Education Action. Since late 2020, Wenyuan has focused her advocacy and research work on combatting the intrusion of critical race theory (CRT) in American public life. Originally published by The James G. Martin Center for Academic Renewal. Republished with permission.

Wenyuan Wu
Wenyuan Wu holds a Ph.D. in International Studies from the University of Miami and is the Executive Director of Californians for Equal Rights Foundation.