Economic reports indicate weakness in productivity, making it very difficult for the Fed to contain inflation without bringing on a recession.

The U.S. economy has suffered a series of hits, mostly self-inflicted. Large increases in federal spending combined with substantial new regulatory burdens have produced a significant weakness in productivity.

Some economists claim economic policies do not affect productivity. They are wrong. The following chart shows productivity trends since 1995.

A weakness in productivity makes it very difficult for the Fed to contain inflation without bringing on a recession. Although it might still be possible to avoid a downturn, the number of missteps by the Fed suggests the odds of a recession are now very high. Although the timing and magnitude of a downturn remain speculative, it’s likely the economic weakness will become more apparent later this year.

Fed policy can go a long way to determine the timing and magnitude of any downturn. Hence, tracking monetary policy developments in the months ahead will be particularly telling.

One problem associated with today’s monetary policy is that when the Fed uses its power to dictate interest rates, it distorts credit markets. The Fed’s recent increase in the fed funds rate did not involve any sales of securities. Instead, the Fed dictated a new interest rate target instead of selling securities and letting the market achieve the target rate.

This will happen again in mid-June. The Fed will choose a new, completely arbitrary interest rate target and use its power to force the economy to adjust to it. The Fed also intends to sell about $45 billion a month in securities.

What will happen to the money supply? No one knows. The following chart shows banks in April shifted roughly $250 billion in deposits from the Fed into the economy. 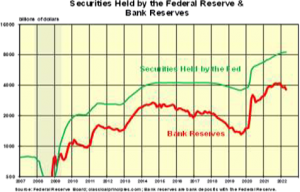 When banks shift their funds from deposits with the Fed into loans and investments, there is an increase in money. Without knowing what banks will do with their deposits at the Fed, there is no way to know how Fed policies will affect the money supply.

The next chart shows the net effect of these two main components, which are labeled liquidity. This liquidity measure increased by double- digit rates in 2020 and 2021. What followed was the double-digit increase in spending, widespread shortages, and the highest increase in inflation in 40 years. As the chart shows, there has been no liquidity restraint through April.

The shape of the yield curve (see charts on the following page) shows a large spread between the fed funds rate and the two-year Treasury Note. The increased spread indicates financial markets are expecting substantial increases in the fed funds rate will be necessary to contain inflation.

Monetary indicators through April continue to point to an expansive policy. Given the lags between policy changes and changes in spending, the current policy should continue to drive demand at a rapid rate through to the end of this year. If so, inflation will remain high. 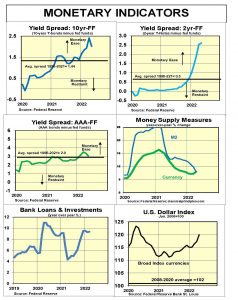 Sensitive short-term indicators are mixed. Two of the most reliable sensitive indicators—stocks and housing—are pointing to significant weakness ahead.

Higher mortgage rates and soaring home prices led to a sharp decline in home sales in April. New home sales are down 40 percent from their peak two years ago. Inventories of new homes are at nine months, up from a low of three months two years ago. The May housing outlook was no better, as the Homebuilders’ survey declined by eight points, to 69.

The Markit survey for May found only a slightly slower pace of activity. The overall index was 53.8, down one point from its longer-term average. The survey is consistent with a real growth rate of 2 percent.

Despite the slower pace, demand and new orders were described as strong and business sentiment was more optimistic than in April. Inflation continues to soar.

Coincident indicators show the economy continues to expand. April vehicle sales continued a slight upward trend. Businesses in early May report supply-side pressures are easing. The Fed’s April index of manufacturing output is up at an 11 percent annual rate from its first quarter average. Employment is strong, but inflation continues to limit any real wage increases. 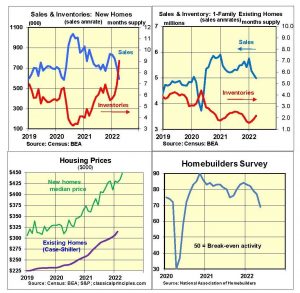 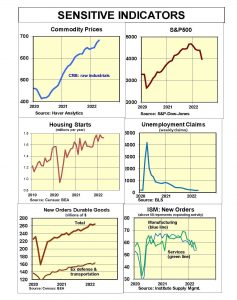 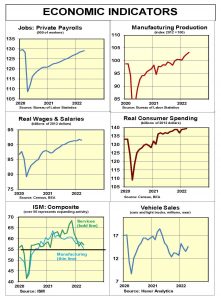 Continued strong demand led to a sharp upturn in inflation in the first five months of the year. Underlying or fundamental inflation is the difference between the demand for goods and services and the supply.

We estimate the fundamental inflation rate by taking current dollar spending (GDP) over two to three years and subtracting real growth. Due to the Covid downturn and the subsequent explosive rise in spending over the past eighteen months, the normal lags between spending and inflation were reduced.

Our measure of fundamental inflation collapsed amid the lockdown and has since soared. Inflation responded much sooner to both the slowdown in demand from the lockdown and the subsequent rebound.

If the spending pace through to the end of this year continues in the vicinity of a 9 percent annual rate, the two-to-three-year spending pace will be 10 percent. 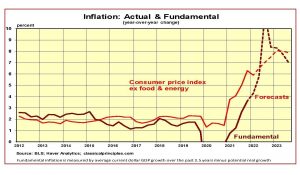 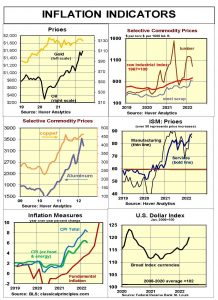 At the Fed’s mid-June meeting, it is expected to increase the fed funds target to 1¼ percent to 1½ percent. The increase is designed to convince investors the Fed is serious about containing inflation.

The Fed’s statements indicate an intention to do whatever it takes to get inflation down. This raises the potential the Fed will overdue the restraint, much as it overdid the stimulus. Although the odds of a recession have increased, there is still a chance to avoid it.

The key to containing inflation is the growth in current dollar spending (GDP). If our forecast of a strong pace in spending continues, the Fed will be increasing interest rates and selling securities well into the end of the year. However, restraint applied to an economy with weak productivity will make a recession almost inevitable.

There still is an outside chance of avoiding a downturn. If the Fed’s tough talk were to slow spending faster than expected, it could limit the need for substantial monetary restraint. This is our hope, not our forecast. 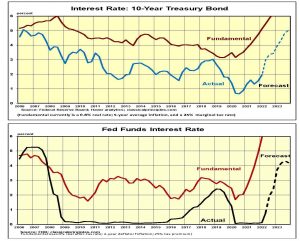 First quarter S&P500 companies’ reported earnings were down 16 percent from the fourth quarter. Even so, earnings are still almost 20 percent above their longer-term trend. Given the pressures from increased costs and higher interest rates, earnings are likely to continue to decline in the quarters ahead.

Our estimate of the fundamental value of the S&P500 is currently 3,300. Despite a 20 percent decline, the S&P500 remains close to 20 percent overvalued.

Although all projections of the stock market are highly speculative, our most likely scenario points to further weakness in stocks. With the mistakes the Fed has made so far in underestimating inflation, the potential for future policy mistakes remains high. Investors should remain cautious in facing what is likely to remain a difficult financial environment in the year ahead. 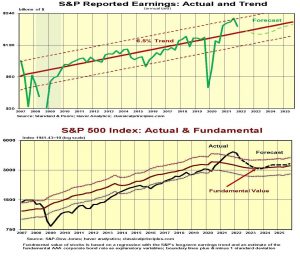 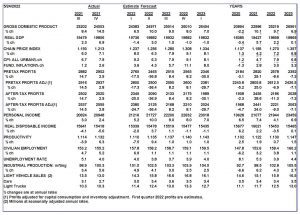 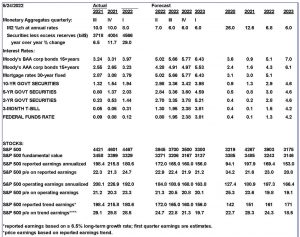