One of the nation’s biggest insurance companies seems embarassed about revelations it has been pushing LGBTQ books to schoolkids.

In January, State Farm Insurance actively advocated a company-wide program to get “Transgender, Inclusive and Non-Binary” books into school libraries to spark “challenging, important and empowering conversations with children ages 5 and up. The company’s LGBTQ advocacy shifted dramatically on Monday, however: “Conversations about gender and identity should happen at home with parents, State Farm said in a statement after they were exposed by the independent non-profit organization Consumers’ Research.

On January 18, 2022, State Farm’s Corporate Responsibility Analyst Jose Soto sent out an internal email calling on its Florida agents to participate in a “unique project” to “diversify” classrooms, community centers and libraries.

In the email, Soto said State Farm had partnered with the GenderCool Project to get books about being transgender and non-binary in front of schoolkids as young as 5-years-old. 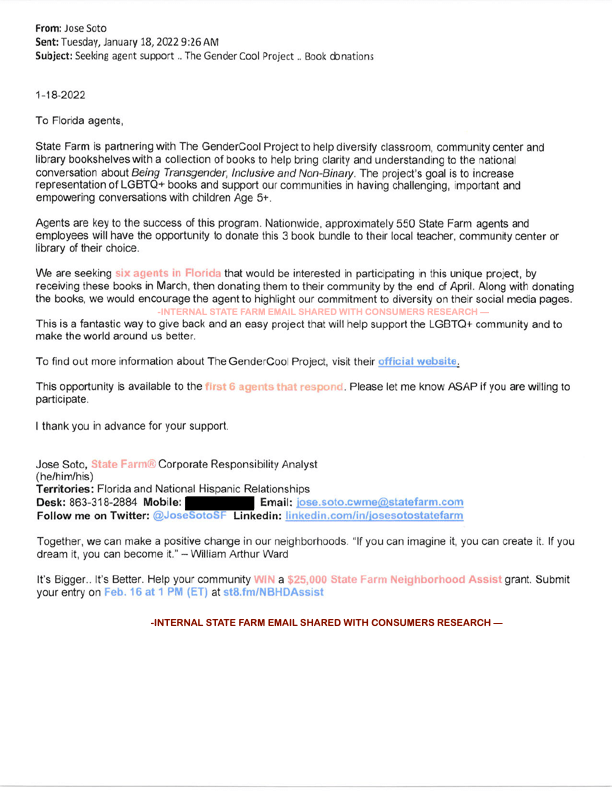 “State Farm is partnering with The GenderCool Project to help diversify classroom, community center and library bookshelves with a collection of books to help bring clarity and understanding to the national conversation about Being Transgender, Inclusive and Non-Binary,” the email reads. “The project’s goal is to increase representation of LGBTQ+ books and support our communities in having challenging, important and empowering conversations with children Age 5+.”

In a series of Tweets, Monday, Will Hild, the executive director for Consumers’ Research, blasted State Farm over its aggressive LGBTQ advocacy.

“This gross and blatant attempt to indoctrinate our children by State Farm is shameless, and consumers should be aware a company founded on family values is now encouraging five-year-old children to question their gender” said Hild.

“Why would an insurance agency like State Farm, a company founded on family values that touts being a good neighbor when you need it, try to encourage five-year-old children to question their gender?” Hild asked. “If companies are going to put woke politics above their consumer, consider them warned. Telling Americans how to behave and using kindergartners as pawns in a political game is disgusting.”

A spokesperson for State Farm on Monday claimed that the program was short-lived, and participation was “strictly voluntary.”

“Our participation in this program evolved quickly, and the decision was made several months ago for participants not to share resources with schools,” a State Farms spokesperson told the Daily Caller.

However, a Facebook post in April from a school in Tacoma, Washington, conflicts with State Farm’s claim that a decision was made “months ago” to cancel the program, the Caller noted. In the post, the Seabury School thanked the GenderCool Project and its partnership with State Farm for delivering the LGBTQ books.

In a separate statement to the Caller on Monday, State Farm said: “Conversations about gender and identity should happen at home with parents. We don’t support required curriculum in schools on this topic. We support organizations providing resources for parents to have these conversations, the statement read in part.”

“We no longer support the program allowing for distribution of books in schools. We will continue to explore how we can support organizations that provide tools and resources that align with our commitment to diversity and inclusion, the statement continued.”

State Farm sent out a mass email to employees with the same basic message, Libs of Tik Tok reported on Twitter.

According to a source, “agents were really upset” about the program when they found out.

Debra Heine
Debra Heine is a conservative Catholic mom of six and longtime political pundit. She has written for several conservative news websites over the years, including Breitbart and PJ Media.