Justice Thomas, Sen. Cruz Push Back Against Leak of Draft Opinion, Protesting Outside of Justices’ Homes 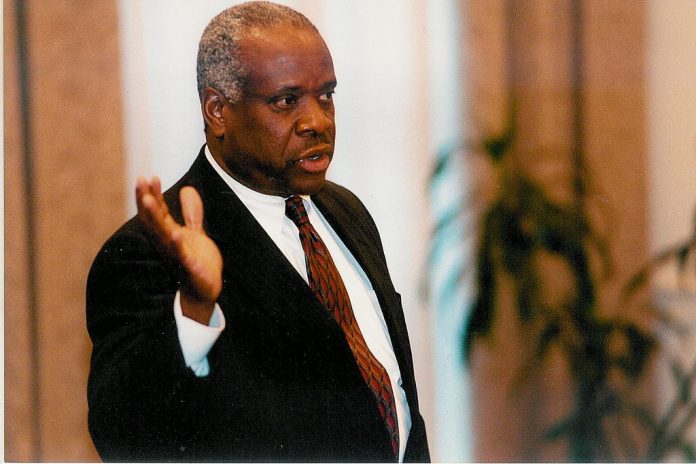 (The Center Square) – Supreme Court Justice Clarence Thomas and U.S. Sen. Ted Cruz are pushing back against abortion activists’ tactics after a Supreme Court draft opinion calling to overturn Roe v. Wade was leaked by someone in the court.

Thomas says the court won’t be bullied by those who don’t like its opinion, and Cruz, a former Supreme Court clerk, says the president not condemning activists targeting justices homes “is literally threatening the lives of these justices.”

After Chief Justice John Roberts said an investigation was underway to identify the source of the leak, protestors assembled outside of his and other justices’ homes this weekend with more planned “walk bys” for the coming weeks. If such protests and other acts are done to intimidate the justices, legal scholar James Hirsen said they violate federal law, obstruct justice and, if prosecuted, carry a penalty of one year in jail.

Roberts said the leak wouldn’t undermine the integrity of the court’s operations or change the draft opinion.

Thomas reiterated and expanded on that sentiment at an Eleventh Circuit judicial conference on Friday. He said, as a society “we are becoming addicted to wanting particular outcomes, not living with the outcomes we don’t like,” according to Reuters. “We can’t be an institution that can be bullied into giving you just the outcomes you want. The events from earlier this week are a symptom of that.”

Abortion activists published the home addresses of the justices who voted to overturn Roe, calling for protests and “walk bys,” which began this past weekend. When asked if the president supported such acts, Press Secretary Jen Psaki said at her last press briefing on Friday, “The reason people are protesting is because women across the country are worried about their fundamental rights.”

When pressed, she refused to condemn acts of violence, intimidation or the publishing of the justices’ addresses.

In response, Cruz, , R-Texas, said, “The Biden White House is openly urging rioters to target the Justices’ homes and threaten their families. Radical Democrats want to ‘burn it all down,’ and they are happy to employ violence against anyone who doesn’t comply.”

He told Fox News’ Larry Kudlow that the White House’s response “was another example of the Democratic Party being radicalized and taken over by the extreme revolutionary socialist Left. And they’re willing to destroy institutions.”

By not condemning “violent protestors threatening the families of the Supreme Court,” Cruz told Fox News’ Maria Bartiro, “Joe Biden is literally threatening the lives of these justices.”

If the draft opinion was leaked and the protests were orchestrated to change the outcome of the court’s decision, that’s illegal, Law scholar James Hirsen said.

“The fact of the matter is interference with the administration of justice in the manner in which it has recently been occurring is illegal,” Hirsen wrote on his website.

“Federal statute 18 U.S.C. 1507 states that whoever has the intent of ‘interfering with, obstructing, or impeding the administration of justice,’ or ‘influencing any judge, juror, witness, or court officer’ and ‘pickets or parades … in or near a building or residence occupied or used by such judge, juror, witness, or court officer,’ may be fined and/or may receive a prison sentence of up to one year.”