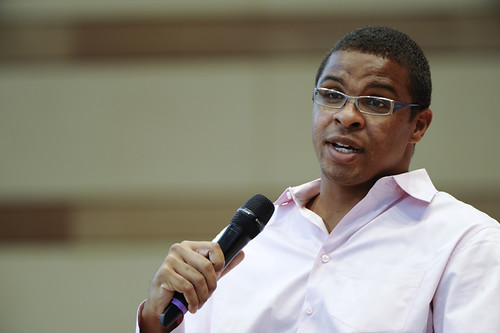 The suspension of Roland Fryer coincided with his research demonstrating a lack of racial bias in police shootings.

In the summer of 2020, after the sensationalized killing of George Floyd burned the words “Black Lives Matter” onto America’s streets and television screens, American institutions of higher learning turned to their offices of Diversity, Equity, and Inclusion to pledge loyalty to the African American community with cookie-cutter press releases and affirmations. Harvard University, known as the beacon of American higher education, led the way.

“Our community stands united in doing everything we can … to be agents of anti-racist social transformation,” wrote the dean of Harvard’s School of Public Health. The dean of Harvard College echoed that sentiment: “We stand with our Black alumni(ae), our Black faculty, our Black staff, our Black students, and other[s] … we unequivocally state our belief that Black Lives Matter.”

But when it came to supporting one key black voice – somebody with something to teach the American public, and whose background and credentials could not be questioned – Harvard’s actions didn’t match its rhetoric.

Just as the Black Lives Matter movement was gaining national prominence, a witch hunt-style cancellation of Harvard’s most prominent and promising black professor was taking place. Harvard’s suppression of Professor Roland Fryer, newly exposed in a 2022 film by documentarian Rob Montz and a score of articles from prominent thinkers such as Glenn Loury and Stuart Taylor (who wrote about this issue at RealClearEducation and appears in Montz’s documentary), is an egregious example of hypocrisy at work.

Montz’s documentary was screened this month at the Old Parkland Conference in Dallas, where scores of black academics, including Fryer himself, gathered to discuss social mobility, race in America, and other pressing issues.

The story must be seen to be believed, because Fryer is exactly the type of academic whom elite institutions claim to champion. Abandoned by his mother shortly after birth and raised by his alcoholic father, his arrival and accomplishments at Harvard are an incredible success story.

Fryer built a storied career using quantitative social science and common sense to investigate societal shibboleths such as the social effect of “acting white” among black students (it’s real) and the impact of racial bias in police shootings (you might be surprised – as Fryer himself was). His work on America’s most hot-button issues earned him headlines, and accolades: a MacArthur Genius Fellowship, honoree status from Time magazine, and the Clark Medal, making him the first African American to win it.

By the late 2010s, Fryer was an academic star, a generational voice at Harvard who pushed the boundaries of academic research to the benefit of the least advantaged Americans, and one who represented the true manifestation of the American dream. It was a long way from the housing projects of Daytona Beach, Florida. But his research upset the political apple cart – and Harvard would soon find occasion to muzzle him.

University administrators, including Dean of Harvard’s Faculty Arts and Sciences Claudine Gay and Dean of Social Sciences Larry Bobo, were less than enchanted with Fryer’s findings and regularly attacked his work. Gay and Bobo were among his foremost critics when Fryer’s lab found no evidence of racial bias in police shootings, concluding that, statistically, police officers were less likely to shoot black suspects than white ones.

In 2018, a former research assistant came forward with accusations of sexual harassment against Fryer. Most of her claims were dismissed by a neutral investigating committee, which recommended training for Fryer. But a small committee, including Deans Gay and Bobo, instead took the step of removing Fryer from the classroom for two years and shutting down his research lab. Dean Gay even lobbied Harvard’s president to revoke Fryer’s tenure – something that hadn’t been done at Harvard since the Civil War.

Another former research assistant, Tanaya Devi, calls the sidelining of Fryer “the most cold-blooded murder I’ve ever seen.”

I asked Harvard if there was any other example in the university’s history of a tenured professor being removed from the classroom and having his research shut down. The university refused to comment. Harvard also refused repeated requests for comment as to whether the university supports diversity of thought.

Fryer’s case is a cautionary tale at the Ivies. Just last week, Princeton University took the extraordinary step of firing an eminent tenured classics professor, Joshua Katz, after a similar witch hunt led by campus bureaucrats. Princeton’s pretext is similar to Harvard’s, related to a years-old consensual relationship between Katz and a student. But it’s obvious to any neutral observer that the repeated inquiries and unusual punishments are due to the professor’s opinions on race politics, not their workplace behavior.

The Harvard Crimson reports that as of 2021, Fryer had served his two-year suspension and was back in the classroom – but his research and academic life are under the direct supervision of Dean Gay, who had made her opposition to Fryer’s work clear.

Such a hostile working environment calls to mind the company boss from Joseph Conrad’s “Heart of Darkness,” who was “obeyed, yet he inspired neither love nor fear, nor even respect. He inspired uneasiness. That was it!” The message from Harvard is that Fryer should feel unease in his current position, for any misstep could land him back in academic jail. The chill of this potential punishment must affect the research Fryer is now conducting – robbing his students, and the American public, of an opportunity to learn more about our most complex social problems.

Harvard is not alone in this campus censoriousness. But the institution is symbolic because it is America’s foremost center of learning and research. The university has suppressed its most prominent economist and now refuses to say whether it supports diversity of thought. Donors and alumni should take note.

Albert Eisenberg
Albert Eisenberg is a millennial political consultant based in Philadelphia and Charleston, SC. He has been featured on Fox News, RealClearPolitics, the Philadelphia Inquirer, and elsewhere. He is a MaverickPAC Future 40 awardee. Follow him on Twitter at @Albydelphia.