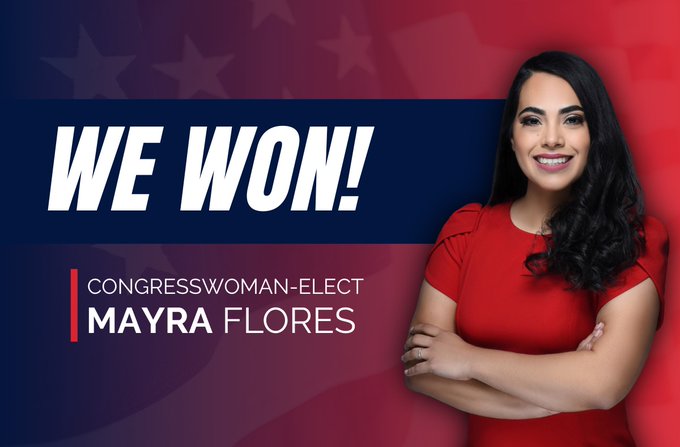 She’s the first Mexican-born woman and the first Republican to represent the Rio Grande Valley in Texas since Reconstruction.

“This historic win will bring back God to the halls of Congress,” Flores said after her win. “This win is for the people who were ignored for so long! This is a message that the establishment will no longer be tolerated! We have officially started the red wave!!”

Flores is one of four Latina Republican women hoping to flip south Texas red. Her race was seen as a bellweather for the region in which illegal immigration is impacting residents, who have increasingly voted Republican in the last two elections.

The special election decided who represents the district for the remainder of Vela’s term, which ends in January.

November’s regular election will determine who serves the new 34th district beginning in January for the next two years.

Flores, who outspent Sanchez by a ratio of 16 to 1, with money pouring in from Republican donors, is running again in November as the incumbent in the new district. She’s running against another incumbent, U.S. Rep. Vincente Gonzalez, who was first elected to the 15th Congressional District. Because of redistricting, he’s running for reelection in the 34th district.

Wife to a Border Patrol agent, her pro-life, pro-Second Amendment, and pro-law enforcement platform prioritizes border security and legal immigration. Gonzalez, who supports President Joe Biden’s agenda on a range of issues and is pro-choice, will face a tough race against Flores.

Sanchez conceded the race in a district that is 85% Hispanic.