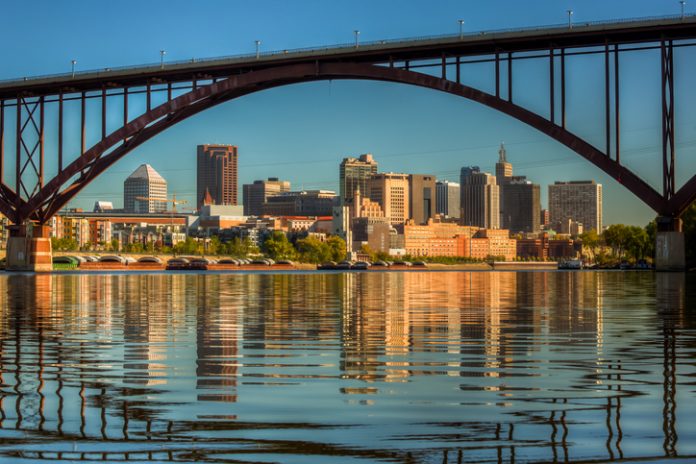 The preliminary results of St. Paul, Minnesota’s, strictest-in-the-nation rent control law have not been good. Developers have fled, while applications for new building permits and property values have both collapsed. Now, a pair of landlords are suing the city, claiming the law is unconstitutional.

Late last week, the owners of two St. Paul apartments—Woodstone Limited Partnership and Lofts at Farmers Market, LLC—filed a lawsuit in the U.S. District Court for the District of Minnesota claiming that the “draconian” nature of the law and the burdensome process for securing exemptions from it amount to a taking of their property without compensation or due process.

“The sudden depreciation in property values, coupled with the withdrawal from the market of many significant developments that would have included affordable housing, is predicted to significantly worsen, rather than alleviate, the affordable housing crisis plaguing St. Paul,” reads their complaint.

The ordinance, written by local activists and passed by voters in November 2021, capped rent increases in the city at 3 percent per year, with none of the typical allowances or exemptions for inflation, vacant units, and new construction.

The policy is far stricter than basically every other rent control law in the country. Oregon’s 2019 state rent control law, for instance, allows for property owners to raise rents by 7 percent plus inflation and exempts buildings less than 15 years old from these price caps.

While the St. Paul ordinance did allow landlords to obtain exemptions to that 3 percent cap if it threatens their ability to earn a “reasonable return” on their investment, what would count as a reasonable return and how to secure an exemption were left up to the city to hash out. St. Paul came out with proposed rules for implementing the ordinance, including the exemption process, in early April 2022. These were finalized later that month, and everything went into effect on May 1. The final rules allow landlords to “self-certify” exemptions if they’re trying to raise the rent by no more than 8 percent, which involves filling out a short form and submitting it to the city.

Landlords are also permitted to raise the rent up to 15 percent. Doing so requires vetting from city staff and the completion of a 22-page worksheet that asks the applicant to provide exhaustive detail about changes in their expenses that might justify a rent increase. Because all exemptions can be appealed and subjected to a city audit, even landlords who can self-certify increases of up to 8 percent are encouraged (but not required) to fill out that 22-page worksheet as well.

It’s a daunting prospect for many of St. Paul’s smaller landlords.

“I was so confused by the complexity of the documentation required that I was just completely overwhelmed by it,” Alexandra Straight, a physician who owns one rental property in the city, told Reason in April. “Someone like me, this isn’t my primary job, and the thought of having to document that and fill out all those forms and then wait for someone to respond just to nominally increase the rent, it’s overwhelming.”

It’s particularly troubling, she says, in an inflationary environment when everything related to operating a rental property is getting more expensive.

The plaintiffs in last week’s lawsuit allege that the exemption process is arbitrary, riddled with unnecessary delays, and forces landlords to publicly divulge confidential, competitive financial information. On top of that, they complain that the city doesn’t have the capacity to vet and approve rent increases. Their complaint notes that only one staffer dedicated to administering the rent control process has been hired, and they didn’t even start until this week.

All of this, they argue, amounts to a violation of landlords’ due process, as guaranteed by the U.S. and Minnesota constitutions.

Thus far, 25 applications for rent increases have been filed with the city—with most requiring only self-certification.

The landlords’ lawsuit claims that the dramatic fall in rental property values, estimated by one study recent to be $1.6 billion for the first quarter of 2022, amounts to an uncompensated regulatory taking. The same study found these property value declines were steepest in neighborhoods with higher-income renters, suggesting relatively well-off tenants are reaping the majority of the benefits of the law.

The lawsuit also argues that rent control is not a rational means of providing affordable housing, given the history of the policy in other cities, and the developer flight it has kicked off in St. Paul.

In the immediate wake of rent control passing, the local press was full of stories of developers walking away from in-progress projects totaling thousands of units. Building permit data culled by HUD, and highlighted by Twitter users, shows an 84 percent decline in building permit activity in the six months since St. Paul passed rent control compared to the same period a year prior.

Building activity in neighboring Minneapolis—which doesn’t have rent control but has eased zoning restrictions on new housing—has increased during the same period.

That all makes a compelling case that rent control is bad policy. Convincing a court it is unconstitutional is going to be more difficult.

“Constitutional challenges have really gone nowhere in the past century,” says Jim Burling, the vice president for legal affairs at the Pacific Legal Foundation, a public interest firm that has litigated or supported legal challenges to rent control.

“Courts have generally been reluctant to second guess the economic rulemaking imposed by state and local governments,” Burling tells Reason, which includes rent control.  Since then, the Supreme Court has shown little interest in revisiting the topic.

Challenges to rent control on due process and uncompensated takings grounds, the same issues raised in the St. Paul lawsuit, have had little success in lower-level federal courts and state courts.

Burling said that courts will likewise be skeptical of the challenge to St. Paul’s exemption process, given that its hardship is largely theoretical at this point. Plaintiffs who’d actually gone through the process would have an easier time convincing a judge they’d been harmed by it, he says.

On the other hand, he says, those process challenges could potentially give a rent control-skeptical court an opportunity to strike down St. Paul’s ordinance without wading into the morass of deeper constitutional issues.

City politicians, including Mayor Melvin Carter, have endorsed exempting new construction from rent control. But a provision of the city charter saying that voter-passed ordinances can’t be repealed within a year of passing makes it unclear whether the city council can make such a substantial amendment.

Barring the success of a longshot legal challenge, the city is stuck with the country’s strictest rent control law and all its attendant consequences.

Christian Britschgi
Christian Britschgi is an associate editor at Reason. After graduating from Portland State University with a degree in political science, Christian worked in public relations before moving into journalism by way of an internship at Reason's D.C. office. He has since written for a number of news outlets, including The American Conservative, The College Fix, The Lens, Watchdog.org, The Orange County Register, the Daily News, the New York Post, and Jacobite. He was a 2020 Novak Journalism Fellow at The Fund for American Studies.