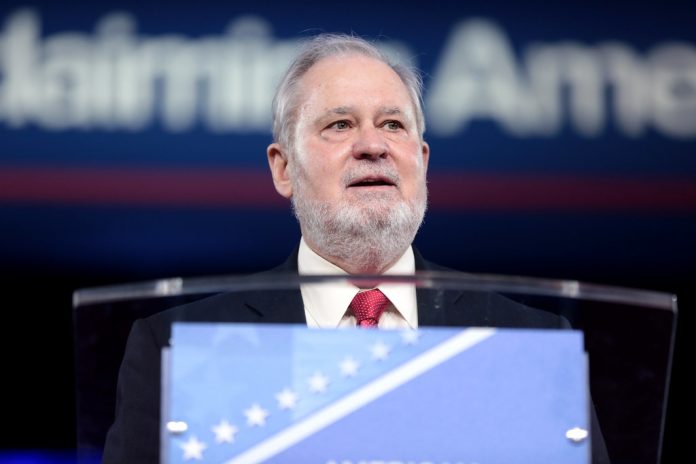 When Hillsdale College President Larry Arnn commented on university teacher education programs in late June, he not only struck a nerve with teacher advocacy groups but he also struck at the root of the decay that has taken hold in our public schools.

Arnn made his comments at a private event while on stage with Tennessee Governor Bill Lee. Afterwards, a secretly recorded video of the event was made public by a Nashville television station and then widely reported.

“The teachers are trained in the dumbest parts of the dumbest colleges in the country,” Arnn said.

He was also unsparing in his assessment of the presence on campuses of the “diversity” movement: “In colleges, what you hire now is administrators . . . Now, because they are appointing all these diversity officers, what are their degrees in? Education. It’s easy. You don’t have to know anything.”

The Hillsdale president was castigated by the usual suspects—various teacher groups in Tennessee, teacher college apparatchiks, and a spokesman for the state association of schools. Naturally, Lee was attacked for his silence as Arnn spoke.

Critics sniffed in indignation. They feigned outrage that anyone would dare to tell the truth about the nation’s schools of education.

Arnn is correct. The situation is arguably worse in education schools and education departments than what he portrayed. A half-century of studies have shown this to be the case.

But more than just producing teachers, university education schools and, to an extent, departments of education at colleges without a free-standing ed school reside at the core of today’s overall decline not just of K-12 education, but also higher education.

This is the case for a number of reasons. Low-quality undergraduate and graduate students flock to these programs created in “educational leadership,” “higher education administration,” and “student affairs.” Then they stream these graduates into college bureaucracy jobs created just for them by their cronies in administration. Next there is the near-complete ideological colonization of ed schools by the noxious doctrine of critical pedagogy and its handmaid “antiracist pedagogy.”

As Arnn points out, the diversity bureaucrats arriving on campuses have almost all been trained in schools of education, which are universally permeated with the ideology of neo-Marxist critical theory. These students are trained according to a neo-Marxist doctrine called “critical pedagogy,” which was concocted in the 1960s and 1970s by the Brazilian Maoist Paulo Freire.

If you search for the reason for the sharp increase of primitive, anti-science “diversity” ideology in universities, look no further than the ingenious organizational dynamic set up by education schools and their administration fellow travelers. This triangle consists of 1) university bureaucrats, usually ensconced in “student affairs” and offices of “diversity,” 2) education school graduate programs, and 3) off-campus nonprofit groups that set standards for the education schools. I address this three-headed creature extensively in my forthcoming book Brutal Minds: The Dark World of Left-Wing Brainwashing in Our Universities. This Cerberus now largely controls the course of higher education, and that course is downward.

Rather than criticize Arnn, those concerned with higher ed should embrace his comments as the opening salvo in a much-needed national conversation about the decline of education in the United States—primary, elementary, secondary, and post-secondary. It should include a close examination of the role of education schools and standalone education departments in the colleges in producing a generation of ideologically straitjacketed teachers now inculcating noxious ideology in the public schools. This national conversation should include a clear-eyed revelation of the ubiquitous cronyism and professional incest that has emerged between university graduate programs and university bureaucracies.

An important question in the midst of this is why the education media—Chronicle of Higher Education, Inside Higher Ed, Education Week—do not explore Arnn’s blunt truths. The collective averted gaze of these publications leads to other questions about these media and whether they actually serve as honest brokers of information or simply as pliant appendages of the education bureaucracy.

As long as the media—particularly education media—dutifully amplifies the knee-jerk response of education school functionaries and their fellow travelers in college bureaucracies, the performative charade will continue uninterrupted.

Let’s have that national conversation, and let’s be grateful to Hillsdale’s Larry Arnn for his candor in getting it started.

Stanley K. Ridgley
Stanley K. Ridgley, Ph.D., IMBA is an associate clinical professor at Drexel University’s LeBow College of Business and author of Brutal Minds: Inside the Dark World of Left-Wing Brainwashing in America’s Universities (Humanix Books, 2022). He is a former military intelligence officer and has taught in Russia, China, India, Spain, and Colombia.