Growing network proves that the battle over free speech on college campuses is far from over.

In 1987, philosopher Allan Bloom published The Closing of the American Mind, a book critiquing higher education in America. As a self-described teacher “dedicated to liberal education,” Bloom offered a thoughtful account of illiberal cultural and ideological trends:

“Civic education turned away from concentrating on the Founding to concentrating on openness based on history and social science. There was even a general tendency to debunk the Founding, to prove the beginnings were flawed in order to license a greater openness to the new. What began in Charles Beard’s Marxism and Carl Becker’s historicism became routine.”

Over three decades later, moralistic assaults on the American political traditions of constitutional neutrality, rationalism, freedom, and equality under the law have not dissipated. Attacks on free speech have particularly intensified, manifesting as both “cancelation” of dissenting individuals and self-censorship.

Though examples of the phenomenon are too numerous to recount, one anecdote and two data points are worth mentioning here. Last September, the Massachusetts Institute of Technology (MIT) canceled a guest science lecture by University of Chicago professor Dorian Abbot due to his support for merit-based college admissions. Even though Abbot had been expected to deliver a lecture on atmospheric and planetary sciences, his critics labeled his views on affirmative action “infuriating,” “inappropriate,” and “oppressive”—fatal ideological stains accentuated by Abbot’s being “white.”

Elsewhere, a 2021 survey of 37,000 college students by the Foundation for Individual Rights and Expression (FIRE), College Pulse, and Real Clear Education found that over 80 percent of students engage in self-censorship at least some of the time, and 66 percent deem it acceptable to shout down a speaker. This represents a concerning upward trend against freedom of expression.

Some would argue that Bloom’s “closing of the American mind” thesis is playing out in real time. Yet every action invites a counter-action. Those who believe in the value of free speech are not just going to surrender this hard-fought principle and constitutional right. After the Abbot incident, a group of MIT alumni, faculty, students, and friends formed the MIT Free Speech Alliance (MFSA), a nonprofit and nonpartisan organization created to “promote and defend MIT’s cardinal values,” including free speech and expression, viewpoint diversity, academic freedom, and open scientific inquiry. As of May 16, 2022, the alliance had 804 public members.

MFSA joins the Alumni Free Speech Alliance, a growing national network founded in October 2021 by alumni groups from Cornell University, Davidson College, Princeton University, the University of Virginia, and Washington & Lee University. Currently, the network has 13 groups (Table 1), with the Harvard Alumni for Free Speech as the newest addition. 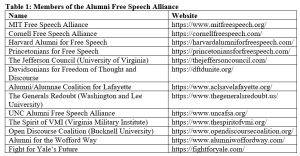 Members of this new enterprise are our modern-day freedom fighters of higher education, who subscribe to the Chicago Principles, a set of values and commitments to free inquiry, debate, deliberation, and expression articulated by the Committee on Freedom of Expression at the University of Chicago in 2014. 87 universities have endorsed the Chicago statement already.

Historically, freedom to express novel ideas or unpopular opinions, a hallmark of liberalism, has been respected in American academia and upheld against temptations to censure on both the left and the right. In 1932, the University of Chicago invited William Z. Foster, the Communist Party’s presidential candidate, to address its audience in spite of loud criticisms. In 1969, Saul Alinsky, the New Left radical theorist and practitioner, delivered a speech on community organizing and race at the University of California, Los Angeles. In 2015, Walter Kimbrough, former president of the Philander Smith College, a historically black institution, invited conservative provocateur Ann Coulter to speak on the college’s campus.

A large part of the rationale for restricting controversial speech on campus in the present lies in a desire to protect students—from hate speech, speech “violence,” misinformation, and any feelings of discomfort, alienation, or marginalization. When the Harvard community debated an invitation to its alum Charles Murray, one member of the faculty equated free speech on campus with “the rights of white men and conservatives to disrespect, insult, bait, and degrade everyone else.” Others have cited the rising financial costs when universities and colleges host controversial speakers. UC Berkeley reportedly spent $600,000 on security for Ben Shapiro, who was invited by the Berkeley College Republicans in 2017. Left unsaid is that Shapiro’s price tag pales in comparison to the school’s $25 million annual budget for “equity and inclusion.”

If American higher education continues its leftward lurch undeterred, and its leaders increasingly give in to the mob’s woke fragility, the financial cost of platforming controversial speakers will only get higher. More young students will be incited to shout speakers down or even use violence to stop their compatriots from hearing politically incorrect ideas.

More importantly, colleges and universities will be doing young Americans a huge disservice by deciding for them which speeches are appropriate on campuses and filtering the variety of opinions available using subjective tools. President and CEO of FIRE Greg Lukianoff and social psychologist Jonathan Haidt offer an important retort in their book The Coddling of the American Mind:

“The more we strive for perfect safety, the harder it is to venture out into the world and learn its lessons. Children are thus unprepared to deal with people who hold ideas inimical to the ones they have been taught. College and life beyond it are filled with different ideas; it’s a mistake to shield students from such controversy. Instead, they should learn how to listen to and debate with new and uncomfortable ideas.”

The Alumni Free Speech Alliance is a necessary oasis of moral courage and practical guidance for students, faculty, and friends of higher education. The principle of free speech must not be made subservient to other higher-education “values” such as diversity, equity, and anti-racism. After all, the freedom to disagree or dissent is a vital ingredient of diversity, isn’t it?

And let us also be reminded: Foregoing freedom of expression for the sake of safety and inclusion will undoubtedly trickle down to K-12 education and the general population, damaging our democracy and social cohesion. At a recent school board meeting at the Conejo Valley Unified School District in Southern California, several parents sternly disparaged their fellow attendees as “disgusting,” “racist,” “hateful,” and “transphobic.” What was the alleged crime? Parents spoke against the teaching of transgender ideology in the district’s lower grades. Intolerance grows where freedom to disagree wilts.

Wenyuan Wu
Wenyuan Wu holds a Ph.D. in international studies from the University of Miami and is the executive director of Californians for Equal Rights Foundation.