Chicago Arrests Dropped 74% Over Past Decade 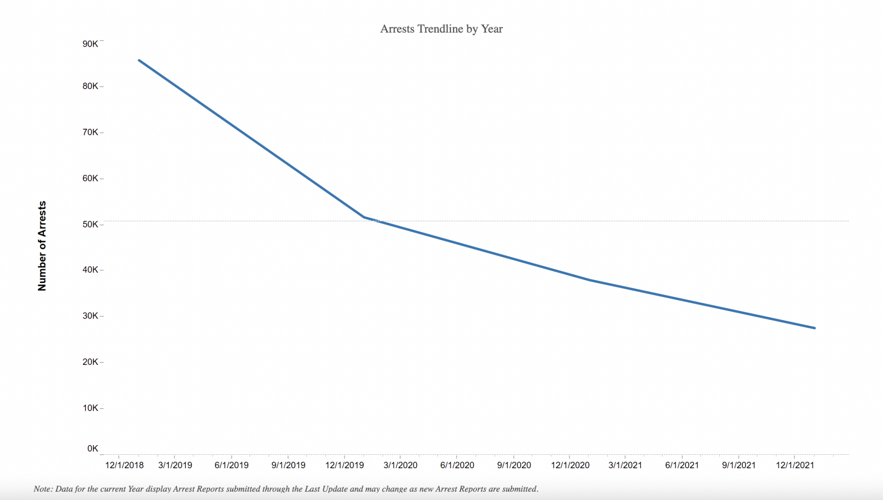 However, in seven major crime categories, there has been a reduction in crime from 2017 to 2021.

The reduction in arrests follows a national trend where numerous police departments around the country are reporting record-low number of arrests in 2021 when compared to the past decade.

Los Angeles, St. Louis, San Antonio, Atlanta, Philadelphia and Ann Arbor, Michigan, are just some of the other cities that have reported significant drops in police enforcement over the past several years, many without an accompanying drop in serious crime.

Spokane County Sheriff Ozzie Knezovich in the state of Washington attributed the decline in enforcement to the political climate created by high-profile police incidents over the past eight years, as The Center Square previously reported.

Knezovich cited the shooting of Michael Brown in Ferguson, Missouri, in 2014, the ambush and killing of five police officers in Dallas in 2016 and more recently the death of George Floyd in 2020 as the primary reason for the decline in enforcement.

“The Ferguson Effect is a real thing. Police officers started to back away from enforcement,” Knezovich told The Center Square. “You saw it across the nation. You wonder why you see less and less enforcement and more and more crime, it’s woke politicians and activists and the media have made it so. They wanted us to disengage.”

Tom Gantert and Brett Rowland
Tom Gantert worked at many daily newspapers including the Ann Arbor News, Lansing State Journal and USA Today. Gantert was the managing editor of Michigan Capitol Confidential for five years before joining The Center Square. Brett Rowland has worked as a reporter in newsrooms in Illinois and Wisconsin. He most recently served as news editor of the Northwest Herald in Crystal Lake, Illinois. He previously held the same position at the Daily Chronicle in DeKalb.