A University of Arizona student was reported to administration for attempting to get her friends to guess the word “cotton” during an online drawing game, according to the school’s bias response team reports recently obtained by The College Fix.

“[She] claims she was only trying to make a historical reference and did not have discriminatory intent,” the complaint added, but “several members of the zoom call told her the drawing was inappropriate.”

This was one of 13 bias reports obtained through a Freedom of Information Act request.

The university initially rejected the request for records, arguing privacy concerns made them privileged. But the Arizona-based Goldwater Institute, in partnership with The College Fix, sent a legal demand letter arguing that the records were not, in fact, privileged under state law.

Earlier this month, the University of Arizona handed over the requested documents. The names of the involved parties were redacted by the school in order to protect their privacy.

The reports were obtained as The College Fix continues to investigate the types of complaints lodged through bias response teams at college campuses across the nation. More than 32 universities have been included in the investigation so far since it launched in 2019.

The cotton-drawing incident took place in April 2021, when a group of students played the Pictionary-like online game skribbl.io with friends and one student was given the word “cotton.”

According to one of her six teammates, the student then began drawing “a Black person picking cotton in a field.” The student further said that while they were not an involved member, the incident “was very inappropriate and distressing.”

“All of us feel deeply ashamed that a member of our organization would be so insensitive and we want to help [her] understand why [her] actions were so hurtful and how she can grow in the future.” 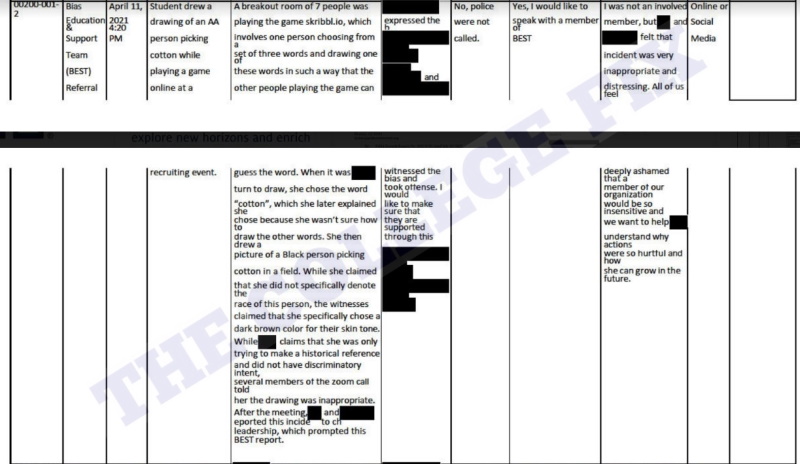 The student reported the offending student to the University of Arizona’s Bias Education & Support Team, or BEST.

According to the school’s website, the team is “committed to fostering a safe and inclusive environment for all members of our Wildcat community.”

A spokesperson for the University of Arizona did not immediately respond to a request by The College Fix to comment for this story.

Under the BEST program, a student may anonymously report another student or professor if the student feels they have either witnessed bias firsthand or heard about it from someone else.

“The University of Arizona is also committed to the freedoms guaranteed under the First Amendment of the Constitution,” the website reads. “While we may not always agree with the ideas and opinions of others, we must honor their right to express them.”

But while the school states BEST does not “restrict free speech,” “impede academic freedom,” or “issue disciplinary sanctions,” anyone on campus subjected to a report may find themselves subject to a process to correct the offending behavior.

“Should a report be submitted about you, our goal is to connect you with appropriate resources, information, and skills to more effectively promote inclusion in your sphere of influence,” the school’s website states. “In addition to resources that promote education, BEST may also provide opportunities for students to engage with one another in a way that promotes understanding and healing. Opportunities for both parties to engage with one another are optional and will always be facilitated by a professional staff member.”

Faculty members are also subjected to the process.

“In the case of a faculty or staff member expressing bias towards a student, BEST may also engage with the appropriate supervisor, department head, or director who can support our efforts to connect the employee with appropriate resources.”

In one April 2021 case, a student reported a professor for using “outdated” terms to refer to transgender people.

According to the student, the professor had tried to be inclusive by sending a hypothetical question to students using an example of a transgender individual.

“However, in the hypo and in a previous class discussion, he used inappropriate and outdated terminology such as transsexuals and transgendered,” the student reported.

“If a professor is going to be speaking about trans people/issues, they should know and use the proper terminology,” the student wrote, adding that trans students in his class and at the school “should not be made to listen to professors use these outdated and offensive terms.”

The student also complained the professor, when reading aloud a historical court case about disabilities, also used the term “mentally retarded” outside the actual text of the decision.

“My issue is not with the case because it was obviously written in a different time,” the student wrote. But the professor “continued to use this term even after being told by students that it was inappropriate and is often considered a slur today.”

Other incidents reported to the BEST system included:

• A student was overheard saying he regretted putting his gender down as “neutral” on his housing application because “he doesn’t want to be in a hallway with a bunch of ‘trannies.’” The student then expressed a desire to move so that he wouldn’t have to live in this hallway, a section of the dorm reserved for the “gender inclusive theme community.”

• During an April 2021 Zoom class, a student expressed a desire to move to a city in Mexico where her family lived. The professor then asked the student if she had a green card. When she said she was born in the United States, the professor told her to be careful going to Mexico because crime is a common occurrence there.

• In February 2021, a professor discussing “the theory of symbolic interaction and shared meanings” used the example of George Floyd and Breonna Taylor — both African-Americans killed by police – as “illustrations of shared meanings between cultures.” The professor then discussed how she herself had not had any negative experiences with the police and therefore “could not share the meanings of people’s grievances over these events.”

“People are entitled to their opinions, but what she did made us all very uncomfortable,” wrote one student in a complaint to BEST. “The classroom is not an appropriate place to discuss these matters,” she wrote. “Supporting the police openly in class during such a sensitive time in this country, as well as during Black History Month, was completely unprofessional.”

Christian Scheider
Christian focuses on investigative, enterprise and analysis reporting. He is the author of "1916: The Blog" and has spent time as a political columnist at USA Today, the Milwaukee Journal Sentinel, and National Review Online. His op-eds have been featured in The New York Times, Wall Street Journal, New York Post, City Journal, Weekly Standard and National Review. He has also been a frequent guest on political television and radio shows. He holds a master’s degree in political science from Marquette University and lives in Madison, Wisconsin.