Relative Market Stability in the Dog Days of Summer (Analysis)

Relative market stability for stocks, bonds, and longer-term interest rates in the dog days of August, after a summer plunge in stocks.

August business surveys provide polar opposite views on the important service sector, which makes up 2/3 of the US economy. S&P’s survey concluded that “August saw the US economy slide into a steepening downturn, underscoring the rising risk of a deepening recession as households and business grapple with the rising cost of living and tightening financial conditions.”

In contrast, the August ISM survey registered a 61 for overall service company activity and 62 for new orders. Readings of 60 indicate strength. Both of these surveys can’t be right. The S&P results are more in line with what we anticipate.

Amid all the uncertainty surrounding business conditions, businesses appear hesitant to lay workers off. Weekly initial unemployment claims fell to 222,000 in the first week of September bringing the 4-week average to 233,000, down from a peak of 247,000 in July.

Tuesday’s August consumer price data will benefit from an 8% monthly decline in oil prices to $93. Declines in a range of other commodity prices along with reports of minimal inflation in business surveys point to a significant softening in demand. These developments should produce a fairly mild inflation report for total consumer prices. Core inflation also is expected to be a relatively modest 0.3% to 0.4%.

Thursday’s August report on retail sales also is expected to show only a modest increase. After soaring earlier this year, retail sales increased at only a 5% annual rate in the three months ending in July. With depressed auto sales and another sharp drop in oil prices, we expect little, if any, increase in retail sales. 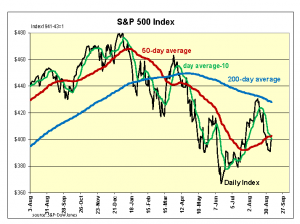 After a sharp decline in the last half of August, stocks had a relatively stable week with all indexes either flat or slightly higher. This relative stability was mirrored in bond market, with longer-term interest rates also mostly unchanged. 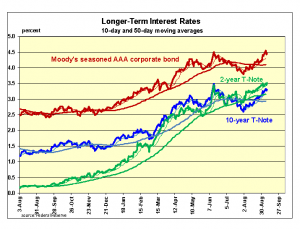 One possible reason for stability is the lack of any definitive news. Two respected August business surveys reported widely different pictures of the service sector—one pictured a boom, the other a bust. Slightly lower unemployment claims point to a tight labor market.

The stock market’s technical indicators remain negative. After hitting a major resistance level in mid-August, the following steep decline leaves most indexes at or below other potential levels of resistance.

In response to some signs the economy remains strong, the Fed is likely to raise interest rates by ¾% within two weeks. More important is whether they take as much money out of the economy as they intend.

It will be several weeks before the Fed provides enough information to determine if the restraint in the past two months has continued in September. We expect it has. As a result, we expect Fed policies will cause a downturn in the economy in the months ahead.

With the S&P500 overvalued by 25% and the Fed draining money from the economy, stocks will likely remain under pressure. Although anything is possible, it is difficult for stocks to go up when the Fed is taking money out of the economy. With a growing potential for a steeper business downturn ahead, investors should remain defensive.

For more from Robert Genetski.