McCaughey: The Voting Rights Act Has Been Hijacked for Partisan Gain 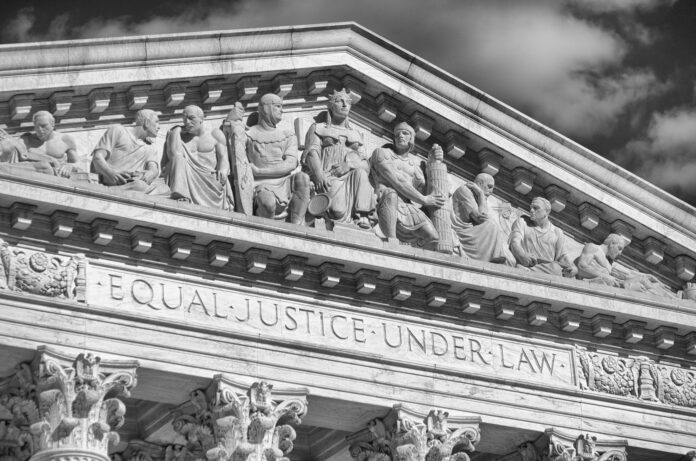 Democrats and their media allies are sounding the alarm that the Supreme Court is “dismantling” the Voting Rights Act of 1965. The Washington Post warns that this term, the court will likely strip Black voters of their right to elect someone “who represent(s) them.”

Don’t believe it. Truth is, the Democratic Party has converted the Voting Rights Act into a scam.

Twenty-two congressional districts in the United States are engineered to guarantee that Black voters are in the majority.

These rigged districts elect Democrats every time, without fail, though not always a Black Democrat. (Democrat Rashida Tlaib was elected from Michigan’s Black-majority 5th Congressional District.)

Not one of these racially gerrymandered districts elects a Republican. Ever.

Twenty-two rigged districts—that’s nearly three times the size of the Democrats’ majority in the House.

This racial gerrymandering is being done in compliance with the Voting Rights Act, a law that was urgently needed but has outlived its usefulness. Now it’s being used cynically as a tool to lock in Democratic Party dominance.

America doesn’t need a rigged election map to ensure Black candidates are elected. Most Black members of Congress, including 35 out of 53 members of the Congressional Black Caucus, are elected from districts without Black majorities.

In Merrill v. Milligan, the Biden Justice Department is joining forces with the NAACP to keep the scam going. They are challenging the state of Alabama’s election map, explicitly demanding that at least two of the seven congressional districts have guaranteed Black voting majorities. Alabama currently has one.

Last week, the Supreme Court heard two hours of impassioned oral argument over whether it should compel Alabama to maximize the number of minority-controlled voting districts.

Alabama argues that it’s time to end “racial” gerrymandering. Creating a second Black-majority district would require splitting up the state’s coastal region, on the premise that race is more important than the commercial and environmental concerns that seacoast residents, Black and white alike, want represented in Congress.

President Joe Biden’s solicitor general, Elizabeth Prelogar, told the justices that eliminating racial gerrymandering would “leave Black voters” with “no ability to elect their preferred representatives.” That argument is laughable.

The Voting Rights Act of 1965 was scheduled to last only five years. Congress has renewed it four times for long stretches, despite the huge progress the nation has made toward a fair, multiracial democracy.

In 1965, there was nearly a 50% gap between white and Black voter turnout in Alabama. By 2012, Black voters in Alabama were turning out at higher rates than whites.

Black candidates compete effectively in white-majority areas. Georgia has a Black U.S. senator, and his GOP challenger is also Black.

The John Roberts-led court has long deemed the Voting Rights Act of 1965 an anachronism. In 2013, the court struck down portions of it after Shelby County, Alabama had challenged the act in 2010 and argued that “Congress’s failure to modernize the law in light of the enormous improvements in minority electoral opportunities” leaves no other option.

Now, the Court should strike down the rest of this obsolete statute. All Americans, including Blacks, deserve a fair chance to participate in our democracy. But racial gerrymandering is no longer necessary.

Segregating voters by race presumes, odiously, that only a Black can represent Blacks, and by implication, only a white can represent whites. Americans know better. They elected a Black man to be their president twice.

The Democratic Party, with a thin House majority, would have liked to grab control of a second Alabama election district in time for the midterm elections. The Court’s decision to hear Merrill v. Milligan ended that ploy.

Ultimately, the stakes are higher than one Alabama district. Across the nation, election districts are being rigged to benefit the Democratic Party, under the false pretense of protecting Black voting rights.

It’s time to end that outrage.

Betsy McCaughey
Betsy McCaughey is a former lieutenant governor of New York and chairman of the Committee to Reduce Infection Deaths. Follow her on Twitter @Betsy_McCaughey.