The hype about wind and solar energy keeps colliding with the hard reality of land-use conflicts. Nowhere is that more obvious than in Ohio, where 41 townships have rejected or restricted the expansion of wind and/or solar projects since last November. In addition, at least eight Ohio counties have implemented restrictions on Big Wind and Big Solar over that same time period.
The soaring number of rejections – all of which are documented in the Renewable Rejection Database – brings the total number of solar rejections in the U.S. this year to 67. That total includes the October 12 unanimous vote by the Linn County, Iowa, Board of Supervisors to implement a moratorium on solar projects in their county. In all, since 2017, 94 communities across the U.S. have rejected or restricted Big Solar.

As I have noted in many previous articles, these hundreds of rejections are routinely ignored by big media outlets. Further, they don’t square with the schemes being promoted by academics from Princeton, Stanford, and other elite universities who routinely claim that the U.S. can build thousands of megawatts of new solar and wind capacity in rural America and do so in just a few years. But the facts cannot be denied.

Here is the lowdown on what’s happening in Ohio. On August 23, the Ohio Capitol Journal reported that “At least 10 Ohio counties have passed resolutions blocking the development of new utility-scale wind and solar projects within all or part of their jurisdictions in the last year. At least two more counties are actively considering such a prohibition.” The same media outlet listed the counties and townships that have rejected renewables. They include:

The sum of all the Ohio townships on that list is 36. On August 31, Andrew Carter of the Marion Star reported on another set of rejections. He wrote, “During their August 18 meeting, the Marion County Commissioners voted to approve resolutions submitted by trustees from Big Island, Claridon, Richland, and Salt Rock townships that will limit such development. All four resolutions followed the same format with the same language. The commissioners voted to approve a similar resolution put forth by the Pleasant Township Trustees at the conclusion of a public hearing held June 7.” Adding the Marion County rejections to the list compiled about a week earlier by the Ohio Capitol Journal brings the total number of townships in Ohio that have rejected wind and or solar over the past year to 41. In addition, over that same time frame, eight Ohio counties have banned either wind or solar, or both.

The moves in Ohio, as well as the recent rejection by the supervisors in Linn County, Iowa, prove yet again that the Midwest has become the epicenter of the rural backlash against Big Wind and, increasingly, Big Solar. The backlash in Ohio is particularly notable because it is a swing state that helps determine who becomes president of the United States. 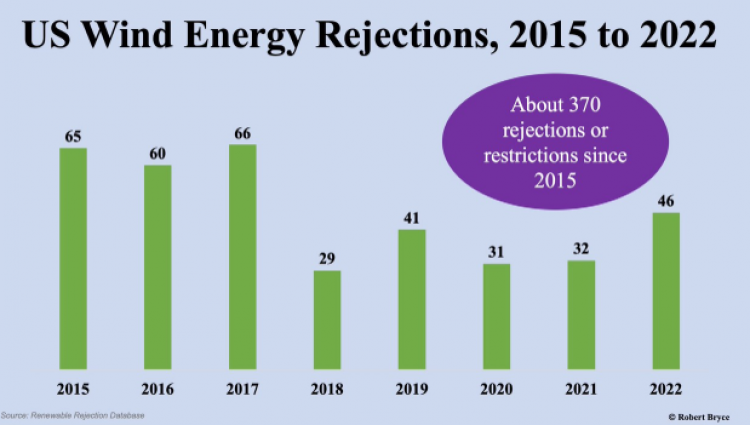 But the state legislature is also listening to rural communities. Last year, it passed Senate Bill 52. Which allows counties to prohibit the construction of renewable projects. As reported by EnergyWire last year, “Policy support for renewables has been eroding in Ohio for a decade.” The erosion of support, of course, is due to surging local opposition to renewable projects. Furthermore,  SB 52 provides a clear example of the urban-rural divide when it comes to renewable energy policy and siting. The bill, which was signed into law by Ohio Gov. Mike DeWine, (a Republican) passed through both chambers of the Ohio legislature but it did not get a single vote from a Democratic legislator.

Furthermore, climate-activist groups continue to claim that these rejections are misguided. In August, a media outlet called Planetizen quoted Neil Waggoner, a Sierra Club employee who works for the group’s Beyond Coal campaign as saying that the Ohio bans on wind and solar “close off communities from investment dollars” and also “limit local property owner rights.” That’s an almost-funny statement coming from a group that seems determined to limit the property rights of rural Americans who don’t want their viewsheds ruined by 600-foot-high wind turbines.

The punchline here is obvious: the hype about major expansions of renewable-energy capacity ignores first principles. As Lee Cordner, an Oregon-based consulting electrical engineer who has more than 40 years of experience in the industry puts it, all energy infrastructure projects have to answer three questions: “Where are you going to put it? How are you going to connect it? And how are you going to pay for it?” The latest rejections in Ohio, Iowa, and other states, show once again, that there aren’t enough places in the U.S. to put all the wind turbines and solar panels that climate activists and academic models claim are possible.

I’ll end with a quote from Jesse Ausubel, the head of the Program for the Human Environment at Rockefeller University who I wrote about in these pages last week. Ausubel foresaw the problems with wind and solar energy way back in 2007. Indeed, 15 years ago, Ausubel wrote a landmark essay in which declared, “renewables are not green.” He continued, “How then can we meet more stringent consumer demands and stay on course for decarbonization? The inevitable reply is nuclear energy.”

Robert Bryce is the host of thePower Hungry Podcast, executive producer of the documentary,Juice: How Electricity Explains the World, and the author of six books, including most recently, A Question of Power: Electricity and the Wealth of Nations.

Robert Bryce
Robert Bryce is the host of thePower Hungry Podcast, executive producer of the documentary,Juice: How Electricity Explains the World, and the author of six books, including most recently, A Question of Power: Electricity and the Wealth of Nations.