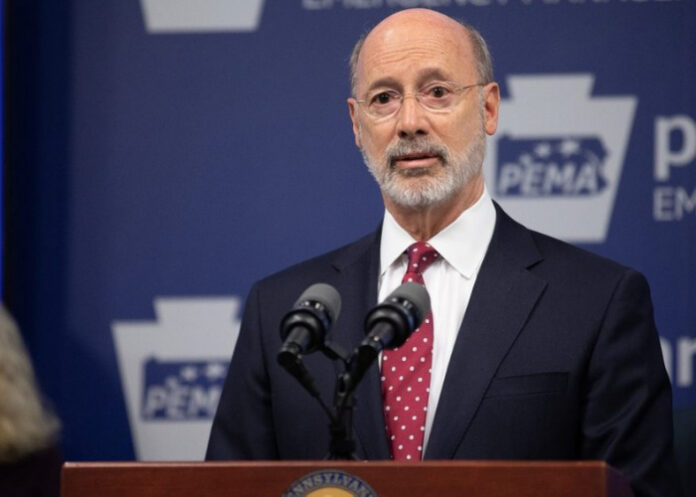 If Pennsylvania joins a multistate agreement that restricts carbon dioxide emissions, the commonwealth could jeopardize its position as an energy producer and exporter without achieving discernible environmental benefits, according to elected officials who are resisting executive actions to address climate change.

The state Senate on Wednesday passed legislation to prohibit Gov. Tom Wolf, a Democrat, from joining the Regional Greenhouse Gas Initiative and imposing carbon taxes without the approval of the Pennsylvania General Assembly.

A state Senate committee last week voted to move to the floor two bills that reaffirm the General Assembly’s authority over tax policy while asserting that Wolf’s Department of Environmental Protection cannot act unilaterally “to abate, control, or limit carbon dioxide emissions by imposing a revenue-generating tax or fee on carbon emissions.”

The Senate passed the House version of the legislation Wednesday by a vote of 33-17, one vote shy of a veto-proof majority.

How are socialists deluding a whole generation? Learn more now >>

“I don’t think the governor has the legal authority to proceed as he is,” said state Sen. Joe Pittman, a Republican representing the 41st District, which cuts across Armstrong, Butler, Indiana and Westmoreland counties.

“At the end of the day, we are not an appendage of the governor’s office, we are a coequal branch of the government,” Pittman said in a phone interview with The Daily Signal, “and if you’re going to slap a $300 million annual electricity tax on the people, then the people’s elected representatives need to have a voice in this process.”

The $300 million figure, found in a document from the state’s environmental protection agency, is drawn from estimates of the costs of  Pennsylvania’s participation in the initiative in 2022.

With Senate action on the House bill, a Senate committee staffer told The Daily Signal, Wolf will have 10 days to decide whether to sign or veto it.

“Senate Bill 950 needs to be considered yet by the Senate Appropriations Committee,” the staffer said. “That bill could be considered by the full Senate as early as the week of Sept. 21.”

Pittman, lead sponsor of SB 950 and vice chairman of the environmental and energy committee, said he is encouraged by the support the House version of his bill attracted and sees a “similar dynamic” at work in the Senate:

With the House vote, there was a very large contingent of the House Democratic Caucus who fully recognize the concern that working women and men and many blue-collar industries have for the potential impact that a carbon tax could have on their livelihoods. I’m hopeful that a similar outcome will occur in the Senate. We need to keep pushing this so we can get the governor to have real conversations about how communities will be affected and severely impacted by becoming part of this agreement.

Wolf issued an executive order in October 2019 instructing the state Department of Environmental Protection to begin formulating regulations that would enable Pennsylvania to enter the climate change agreement.

Initially, the governor had set a deadline of July 31 for the department to present a regulatory plan to the state’s Environmental Quality Board, but he extended this deadline to Sept. 15.

If the state Senate follows the House in passing legislation prohibiting the Wolf administration from implementing anti-emissions regulations without the General Assembly’s approval, it could set up a constitutional showdown.

Wolf should heed the advice of his own advisory committees that recommended against Pennsylvania’s joining the climate change accord, state Sen. Gene Yaw, a Republican representing the 23rd District (which includes Bradford, Lycoming, Sullivan, Susquehanna, and Union counties), said in an interview.

“Why have advisory committees if you’re not going to pay attention to them?” Yaw said. “They’ve had three strikes and they should be out, but the governor is still going forward even though he can’t get support from his own people on the committee. They were chosen because of their expertise in certain areas and because they would give a reasonable, rational approach to certain issues, and they’ve done this.”

‘We Should Be Consulted’

Yaw told The Daily Signal that his concerns about Wolf’s proposed regulations “go beyond” the questions he and other lawmakers have raised about how the governor appears to be overstepping his authority.

As a matter of policy, Yaw said, he isn’t convinced that RGGI would produce tangible environmental benefits but does expect that the resulting regulations would raise energy costs:

I think what the governor is doing is a very narrow, shortsighted view of the environmental concerns that are out there. I have the immediate concern about what this is going to do to electricity rates in Pennsylvania, and these electricity rates will have an effect on health, welfare, and jobs and everything else. These are policy decisions that go beyond any one person, and I think the Legislature needs to be involved in this and that we should be consulted.

The key to RGGI is a Budget Trading Program for carbon dioxide that both limits C02 emissions from electric power plants and issuing “allowances” for the emissions.

In other words, RGGI empowers government officials to implement “cap and trade” measures in which regulators place an upper limit or “cap” on the amount of carbon dioxide at power plants. The regulators also create “allowances” within interstate auctions that may be traded back and forth among companies subjected to the limit on carbon dioxide, so that some may exceed a cap as long as others remain below it.

Wolf has argued that Pennsylvania needs to implement anti-carbon regulations to combat what he describes as a “global climate crisis,” and that this should be done in partnership with other states.

“Even as we continue to work to mitigate the spread of COVID-19, we cannot neglect our responsibility and our efforts to combat climate change,” Wolf said in a June 22 press release.

The state’s Department of Environmental Protection’s website devoted to RGGI highlights the environmental, health, and economic benefits that the Wolf administration expects Pennsylvanians to experience if the state enters the climate change agreement.

But before pressing ahead with alternative forms of energy, Yaw said, he would like to see policymakers take a harder look at the environmental footprint of so-called “clean energy” sources such as wind and solar, and also to consider what goes into the construction of nuclear power plants.

I believe we should have a diverse energy portfolio. Right now, we are an energy exporter and we have all this new natural gas, and this has been enormously beneficial. I’ve also seen numbers that said greenhouse gas emissions across Pennsylvania have dropped something like 30% in the last 15 years. That’s a lot, and it can be attributed to the fact that more of our electricity is being produced by natural gas.

The U.S. Energy Information Administration reports that Pennsylvania is ranked second only to Texas in oil and natural gas production. An article in Forbes four years ago detailed how natural gas enabled the state to lower carbon dioxide emissions by 30%.

“RGGI, in my opinion, takes a superficial look at what the real cost of energy is,” Yaw said. “Let’s take just one example of solar panels. It takes rare earth minerals to make solar panels, and we don’t have enough of those rare earths in the U.S.”

“So, we are going to have to import them, and how are those minerals produced? Well, they are produced by mining. In the Republic of Congo where cobalt is mined, they use young kids for that work. I don’t think we want to be known in Pennsylvania for using kids like this.”

“We have to find a way to recycle solar panels at the end of their useful life or dispose of them, and the same should apply to windmills,” he said. “We have to ask ourselves what is the real cost of energy and what does it mean to say this is clean energy.”

RGGI typically applies to electric power generators fired by fossil fuel with a capacity of 25 megawatts or greater. If Pennsylvania becomes part of the agreement, all five of the state’s remaining coal-fired plants in Keystone, Conemaugh, Homer City, Cheswick, and Montour would be affected, as well as all of the natural gas plants.

Since Pennsylvania would have to accommodate itself to RGGI’s rules and regulations, Yaw said, he is concerned that the state would lose its standing as an energy supplier and exporter.

“We are a generator of electricity,” he said. “These other states [in RGGI] have no generation. They are just importing it and they’re going to say to us that we have to match their emissions standards since we’re the generator. This means Pennsylvania is going to get hurt.”

Pittman, who sponsored the Senate bill, said he has similar concerns about how RGGI would affect the import-export equation. Pennsylvania doesn’t operate in a “bubble,” he told The Daily Signal, and the actions of other states must be taken into account.

“We are part of a multistate power grid and right now, we export electricity to other states,” he said, adding:

Right now we have a very diverse power grid that is able to accommodate fluctuations and commodity pricing and to keep really all the sectors as competitive as possible. And I think that’s an advantage that we would be unwise to give up, particularly whenever you consider the reductions in carbon dioxide emissions. We’ve made substantial progress just in the last 10 or 15 years on our own, and it has been without the heavy hand of government. It’s been through market forces.

This article was originally published by The Daily Signal.

Kevin Mooney
Kevin Mooney is an investigative reporter for The Daily Signal.