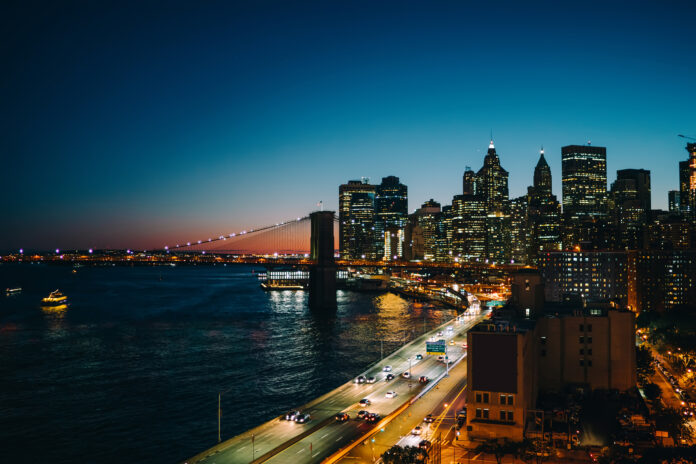 By Eric Kampmann and Alec Klein

“The city seen from the Queensboro Bridge is always the city seen for the first time, in its first wild promise of all the mystery and beauty in the world.” —F. Scott Fitzgerald, “The Great Gatsby”

Listen: The sound you just heard was of a distinct lack of traffic, a dearth of hum, the slight sound of a great city in a death spiral.

That’s a fair question in the wake of the relentless pandemic choking major American cities. The Big Apple is plagued with joblessness, peaking with a 20% unemployment rate this summer, double the national rate.

Want more bleak numbers? Take your pick: About 1,200 restaurants have permanently shuttered since March. The city has around 600,000 fewer jobs than a year ago. About one-third of the city’s small businesses may never reopen.

But, of course, it’s not just about numbers.

It’s the vitality of the city that has been struck down. Tourism is practically a thing of the past. Hotels lay in waste. Broadway remains dark. Offices spaces are just that—vacant.

The Metropolitan Transportation Authority, which operates the subways, is hemorrhaging $200 million a week. Nobody, it seems, is going anywhere. Take a look at the platforms at virtually any subway station: a ghost town.

Imagine the wreckage occurring to the city’s tax base.

The New York of the mind’s eye is lost. The city has always been about the emerald imagination. Making it big a la Sinatra. The scrum of street jockeying. The oasis of Central Park with its nooks and crannies. The bubbling concoction of diversity and greatness.

A favorite activity: Walking up Broadway, stopping for a hotdog at Gray’s Papaya, getting a slice at Famous Original Ray’s Pizza, listening to snippets of arguments, of passions, of cabals being formed along the broad boulevard, from one end of the city to the other.

Call it pop-up entertainment on the go. Let’s not forget, this is the city that stood up to 9/11. It’s the city where George Washington prayed to God upon becoming the first president of this republic.

If the pandemic doesn’t kill New York, the reaction to it just might.

The city never was about its soaring skyscrapers; it has always been about its towering people. But people are being turned away in droves. Others are fleeing en masse.

The dark days of early COVID-19 are no longer gripping the city; indeed, New York has managed to keep infection numbers low for several months. But even as the city has quelled the number of coronavirus cases, New York has witnessed the rise of another affliction: A startling surge in shootings and other violent crimes.

Shooting victims rose 81% and shooting incidents increased 76% from Jan. 1 through Aug. 2, compared with the same time a year ago, according to the New York Police Department. The recent rioting and looting have cast a long shadow over the city, the likes of which we haven’t seen in half a century.

The last time the city felt this dangerous was way back when New York was financially destitute in the 1970s, when, if you took a stroll down Times Square, you were liable to see an unconscious body prone on the sidewalk, as undisturbed people stepped over and around it.

But even New York of that hard time wasn’t as bad as it is now.

What happened to New York, the capital of the world? The Rome of the 21st century? The center of culture, media, finance, theater, food, fashion—you name it.

What’s happening to New York is happening to other great cities across the nation—and, for each metropolis, it’s largely not a medical event. It’s a conscious decision about how we live and what we do.

If, with the beginning of the fall, we can send New York children back to the largest school system in the United States with more than 1 million students, we can surely find a way to open up much of the rest of the city.

Here’s what we think needs to happen to resuscitate the city, with appropriate safeguards:

While we’re at it, the city should slash prices for subways and other public transit by half.

Much as the federal government has done, the city should institute tax and payroll incentives to get the city back to work.

And, finally, the city should launch a campaign, something along the lines of “New York Is Back.” It should rival the “I Love New York” slogan that originated in the 1970s during the city’s last epic crisis.

What we need now is political courage, not grandstanding. It’s a human decision whether we save the city or not.

Originally posted by The Daily Caller. Republished with permission. Content created by the Daily Caller News Foundation is available without charge to any eligible news publisher that can provide a large audience. For licensing opportunities of this original content, email licensing@dailycallernewsfoundation.org.