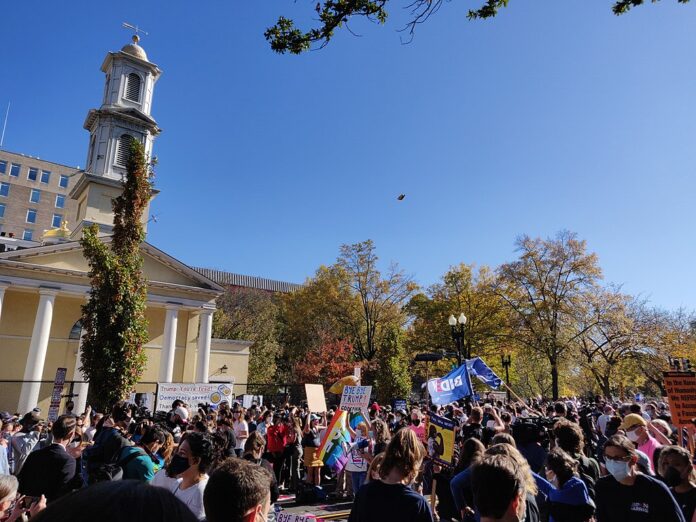 The college president said she wanted to be sure the students knew they had the support of the school. “I would defend free speech for our conservative students as vigorously as for our liberal students,” Rivera said, Fox News reports.

Macala is located near Minneapolis, where mobs engaged in rioting, looting, and arson for months after the death of George Floyd in May. Violence subsided only after the state government called in more than 4,100 National Guard troops, FOX 9 reports.

A post-election, anti-Trump riot in Minneapolis resulted in the arrest of more than 600 people after the mob marched, shouted, and blocked cars while shutting down a major interstate highway. On election night, before results were reported, protesters were setting off fireworks, throwing street signs and garbage into the streets, and spray-painting businesses, Newsmax reports.

“Who brings a knife and a hammer and a flammable liquid to in fact start fires to a peaceful protest?” New York City Police Commissioner Dermot Shea said in a news conference on Thursday.

The governor of Oregon called in the National Guard after police reported “widespread violence and riots” in Portland, Forbes reports. Portland has had continuous violence, vandalism, and unrest since the initial Floyd protests. Rioters and vandals once again targeted local businesses, smashing storefront windows. Independent reporter Andy Ngo shared a photo of a sign carried by the Portland rioters that said, “We Don’t Want Biden—We Want Revenge” and bore a picture of a semiautomatic rifle.

One of the protesters was arrested after driving a truck through a line of police officers on bikes. In total, about a dozen people were arrested in Seattle.

In Washington, D.C., a mob dressed in black and carrying black umbrellas marched with a sign that said, “Burn Down the American Plantation,” the Washington Examiner reports. Marchers shouted, “If we don’t get it, burn it down,” while burning the American flag and setting off fireworks.

In Philadelphia, two men from Virginia were arrested with shotguns near the Pennsylvania Convention Center, where votes were being counted. Police discovered an AK-47 in their vehicle, FOX News reports.

The violence and mob activity in American cities is about far more than just political protesting and expression of free speech; it is about destroying everything and “starting at zero,” columnist Victor Davis Hanson writes for Townhall.

“The point of the mob is to wipe out what it cannot create,” Hanson writes. “It topples what it can neither match nor even comprehend. It would erode the very system that ensures it singular freedom, leisure and historic affluence.

“The brand of the anarchist is not logic but envy-driven power: to take it, to keep it, and to use it against purported enemies—which would otherwise be impossible in times of calm or through the ballot box,” Hanson writes.