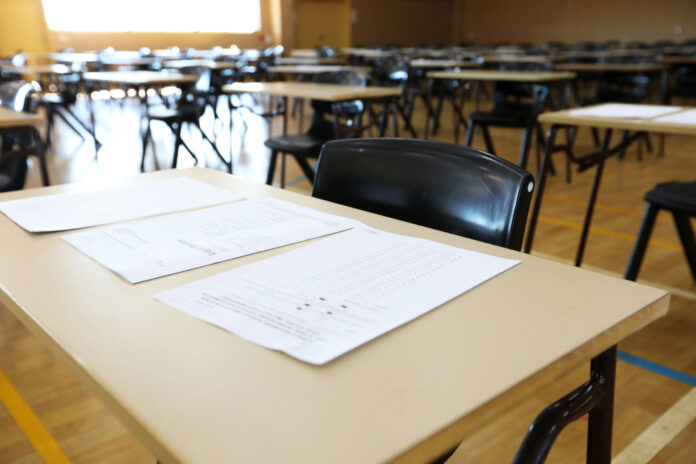 Indiana’s school voucher program does not cost the state money and eliminating it will not help increase teacher pay, the governor’s commission on teacher pay said in a new report.

The idea that eliminating school vouchers would allow the state to fix the problem of low teacher pay is “flawed for several reasons,” the report says, explaining the voucher program was set up to provide more funding for students in public schools than for students in private schools.

“In Fiscal Year 2020, state tuition support payments made for students at public schools averaged $6,979. The average recipient of a Choice Scholarship, Indiana’s voucher program, received only $4,661,” the report says, adding the voucher program actually saved thousands of dollars every time a family used a state voucher to send their child to a private school.

Indiana’s school voucher program, officially called the School Choice Scholarship Program, was championed by former Republican Gov. Mitch Daniels and became law in 2011. The Indiana State Teachers Association sued Daniels to stop the voucher law from taking effect, claiming the program violated the provision in the state constitution that says no funds can be drawn from the state treasury and be given to any religious organization. The ISTA lost, and the voucher program was phased in over three years, becoming available in 2014 to all residents who met income requirements.

There are now 324 private schools participating in the program.

In order to qualify for a voucher, a child must usually first spend two semesters in a public school. But students who attend an “F” rated school that is their district school for any length of time can also qualify, as can some special education students and students whose sibling is already attending the same private school.

As with most school choice programs, the money follows the child.

The Next Level Teacher Compensation Commission was formed last year by Republican Gov. Eric Holcomb and asked to make recommendations on raising teacher pay in the state.

The commission was chaired by Michael L. Smith, former executive vice president of Anthem Blue Cross Blue Shield, and included the governor’s education advisor Katie Jenner, who is the incoming Secretary of Education, and also the executive director of the Indiana State Teachers Union, Dan Holub. Other members included a school superintendent from Evansville, a human resource officer from Granger, a math teacher from Westfield, a school board member from New Albany, the head of the Indiana Parenting Institute, the director of school finance for the Indiana Department of Education and several retired business executives, including Bob Jones, the former CEO of Old National Bank; Nancy Jordan, former senior vice president of Lincoln Financial Group and Tom Easterday, former senior executive vice president of Subaru of Indiana.

In its report, the commissioners say they took a data-driven approach, reviewing all available data from state agencies and from the National Center for Education Statistics and consulting with teachers, citizens and education experts in Indiana and in other states.

“The goal of our work has been to ensure Indiana’s compensation practices will yield a high-quality pool of teachers for years to come,” the commissioners said in the report. A competitive average salary for Indiana teachers for the 2018-2019 school year would have been $60,000, they determined, about $6,000 more than the current average teacher salary in the state.

In hearings around the state last year, the commission heard from hundreds of ISTA representatives, some of whom said they wanted the commission to get rid of the school voucher program.

At the hearing in Elkhart, the head of the local teacher’s union complained to the South Bend Tribune about school choice, saying: “When students are allowed to be pulled to take a voucher to go to a different school, it impacts everyone. It impacts the profession.”

The Next Level Commission on Teacher Compensation made clear in its report that program actually saved money.

“When factoring in local and federal education spending, the average voucher amount for students in Indiana’s Choice Scholarship program is about 35 percent of the average per-pupil cost in traditional public schools,” they said. “The state of Indiana saved thousands of dollars per student for each student who left a district school to participate in the voucher program.”

The report goes on to say if students in the voucher program returned to public schools, they would receive more funding than they had in the private schools, thereby reducing per-pupil money given to schools statewide.

“This would strain public school budgets even further,” the report says.

The commissioners give two more reasons why eliminating vouchers would not help the state provide teachers more competitive pay – saying any increases in funds in public schools would be offset by the need to hire additional teachers and also, the voucher program makes up such a small portion of the state’s education budget that it’s hardly worth consideration, when looking to raise funds for higher teacher pay.

“In Fiscal Year 2020, $171 million was distributed for Choice scholarships, Indiana’s voucher program,” the report says. “This is just 2.35 percent of Indiana’s tuition support payments. Similarly, Indiana’s tuition support payments to charter schools were $254 million in Fiscal Year 2020, or under 3.5 percent. Eliminating the state’s voucher program would mean more students being educated in public schools, but with fewer dollars per pupil. Experts can debate the merits of Indiana’s school choice policies, but the math behind the program demonstrates elimination would not fix the teacher pay challenge; it would worsen it.”