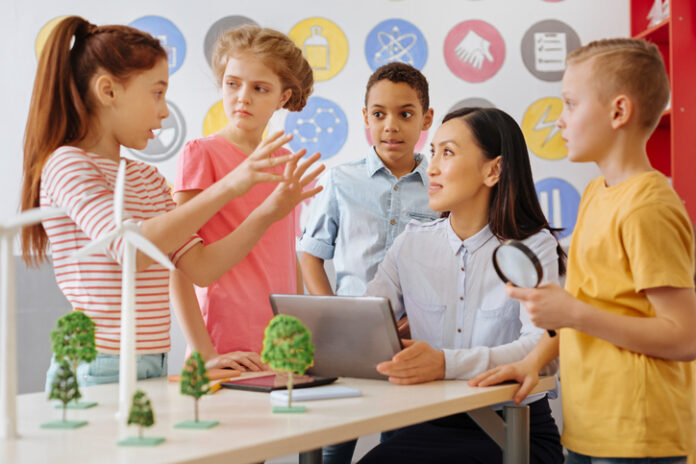 An education savings account (ESA) program would benefit New Jersey both fiscally, by saving the state money, and non-fiscally, by accruing to New Jersey children the benefits that generally come with education choice programs, a fiscal analysis released by EdChoice finds.

With an ESA, state education funds allocated for a child are placed in a parent-controlled savings account. Parents then use a state-provided debit card to access the funds to pay for the resources chosen for their child’s unique educational program, such as tuition at a private or parochial school, tutoring, online classes, transportation, specialized therapies, textbooks, and even college courses while still in high school. Unused ESA funds may also be rolled over from year to year and can be saved to pay for future college expenses.

The analysis begins by noting that per-pupil funding in New Jersey public schools in Fiscal Year 2018 was $22,424, a 70 percent increase above inflation since 1987 and increasing annually over that time by 2.3 percent above inflation on average. As a percentage of state GDP, New Jersey’s education spending puts it at second-most in the United States.

If New Jersey enacted an ESA program that set its funding at 90 percent of the full funding level (roughly $6,500) intended under the state’s School Funding Reform Act, passed in 2008, and just 1 percent of state students participated (roughly 13,300 students), it would mean a combined savings to local districts and the state government of more than $97 million annually. If 10 percent of Garden State public school students participated (roughly 130,000 students), the program would generate $957 million in savings on a yearly basis. This translates to a $7,833 savings per-pupil.

“The fiscal impact on the state is the difference between the cost of the ESA and the state’s cost to fund the child’s education in the public school system,” the analysis notes. “Many school choice policies tie awards to a state’s portion of education funding. School districts typically keep revenue from local property taxes and some federal revenue. As awards are usually less than the state’s total per-student cost to educate students in public schools, choice programs usually generate savings for the state and school districts, and a byproduct of these programs is that the amount of resources for each student who remains in a district school increases.”

These are not the only analyses and studies pointing out the benefit of education choice programs. Copious empirical research on choice programs finds they offer families improved access to high-quality schools that meet their children’s unique needs and circumstances. Moreover, these programs improve access to schools that deliver quality education inexpensively. Additionally, these programs benefit public school students and taxpayers by increasing competition, decreasing segregation, and improving civic values and practices.

It is probably for these reasons that ESAs are more popular with parents than ever before. Polling done by EdChoice released in December 2020 found 81 percent support for ESAs among the general public and 86 percent among current school parents, the highest level of support the program has received in the organization’s eight years of polling on the issue. This represents a four percentage point increase over 2019. These findings are mirrored in the American Federation for Children’s sixth-annual National School Choice Poll, released in January 2020, which saw 80 percent support for ESA programs.

“Education savings accounts can help address some of New Jersey’s troubled finances with a plan that improves one of its biggest and most costly service— public education—while preserving its unique and time-honored character,” the analysis concludes. “For some, K-12 education is a zero-sum game where supporting educational choice and opportunity means opposing and harming the public school system. The large body of research on private school choice programs, however, suggests otherwise. Rather than K-12 being a zero-sum game, expanding educational opportunities for New Jersey families would accrue benefits, both fiscal and nonfiscal, across the state. These programs not only benefit students participating in them, but they also accrue benefits for parents, communities, and even public schools themselves as well.”

New Jersey legislators would do well for their constituents by taking up and enacting an ESA program in the 2021 legislative session. The goal of public education in the Garden State today and in the years to come should be to allow all parents to choose which schools their children attend, require every school to compete for every student who walks through its doors, and make sure every child has the opportunity to attend a quality school.

Fiscal Analysis of an Education Savings Account Program in New Jersey
https://www.edchoice.org/wp-content/uploads/2020/11/NJ-Fiscal-Brief-1.pdf
This EdChoice brief discusses the potential fiscal effects of education savings accounts for K-12 in New Jersey on the state and local taxpayers and finds a program could save between $97 million and $957, depending on the size of the ESA award and the number of students making use of the scholarships.

Child Safety Accounts: Protecting Our Children through Parental Freedom
https://www.heartland.org/_template-assets/documents/publications/CSAccountsPB.pdf
In this Heartland Policy Brief, Vicki Alger, senior fellow at the Independent Women’s Forum and research fellow at the Independent Institute, and Heartland Policy Analyst Tim Benson detail the prevalence of bullying, harassment, and assault taking place in America’s public schools and the difficulties for parents in having their child moved from a school that is unsafe for them. Alger and Benson propose a Child Safety Account program, which would allow parents to immediately have their child moved to a safe school – private, parochial, or pub­lic – as soon as parents feel the public school their child is currently attending is too dangerous to their child’s physical or emotion­al health.

The Effects of School Choice on Mental Health
https://papers.ssrn.com/sol3/papers.cfm?abstract_id=3272550
This study from Corey DeAngelis at the Cato Institute and Angela K. Dills of Western Carolina University empirically examines the relationship between school choice and mental health. It finds that states adopting broad-based voucher programs and charter schools witness declines in adolescent suicides and suggests that private schooling reduces the number of times individuals are seen for mental health issues.

A Win-Win Solution: The Empirical Evidence on School Choice (Fourth Edition)
http://www.edchoice.org/wp-content/uploads/2016/05/A-Win-Win-Solution-The-Empirical-Evidence-on-School-Choice.pdf
This paper by EdChoice details how a vast body of research shows educational choice programs improve academic outcomes for students and schools, saves taxpayers money, reduces segregation in schools, and improves students’ civic values. This edition brings together a total of 100 empirical studies examining these essential questions in one comprehensive report.

The Public Benefit of Private Schooling: Test Scores Rise When There Is More of It
https://object.cato.org/sites/cato.org/files/pubs/pdf/pa830.pdf
This Policy Analysis from the Cato Institute examines the effect increased access to private schooling has had on international student test scores in 52 countries. The Cato researchers found that a 1 percentage point increase in the share of private school enrollment would lead to moderate increases in students’ math, reading, and science achievement.

The Effects of the Florida Tax Credit Scholarship Program on College Enrollment and Graduation: An Update
https://www.urban.org/sites/default/files/publication/99728/the_effects_of_the_florida_tax_credit_scholarship_program_on_college_enrollment_and_graduation_0.pdf
In this update to a 2017 Urban Institute study, authors Matthew Chingos, Tomas Monarrez, and Daniel Kuehn find students participating in the Florida Tax Credit Scholarship Program are 99 percent more likely to enroll in a four-year college, and 56 percent more likely to graduate, than their public school peers.

Fiscal Effects of School Vouchers: Examining the Savings and Costs of America’s Private School Voucher Programs
https://www.edchoice.org/wp-content/uploads/2018/09/Fiscal-Effects-of-School-Vouchers-by-Martin-Lueken.pdf
In this EdChoice study, Director of Fiscal Policy and Analysis Martin F. Lueken examined the fiscal impact of voucher programs across America—from their inception through fiscal year 2015—to determine whether they generated costs or savings for state and local taxpayers. Lueken found these programs generated cumulative net savings to state and local budgets of $3.2 billion. This represents a $3,400 savings per voucher recipient.