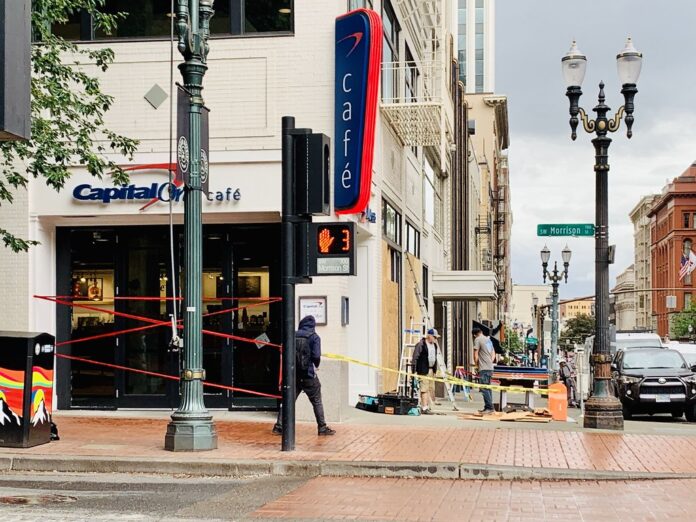 In addition to setting fires, the mob launched fireworks at buildings and at police. Portland police attempted to gain control, eventually declaring the situation a riot. A flyer for the event said it was “In Solidarity with BLM.”

The Antifa anarchists used commercial-grade fireworks, firebombs, and Molotov cocktails to attack police as the latter tried to defend businesses and other properties in downtown Portland, Conservative Patriots reports.

“We should be clear about what this was last night,” Portland Police Chief Chuck Lovell said in a press conference. “This was about violence and destruction, period.”

“My good-faith efforts at de-escalation have been met with ongoing violence and even scorn from radical Antifa and anarchists,” Wheeler said in a New Year’s Day press conference.

“It’s time to push back harder against those who are set on destroying our community and to take more risks in fighting lawlessness,” Wheeler said.

Wheeler asked federal and state authorities for help in dealing with “anarchist violence” and asked the state legislature to increase penalties on people who “repeatedly engage in criminal destruction and vandalism,” Fox 12 reports.

The unrest in Portland has left businesses with significant expenses and dramatically increased insurance costs. Portland businesses have suffered $23 million in damages due to rioting. In some cases, the businesses are no longer able to obtain insurance coverage at all, One America News Network reports.

“Businesses have moved out,” a Portland resident who requested anonymity told Budget and Tax News. “It’s horrible that we have such a small group of people creating so many problems.”

Throughout months of rioting, Wheeler accused President Donald Trump of inciting the violence, blaming him for the unrest in Portland. When Trump offered to send federal assistance and law enforcement officers to quell the riots, Wheeler refused them, Budget and Tax News reported. Now, with Trump preparing to leave office, the lawlessness continues.

Shortly after the media declared Joe Biden the winner of the November presidential election, Portland Antifa organized a “violent anti-Joe Biden protest.” The rioters smashed windows and graffitied walls with slogans promoting anarchy and the BLM movement, The Federalist reports.

It is not easy to understand what the violence is about, says conservative columnist Victor Davis Hanson.

“Many in the streets seemed as interested in taking selfies as they were in smashing windows,” Hanson wrote at Townhall.

The Antifa mob seems emboldened instead of satisfied with the election of Joe Biden, says Federalist staff writer Jordan Davidson. Biden says he wants peace, but Portland antifa will reject him just as they have rejected Wheeler, Davidson says.

“Nothing is good enough for them,” Davidson writes for The Federalist. “They may have hated Trump, but they hate Biden just as much. And their cries of ‘F— Trump, F— Biden, death to America! We want something better than this trash, and we’re going to take it’ will continue.”

Antifa also vandalized the homes of House Speaker Nancy Pelosi (D) and Senate Majority Leader Mitch McConnell (R) after the two houses of Congress failed to reach agreement on a proposed further large increase in federal COVID-19 economic relief funding, Bloomberg reports. Photos documented graffiti on both houses. On Pelosi’s garage the message read, “We want everything.” McConnell referred to the vandalism as “a radical tantrum.”

“Despite some Democrats’ high hopes that unity could be achieved once the bad orange man left office, it is clear that, as many conservatives tried to warn earlier in the year, the mob is insatiable,” Davidson writes. “The people who are arrested for rioting and destroying property in Portland only to be released and start the process all over again don’t care about Biden or the Democrats’ political chatter. They desire anarchy. They want revenge. They long for chaos. And they won’t stop on their own.”

“The brand of the anarchist is not logic but envy-driven power: to take it, to keep it, and to use it against purported enemies—which would otherwise be impossible in times of calm or through the ballot box,” Hanson writes.