The states siphoned off 21 percent of gas taxes and other highway user fees to pay for mass transit and other non-highway activities in 2019, according to table SDF of the 2019 Highway Statistics, which was posted this week by the Federal Highway Administration. The table shows that $9.8 billion in highway user fees were spent on transit and $15.1 billion were spent on other non-highway activities for a total of nearly $25 billion out of the $120 billion collected by the states from highway users. 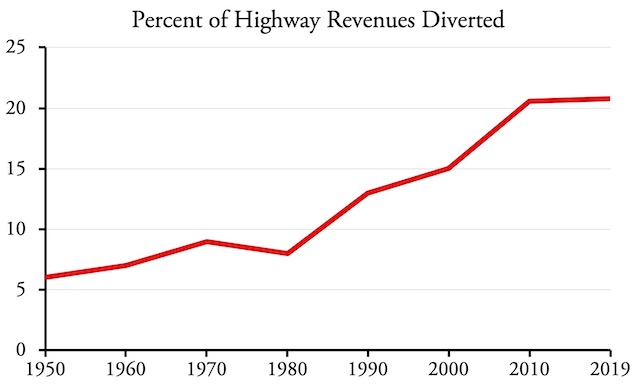 In terms of total dollars, the worst offender was Texas, which spent more than half of the user fees it collected, nearly $6.5 billion, on education and other non-highway activities. Transit received an insignificant portion of Texas’ highway revenues.

Transit did best in the District of Columbia, where it received 95 percent of gas taxes and other user fees. It also did well in Maryland, receiving 40 percent of highway revenues followed by Connecticut at 38 percent. Transit got more than 20 percent in Minnesota, Pennsylvania, and Wyoming, 18 percent in Illinois, but only 9 percent in California.

The highway lobby has long sought to dedicate all highway user fees to highways, which makes as much sense as dedicating the revenues from milk to dairies, while the transit lobby has sought to get as much highway revenues as it can, which makes as much sense as dedicating revenues from milk to bakeries. The highway advocates never really achieved their goal: in 1950, 6 percent of user fees went to non-highway uses. By 1980 it was still only about 8 percent, but then it rapidly grew, possibly because Congress’ decision to divert some federal gas taxes to transit legitimized the policy.

Nor did transit ever get as much as it wanted (which is all that it imagines it can get), receiving only 39 percent of the diversions in 2019. That’s mainly due to Texas, but Kansas, Montana, and Oklahoma also spend more than 40 percent of user fees on non-transportation activities, while New Jersey was 37 percent.

Alaska was the only state that spent no highway user fees on non-highway activities, but several others came close. Indiana, Missouri, and Nevada spent less than half a percent of user fees on general programs, while Alabama, Colorado, and Iowa spent less than 2 percent and Nebraska and New Hampshire under 3 percent. Local governments, according to table LDF managed to spend 100 percent of their share of state user fees and 100 percent of local fuel taxes on roads and streets, but did spend a share of local highway and bridge tolls on mass transit, mainly in New York.

Diverting highway user fees to non-highway programs creates two problems. First, funding transit, education, and other programs out of revenues over which they have no control makes those programs inefficient and reduces their resiliency. Second, taking money from highway agencies increases their dependence on general funds, reducing their efficiency and resiliency.