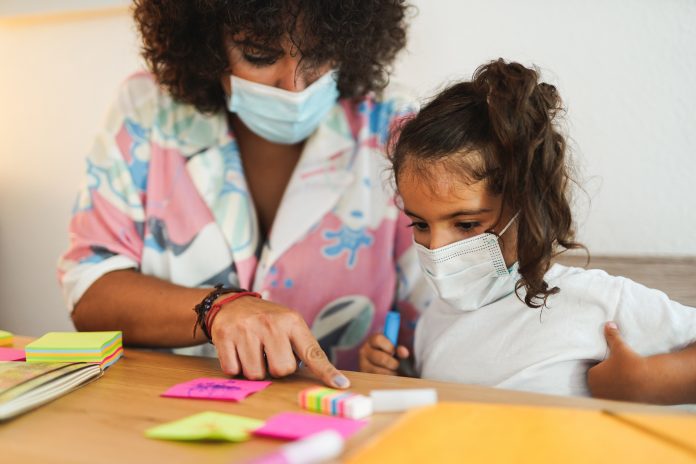 The reopening of Illinois’ public schools for in-person education has become a struggle between districts hoping to curb the documented learning loss of their students forced into virtual education and teacher unions who say their members will die if they’re sent back into classrooms.

Stuck in the middle are families who, as surveys continue to show, are suffering lasting financial hardship from losing the ability to leave for work.

In December, the U.S. Chamber Foundation released a report on the importance of childcare in today’s modern workforce and how pandemic-induced closures of schools and daycares.

They cite an October survey that said 20% of parents were likely to quit their job if their school went entirely virtual for a prolonged period of time since they would need to stay home with their children.

Illinois closed down childcare services in early March 2020, only to reopen some with new restrictions later that month and prioritize the children of essential workers. Others were allowed to reopen in late May. The following months of school left parents with few choices and big bills for daycare if it could be found.

As for a solution, Gov. J.B. Pritzker has echoed President Joe Biden’s plan for free childcare via government programs. Scott Centorino, a senior fellow at the Foundation for Government Accountability, says cutting through the hurdles keeping qualified providers from offering their services is a better approach.

“A lot of it, both before the pandemic and the existing problem of daycare…a lot of that is caused by the government itself, if not all of it,” he said.

For instance, the Illinois Department of Children and Family Services dictates that floors in a home daycare space “shall have protective covering such as, but not limited to, tile, carpet or linoleum. Paint or sealer alone is not acceptable as a protective covering,” something Centorino said rules out perfectly safe wood-floored homes.

He points out that Illinois’ requirements to become a childcare facility director require years of post-secondary education and then additional years of on-site work experience and certifications.

Home daycare providers must abide by those rules once they’re caring for more than three children, including their own. That also applies to a family that lives in a different household.

These regulations, Centorino said, aim to create safeguards for children but serve to eliminate more options for families that need them.

“I think it’s impossible to imagine anything close to a full recovery without solving the daycare issue,” he said.

Cole Lauterbach
Cole Lauterbach reports on Illinois and Arizona government and statewide issues for The Center Square. He has produced radio shows for stations in Central Illinois and created award-winning programs for Comcast SportsNet Chicago.