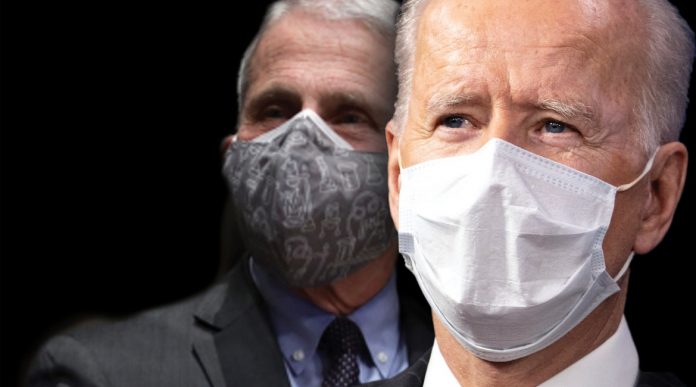 With growing evidence that COVID-19 has reached its peak in the United States, including steady declines in the number of cases, hospitalizations, and deaths, will the country soon be shifting away from the policies imposed a year ago to stem the spread of the disease?

Recent statements by President Joe Biden and his chief medical advisor Anthony Fauci suggest a reluctance by key policymakers to loosen the grip on a population growing restive over the restrictions placed on their behavior.

During a February 19 tour of a Pfizer manufacturing plant in Portage, Michigan, Biden said the country could return to normalcy by the end of the year, provided logistical challenges with the distribution of vaccines could be overcome.

“I can’t give you a date when the crisis will end,” Biden said. “I can tell you we’re doing everything possible to have that day come sooner rather than later.”

For his part, Fauci believes it’s “possible” Americans could be wearing masks into 2022.

“As we get into the fall and winter, by the end of the year, I agree with [President Biden] completely that we will be approaching a degree of normality,” Fauci told CNN on February 19.

The White House has doubled down on masks, with the president issuing executive orders in January requiring masks for interstate travelers and for people on federal property.

“There are things, even if you are vaccinated, that you’re not going to be able to do in society: for example, indoor dining, theaters, places where people congregate,” Fauci said. “That’s because of the safety of society.”

CNN, a media outlet close to the administration, expressed similar views. While acknowledging the falling number of new coronavirus cases, CNN said on February 21 that 70 percent to 85 percent of Americans needed to be vaccinated and immune before herd immunity is achieved. CNN’s figure is puzzling, given that vaccines are not being administered to people 16 and younger, making it mathematically difficult to achieve such a high percentage. Also, people that young have barely been touched by the pandemic, with the disease overwhelmingly affecting those 65 and older.

The source of CNN’s figure may well be Fauci, who has flip-flopped on his measurement of herd immunity. After adhering to the traditional herd immunity threshold of 60 percent to 70 percent, Fauci, in late December, moved the goalposts to 75 percent, then 80 percent, and, finally, 85 percent. Fauci told the New York Times that his conflicting statements were influenced in part by “his gut feeling that the country is finally ready to hear what he really thinks.”

Fauci’s remarks prompted Vinay Prasad, a former National Institutes of Health fellow, to raise what he says is a “thorny and important question for scientists, doctors, and public health experts: Is it acceptable to distort the truth to get them to do what you want them to do?”

Viewing the same data available to the Biden administration and CNN, Marty Makary, M.D. a professor of medicine at Johns Hopkins School of Medicine and Bloomberg School of Public Health, concludes that the U.S. could reach herd immunity by April.

“[T]he consistent and rapid decline in daily cases since January 8 can be explained only by natural immunity,” wrote Makary in the Wall Street Journal on February 19. “Behavior didn’t suddenly improve over the holidays; Americans traveled more over Christmas than they had since March.  Vaccines also don’t explain the steep decline in January.  Vaccination rates were low, and they take weeks to kick in.”

Makary adds that COVID-19 deaths in the United States would also suggest much broader immunity.

“About 1 in 600 Americans has died of Covid-19, which translates to a population fatality rate of about 0.15 percent,” Makary points out. “The Covid-19 infection fatality rate is about 0.23 percent. These numbers indicate that about two-thirds of the U.S. population has had the infection.”

The measures taken to snuff out the pandemic have put unprecedented power into the hands of policymakers and have been financially rewarding for vaccine manufacturers, mask makers, hospitals, and people in the “contagion-containment” business.  This could explain the desire by some to see the pandemic, or the policies adopted to combat it, stretch out for as long as possible.

One of those benefitting financially from COVID-19 may soon be joining the Biden administration.

Vivek H. Murthy, who advised Biden on the pandemic during the 2020 presidential campaign, has come under close scrutiny after being nominated to be the next surgeon general.

“Murthy was paid millions of dollars last year in coronavirus-related consulting for Carnival Corporation’s cruise lines, Airbnb’s rental properties, and other firms, in addition to collecting hundreds of thousands of dollars in speaking fees from dozens of organizations, according to ethics documents Murtha filed this month,” the Washington Post reported February 21.

“The disclosure caught the attention of longtime health policy hands – saying that Murthy has the most financial entanglements of any surgeon general pick in recent history – and of watchdogs who raise questions about how credible he would be as a spokesperson on the pandemic response and presidential adviser,” noted the Post.