CDC Appears to be Wrong on Race

Rochelle Walensky, M.D., director of the Centers for Disease Control and Prevention (CDC), stated “racism is a serious public health threat that directly affects the well-being of millions of Americans.”

The CDC launched a web portal, Racism and Health, which explains what it means by “racism.”

“Racism is a system consisting of structures, policies, practices, and norms – that assigns value and determines opportunity based on the way people look or the color of their skin,” the web portal states. “This results in conditions that unfairly advantage some and advantage others throughout society.”

However, new income figures revealed in the U.S. Census Bureau 2018 American Community Survey paint a different picture of race in the nation. A number of households “of color,” mostly Asian-Americans, outpace “White-Americans” in median household income (see graph below).

“Are there people in our society who are dedicated to holding back black America?” asks the Committee to Unleash Prosperity. “Absolutely, yes. They are the politicians and teacher union members who refuse to allow black children to go to good schools; they are people who will require black workers to put their retirement money in Social Security, even though every day the system that robs them of opportunities to build up real wealth; they are the people who erected a welfare state that has plunged black Americans into three generations of poverty.” 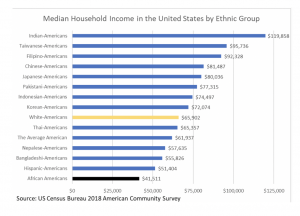 Cash for Medicaid Enrollees Gets Attention

“The private insurance people already have is better than Medicare, which has huge gaps in coverage.”
Read more
Health Care News

In addition to Texas and Florida, other states – either through executive orders, legislation, or governors’ pronouncements – have said no to vaccine passports.
Read more