U.S. economic growth slowed to a 2 percent annual rate in the third quarter of the year, the federal Bureau of Economic Analysis reports:

Real gross domestic product (GDP) increased at an annual rate of 2.0 percent in the third quarter of 2021, following an increase of 6.7 percent in the second quarter.

That amounts to a nearly 5 percentage point decrease in the annual economic growth rate since the second quarter.

The bureau stated that government lockdowns held growth down by reducing consumer spending—a standard Keynesian analysis that suggests demand for goods and services creates the supply:

The deceleration in real GDP in the third quarter was led by a slowdown in consumer spending.

A resurgence of COVID-19 cases resulted in new restrictions and delays in the reopening of establishments in some parts of the country.

The bureau also blamed a decrease in government spending for the economic slowdown, another Keynesian assumption:

In the third quarter, government assistance payments in the form of forgivable loans to businesses, grants to state and local governments, and social benefits to households all decreased.

Employment income accounted for the increase in current-dollar personal income, the bureau reports:

The increase primarily reflected an increase in compensation that was partly offset by a decrease in government social benefits for unemployment insurance and direct economic impact payments to households established by the Coronavirus Response and Relief Supplemental Appropriations Act and the American Rescue Plan Act.

The government’s report makes no mention of supply-line disruptions or increasing government regulations on the economy, and especially the energy sector, as reducing economic growth.

Instead, the bureau alludes obliquely to the capital goods shortages and supply line disruptions but blames these on a decrease in consumer spending, another Keynesian analysis that reverses the causality relationship between supply and demand and fails to explain why consumers spent more on services and less on goods: 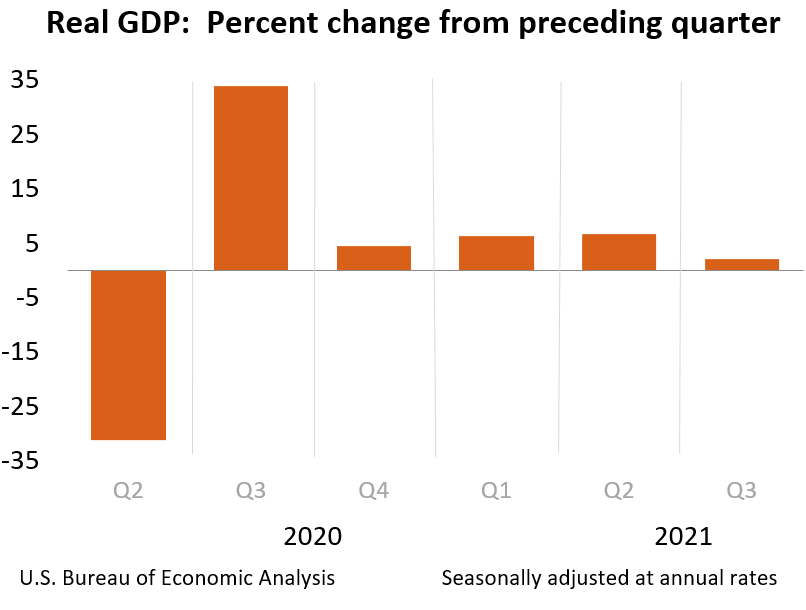