Ten years ago, I published an article in realclearmarkets titled “Live Free or Die – Literally.”  The data in the article clearly showed that people in countries with greater economic freedom lived longer lives, were wealthier and happier.  Ten years later, it is time to see if the relationship between economic freedom and these positive outcomes persists and whether economic freedom is predictive for future prosperity.

The Heritage Foundation calculates an economic freedom index annually for almost all countries around the world based on ten factors: business freedom, trade freedom, fiscal freedom, government spending, monetary freedom, investment freedom, financial freedom, property rights, freedom from corruption, and labor freedom.  For this article, I used the 2019 data, which is not impacted by short-term swings in life expectancy or freedom index results due to COVID-19 policies or deaths.

The Heritage Foundation breaks down the list into five subgroups ranging from free economies to repressed economies.  I compared these subgroups in both years to average life expectancy from the World Health Organization, per capita gross domestic product at purchasing power parity, and the Gallup Happiness Index.  Since some people claim that supporting economic freedom is supporting greed, this year, I added data from the CAF World Giving Index to the analysis to test their claim.  The average data by each group are shown below.

Like the results from ten years ago, the data show remarkable differences in outcomes for health, wealth, and happiness.  The lack of economic freedom in the repressed countries shortens the average life expectancy by 16 years compared to economically free countries.  Per capita GDP is almost ten times greater for economically free countries compared to repressed countries.  These improvements from greater economic freedom reveal themselves in the happiness index as well.

As discussed ten years ago, one way to test the impact of economic freedom is to take a common people, split them into groups with different levels of economic freedom and measure the outcomes.  Unfortunately, such an arrangement has been carried out with the Chinese people.  Hong Kong has historically been an economically free area, with Taiwan mostly free, while the People’s Republic of China has been mostly unfree.  Again, the data show that more economic freedom leads to better outcomes across the board. 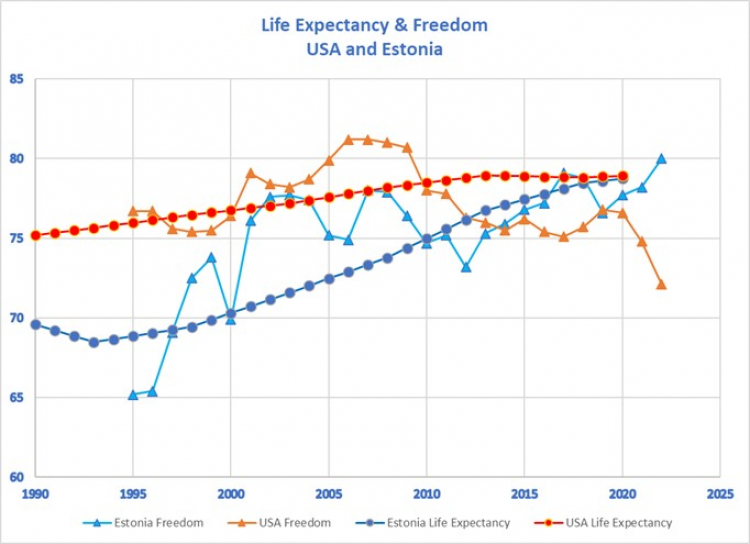 Giving is a more complicated measurement and is affected by multiple variables such as culture, religion, and wealth.  The Charities Aid Foundation (CAF) issues an annual giving index ranking people in countries on three factors: 1) helped a stranger or someone you didn’t know who needed help, 2) donated money to a charity, and 3) volunteered your time to an organization.  The data show that people in countries with greater economic freedom are more generous.  The data also show the long-lasting damage from a collectivist government to a culture of giving.  Of the ten consistently lowest-rated countries in the report, eight are either current or former Communist/Marxist countries, with the People’s Republic of China as the least generous nation on earth.  An ideology that claims to espouse the common good is corrosive to the soul of a nation with long-lasting cultural damage towards individual giving.

One great frustration since the start of the pandemic is the number of people who have tried to associate freedom with selfishness, going so far as to put the word in quotation marks.  They say that freedom must be sacrificed to save lives for the common good.  Sacrificing freedom costs lives, creates poverty, and leads to selfishness.  To paraphrase Benjamin Franklin: Those who would sacrifice long-term freedom to save lives obtain neither.