Cato scholars have been long skeptical of antitrust laws and their application. One problem we’ve highlighted time and again is that, just as panicked authorities get around to “dealing with” today’s supposed unassailable monopolies, the market economy has moved on, with the firm in question faltering or getting cannibalized by the latest gales of economic creative destruction.

A good exhibit of this relates to new proposed antitrust legislation for digital platforms. Senator Amy Klobuchar’s American Innovation and Choice Online Act (which we’ve reviewed here) aims to stop online platforms from “self‐​preferencing” their own products and services. The bill, though, was constructed specifically to target today’s “Big Tech” firms, such as Google, Meta, Amazon, Microsoft, and Apple.

To be covered under the proposed legislation, companies must have at least 50 million monthly active U.S. users on their online platform. They must also have either a) net sales in the 2 years before being covered of $550 billion, b) a market capitalization over that same period averaging $550 billion in any 180‐​day period, or c) at least 1 billion global users in the previous 12 months before being designated. All these thresholds were designed to ensure the current bête noires of today’s trustbusters were ensnared.

This week’s events show the arbitrariness of this criteria. Meta (formerly Facebook) has seen its market capitalization plunge from almost $900 billion at the end of last October to a low of $263 billion yesterday (see Figure 1). The company has therefore lost over 70 percent of its value in just 12 months, becoming similar in worth to Home Depot. One certainly does not rule out that the company’s pivot to the metaverse might pay long‐​run dividends. But recent events suggest that investors do not believe — as some lawmakers do — that the company has anything nearing entrenched monopoly power. 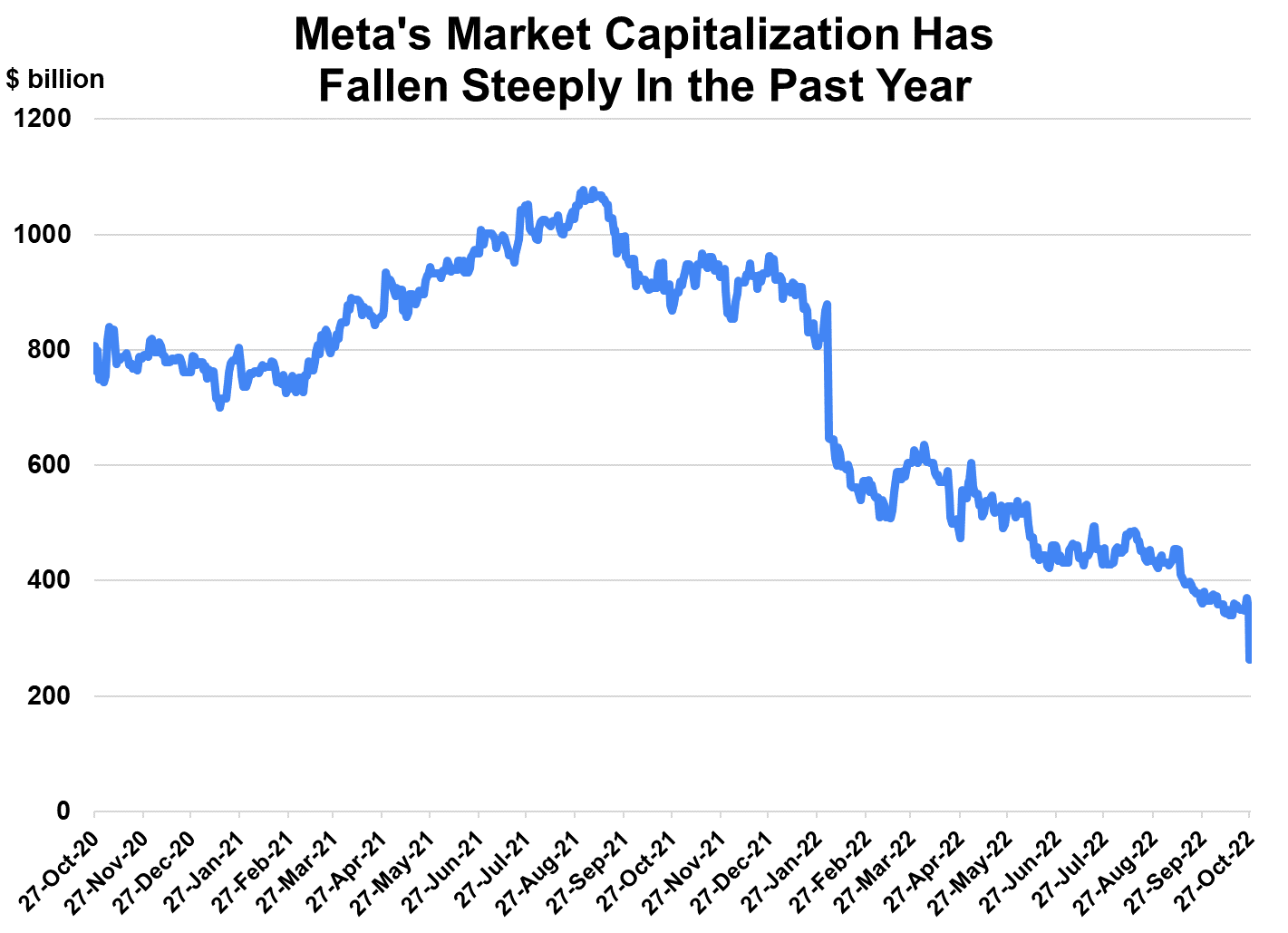 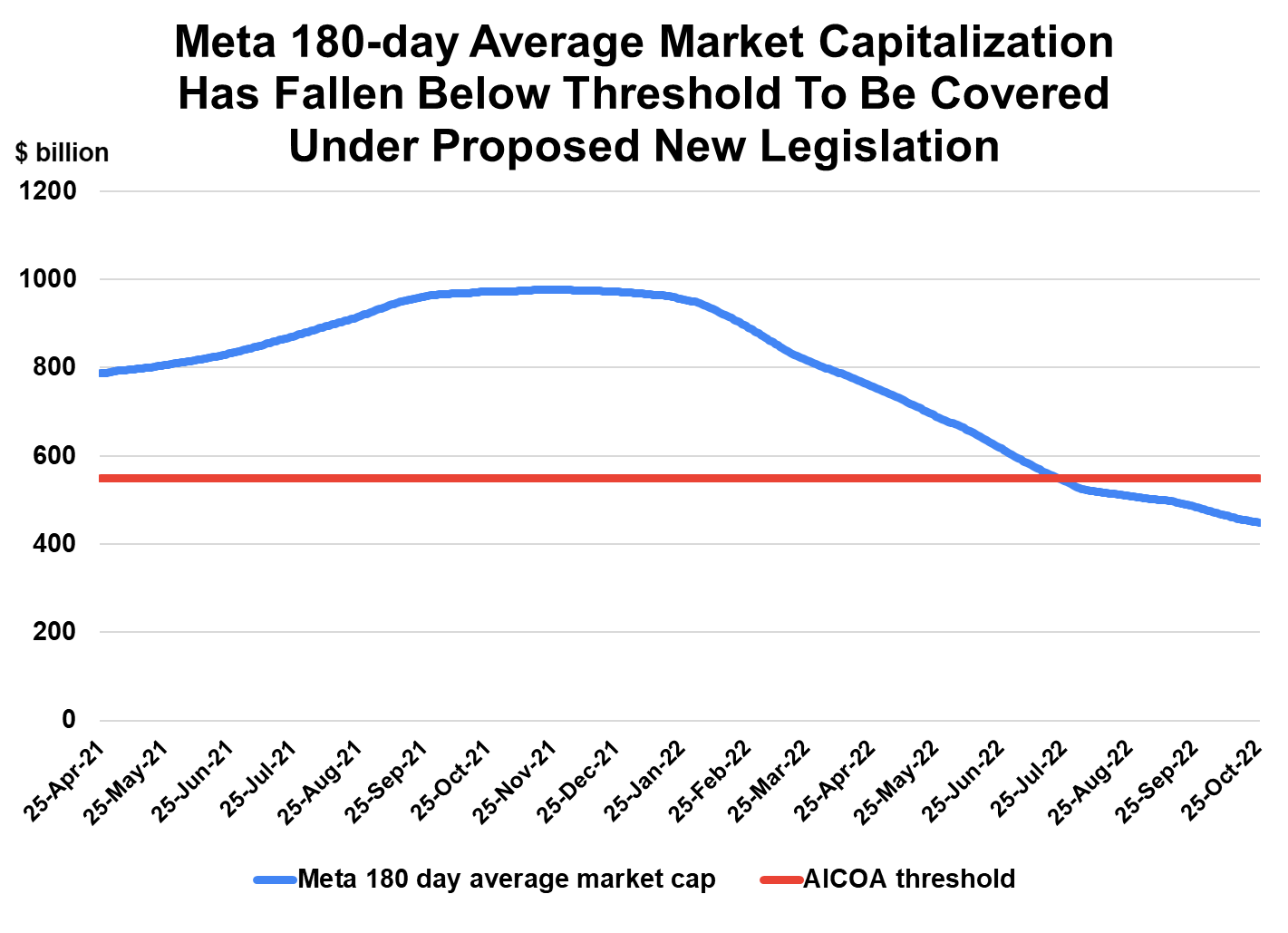 If this bill becomes law, then the company would still end up being designated as a covered entity by virtue of either its large global user base or its historic value. But on the market capitalization metric set out by lawmakers, it’s currently trading at less than half the value the bill deems problematic.

This all goes to show the extent to which these legislative thresholds are arbitrary and hyper‐​focused on lassoing Big Tech companies using several different ropes. Legislators are trying to create a two‐​tier system of antitrust in the United States, where laws governing conduct are different for companies depending on the size of their user base or their market capitalization. In a dynamic world where these outcomes are ever‐​changing, this makes no economic sense.

Originally published by the Cato Institute. Republished with permission under a Creative Commons Attribution-NonCommercial-ShareAlike 4.0 International License.

Ryan Bourne
Ryan Bourne occupies the R. Evan Scharf Chair for the Public Understanding of Economics at Cato and is the author of the recent book Economics In One Virus. He has written on numerous economic issues, including fiscal policy, inequality, minimum wages, infrastructure spending, the cost of living and rent control.