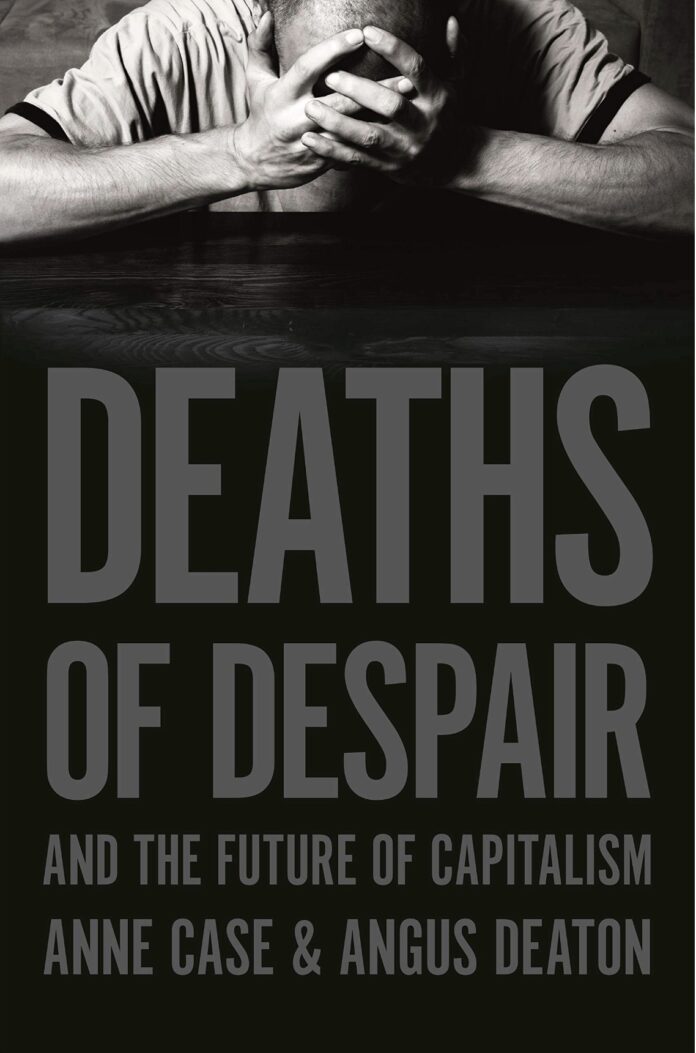 Review of Deaths of Despair and the Future of Capitalism, Anne Case and Angus Deaton, Princeton University Press, March 2020

The American health care industry is undergoing a massive stress test from the coronavirus. For months and years to come, analysts will be issuing their opinions about just how well that industry performed under the incredible, sudden surge of the pandemic.

Given the massive influx of stimulus funding for health care and government programs such as Medicare, no one should be surprised about a barrage of new lobbying activity and a surge of activism for single-payer or universal health care. Getting just ahead of that surge are Angus Deaton and Anne Case, two distinguished economics scholars, with the publication in March of their book Deaths of Despair and the Future of Capitalism (Princeton University Press). The book explores rising death rates from suicide, drug overdose and alcoholism, but more specifically, the health care sector’s role.

The Rich Stealing from the Poor?

American health care, the authors argue, is the most expensive in the world and delivers the worst outcomes of any advanced nation, making it “a cancer at the heart of the economy.”

In Case and Deaton’s view, discussed in the book and in a video interview, American health care is a Sheriff of Nottingham con game—the rich stealing from the poor—with no Robin Hood in sight. The industry, they claim, “is not very good at promoting health” but delivers vast riches to physicians, pharmaceutical companies, medical device manufacturers, health insurers, and hospitals. And all of it is protected by a potent lobbying effort in Washington, the writers argue.

Case and Deaton have written a scholarly work, much more sociological than economic in its outlook, and heavy on references to public health data, statistical surveys, and other researchers’ work. For a book with the word “despair” in its title, it communicates with about as much pathos as a statistical abstract.

Overall, Case and Deaton are not suggesting free markets don’t have their place or haven’t produced immense benefits. But in health care, one of the chief villains in their story, they argue the “social benefits” just aren’t there.

The authors are serious people. Deaton, author of The Great Escape: Health, Wealth, and the Origins of Inequality, won the economics Nobel Prize in 2015 for his work on poverty. Case is the Alexander Stewart 1886 Professor of Economics and Public Affairs Emeritus at Princeton University.

Case and Deaton go into some detail on the deadly opioid crisis, and the culpability of pharmaceutical companies in that ongoing plague, but they say the problems in American health care go well beyond that.

Health insurance, Case and Deaton say, inordinately consumes personal income whether it is paid by the individual or through the shared cost of an employer plan. “It has often been noted that health insurance is less about protecting your health than protecting your wallet against the health care system,” the authors write. They look at the cost of health care as a form of reverse taxation where “squeezing even small amounts out of each of a large number of working people can provide enormous fortunes for the rich who are doing the squeezing. That is what is happening today, and we should stop it.”

To bolster their case, the authors cite the work of economist Kenneth Arrow, who they say concluded a “laissez-faire solution for medicine is intolerable.”

The authors agree with that thought. “Certainly, as market fundamentalists argue, competitive free markets (together with antitrust enforcement) would almost certainly deliver lower prices than those we see today,” the authors write. “But health care is not like other services. Patients lack the information that providers possess, which puts us largely in their hands. We are in no position to resist provider-driven overprovision, which can also happen with a garage mechanic, but with less serious consequences.”

Case and Deaton’s cure? Like good progressives, they advocate imposing some form of universal health care, noting there are “many options” and models for just how to do that. They concede that “no viable scheme can work without compulsion to prevent those who do not need insurance from refusing to pay, nor without cost control, which will cut the incomes of providers, not all of whom are extremely rich.”

Anyone who witnessed the debate over Obamacare, a thoroughly partisan project, should expect that Case and Deaton will get a lot of pushback on their claims. In an April 14 Washington Post column titled “Why this pandemic is an indictment of socialized medicine,” Marc Thiessen of the American Enterprise Institute says the coronavirus response calls into question “the dangerous idea that we should put the government bureaucrats who could not develop tests or stockpile masks, gowns and ventilators in charge of our entire health-care system.”

Deaths of Despair and the Future of Capitalism will find a receptive audience among progressives in an election year, for all sorts of reasons. The outcome of the race for the White House will have a huge bearing on whether another push for socialized medicine is ahead. Former Vice President Joe Biden, the current front-runner for the Democrats’ presidential nomination, has promised a major expansion of government support for health care, including a Medicare-type public option.

But whoever wins in November, the 2,829 health care lobbyists in Washington—by Case and Deaton’s count—are sure to remain very busy.

John Couretas (jcouretas@acton.org) is editor-at-large for the Acton Institute. This article was excerpted from “COVID-19, socialized medicine and deaths of despair,” a post published on the Acton Institute PowerBlog on April 22, 2020. Reprinted with permission.