Fifteen years ago, American higher education was beset with serious problems, especially rising costs, politicization of the curriculum, the mania over diversity, and falling academic standards. At that time, however, few people would have said that among its problems was the threat to freedom of speech on campus.

One scholar who did see that freedom of speech was coming under attack was University of Wisconsin professor Donald Downs. His book Restoring Free Speech and Liberty on Campus was an alarm bell in the night. Downs saw that the forces of intolerance and repression were gathering strength in academe.

Downs has now written a new book on this problem: Free Speech and Liberal Education: A Plea for Intellectual Diversity and Tolerance. Downs argues that each college and university ought to be an “intellectual polis” where people can study, teach, and research in an atmosphere of civility and respect. For most of our nation’s history, that is what they were, but not so today. Intellectual freedom on our campuses is “embattled,” he writes.

At many institutions, we find “conspicuous displays of intellectual intolerance” by faculty and students. They have been “abetted by an ever-growing campus administrative state” staffed by people who “nourish anti-free speech thinking and activism.”

Among the many pieces of evidence Downs cites is the infamous riot at Middlebury College, in Vermont, when political scientist Charles Murray tried to speak to an audience that had invited him. A student mob forced Murray and the faculty member who was to serve as moderator, Allison Stanger, to flee, during which Stanger was injured badly enough to need hospitalization. That part of the Middlebury story is very well known. What is not well known (and equally disturbing) is the aftermath: some faculty members wrote a statement deploring the incident and supporting freedom of speech, but a majority of the faculty refused to accept it.

Another particularly troubling incident involved Northwestern University professor Laura Kipnis. She was attacked by her students for having written an essay for The Chronicle of Higher Education in which she argued that American campuses were in the grip of “sexual paranoia” and the new Title IX rules imposed by the Obama administration were unfair.

Those were reasonable positions, and professor Kipnis supported her argument well. Nevertheless, a group of her students accused her of “harassing” them with her writing. The students were women deeply invested in the idea that American campuses are so fraught with peril to females that to dissent at all is the same as “harassment.” And as if that weren’t absurd enough, Northwestern’s administration sided with the students and subjected Kipnis to an investigation.

Downs laments that the culture of victimhood has become so deeply entrenched on our campuses that it is now dangerous to speak your mind. Scholars, he observes, are now afraid to publish criticism of ideas or books that might offend groups that have been conditioned to respond not with counterarguments but with official complaints or worse. 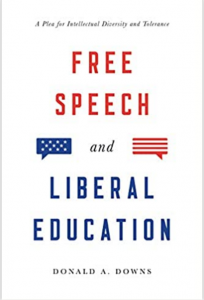 One point that particularly disturbs Downs is the way the “heckler’s veto” has become a tactic used by militant students against speakers who present arguments they dislike. Downs notes that the origin of the heckler’s veto was in the segregationist South: when speakers who advocated civil rights for blacks were harassed and shouted at by white opponents, law enforcement usually stepped in—but to arrest the speaker for “disturbing the peace.” Sadly, that’s how some college officials look at matters today. The problem is the outsiders, who have to be suppressed for the “safety” of all.

Similarly, at many schools, officials have designated tiny “free speech zones” where students may speak their minds. Their excuse is that free speech is so troubling to some that it must be restricted, as if, Downs says, free speech were like some contagious disease. Of all places, colleges should be the most free from speech restrictions, but instead students and faculty members find themselves in what Downs calls “intellectual straitjackets.”

We have even reached the point where, in law school classes, professors have to refrain from bringing up certain topics (sexual assault, especially) because they might “trigger” unhappy feelings in sensitive students.

How did we get from robust free speech on campus to having to walk on eggshells lest some hypersensitive students complain that their feelings are hurt or that certain ideas make them feel unsafe?

Downs argues that much of the blame should be placed on UC-Berkeley professor Herbert Marcuse, a 1960s radical who maintained that free speech is undesirable because it helps to keep what he regarded as bad ideas (such as private property, capitalism, limited government, etc.) in social dominance. What was necessary for progress, Marcuse said, was for those voices to be suppressed so that the claims of the “marginalized” groups could be heard.

It was a silly theory, but it hit the right notes with faculty and administrators who thought that their foremost task was to promote social justice. A great many of them have allied with “woke” students in trying to silence speech that questions anything about their agenda. Instead of teaching them knowledge and virtue, they pander to student passions.

One of Downs’ most telling arguments is that it takes courage to face challenging ideas. In a fair intellectual battle, you must be prepared to lose if you can’t defend your position, and if so, you should either strengthen your case or change your mind. (A fascinating instance that our author brings to light is the way U.S. Supreme Court Justice Oliver Wendell Holmes Jr. changed his mind about government restrictions on free speech in cases before the Supreme Court after World War I.)

Too often today, our educational leaders allow some students to “win” not through their brains but through coercion. In that, Downs writes, they “are letting our young people down, as well as our republic.”

Freedom of speech being thus “embattled,” what will help it emerge victorious? Downs points to several good tactics.

One of them is the phenomenon of independent centers on campus. They serve the crucial function of sheltering dissent from orthodoxies and widening the scope of the kind of diversity that really ought to matter: diversity of thought.

Another tactic is for faculty members, even if greatly outnumbered, to fight against measures that would stifle free speech. Downs gives some inspiring examples. For instance, at Clemson University, a group of three faculty members fought successfully to defeat a draconian speech code that zealous social justice warrior students were pushing. In another case, one of Downs’ former students singlehandedly shot down a speech code at Northern Illinois University by pointing out to the university’s general counsel that when challenged in court, the code was sure to lose. Downs observes that while you’d think a university’s lawyer would be familiar with First Amendment law, that’s often not the case.

Most important of all, colleges and universities should teach their students about the importance of free speech and the need to guard it. Downs’ own course on the First Amendment at the University of Wisconsin helped to protect free speech there. I would strongly recommend that other schools look for people (probably practicing or retired lawyers) who could teach that kind of course to their students.

That isn’t possible everywhere, but what is possible everywhere is for the administration to explain to incoming students the rules of academic discourse and the consequences for disregarding them. The University of Chicago has done that, and other schools ought to follow its lead.

And here’s one more good idea—stop force-feeding “diversity” to everyone on campus. Doing so does little or no good and emboldens the forces that want to dictate what others must believe. Downs argues that people will better learn about diversity naturally, from the “bottom up,” than by having it pushed on them in mandatory “training” sessions.

Free Speech and Liberal Education is a book that every educational leader should read.

What those officials have forgotten (if they ever knew it) was John Stuart Mill’s “human fallibility” argument: that because humans can be mistaken, it is imperative to allow all claims about truth and knowledge to be challenged. If they are true, challenges can only strengthen them.

Confronting Yet Another Indoctrinating School Year