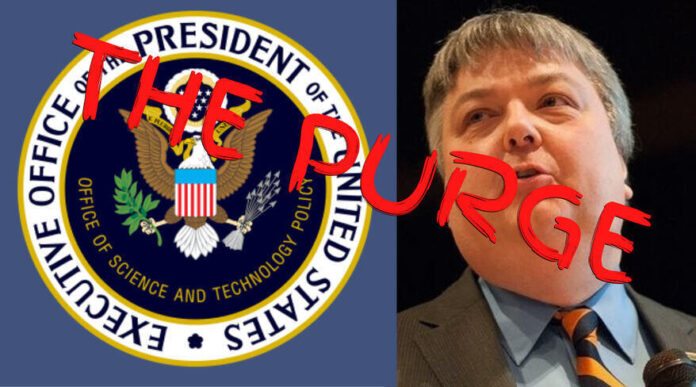 President Donald Trump has been sympathetic with the climate skeptics’ position, which is that there is no climate crisis, and that all currently proposed solutions to the “crisis” are economically harmful to the U.S. specifically, and to humanity in general.

Today I have learned that Dr. David Legates, who had been brought to the Office of Science and Technology Policy to represent the skeptical position in the Trump Administration, has been fired by OSTP Director and Trump Science Advisor, Dr. Kelvin Droegemeier.

The event that likely precipitated this is the invitation by Dr. Legates for about a dozen of us to write brochures that we all had hoped would become part of the official records of the Trump White House. We produced those brochures (no funding was involved), and they were formatted and published by OSTP, but not placed on the WH website. My understanding is that David Legates followed protocols during this process.

What follows is my opinion. I believe that Droegemeier (like many in the administration with hopes of maintaining a bureaucratic career in the new Biden Administration) has turned against the President for political purposes and professional gain. If Kelvin Droegemeier wishes to dispute this, let him… and let’s see who the new Science Advisor/OSTP Director is in the new (Biden) Administration.

I would also like to know if President Trump approved of his decision to fire Legates.

In the meantime, we have been told to remove links to the brochures, which is the prerogative of the OSTP Director since they have the White House seal on them.

But their content will live on elsewhere, as will Dr. Droegemeier’s decision.

READ BELOW THE ORIGINAL POSTING OF THE “WHITE HOUSE BROCHURES ON CLIMATE” — BEFORE THE PURGE — BY DR. SPENCER BELOW, AND HERE FOR THE ORIGINAL AT DRROYSPENCER.COM.

[NOTE: Dr. Spencer has hosted each of these documents on his own site, and we have uploaded them to our website in case the purges continue and widen.]

See a lot of the presentations by David Legates at The Heartland Institute’s 13 International Conferences on Climate Change at this archived link. He also took part in a debate challenge in NYC hosted by John Stossel in 2019. You can watch that here (the “other side” didn’t show up.) And if you want to see David Legates LIVE, he’s likely to be a presenter at Heartland’s 14th International Conference on Climate Change in Las Vegas April 16-17, 2021 in Las Vegas. Register for that conference here.

White House Brochures on Climate (There is no climate crisis)

Late last year, several of us were asked by David Legates (White House Office of Science and Technology Policy) to write short, easily understandable brochures that supported the general view that there is no climate crisis or climate emergency, and pointing out the widespread misinformation being promoted by alarmists through the media.

Below are the resulting 9 brochures, and an introduction by David. Mine is entitled, “The Faith-Based Nature of Human Caused Global Warming”.

David hopes to be able to get these posted on the White House website by January 20 (I presume so they will become a part of the outgoing Administration’s record) but there is no guarantee given recent events.

He said we are free to disseminate them widely. I list them in no particular order. We all thank David for taking on a difficult job in more hostile territory that you might imagine.

UPDATE (Jan 13, 3:50 p.m. CT): The links to these documents have been removed at the request of Dr. Legates. We hope to put them back up soon.

Systematic Problems in the Four National Assessments of Climate Change Impacts on the US (Dr. Patrick Michaels)

Is There a Climate Emergency (Dr. Ross McKitrick)

Field of Welfare: How COVID Funds Might Build a Money-Losing Ballpark in a Cornfield...

Budget & Tax News Heartland Author - August 12, 2022 0
By Matt Welch As Major League Baseball on Thursday takes to a remote Iowa cornfield for its second annual Field of Dreams game in commemoration of the...